Get ready for the biggest BOWL-A-RAMA yet

Can you believe it? Bondi BOWL-A-RAMA 2017 is almost here! General Pants is manning the ship once again, and following the success of last year's revamped two-day format, we've got another full weekend of shredding ahead. This weekend, Feb 18 and 19, Bondi Beach. Save the date.

As always, there's plenty to look out for in 2017. Tony Hawk returns once again, and he's bringing some of his OG Bones Brigade posse – including a comeback from Steve Caballero. Pedro and Bucky will go toe-to-toe once more in the pro division – but will the new blood finally go in for the kill? And, for the first time ever, there will be a dedicated girls division in contest format. Epic, right?

Pedro Barros's stranglehold on BOWL-A-RAMA has well and truly ended after Bucky Lasek claimed back-to-back wins in 2015 and 2016. Pedro was top dog for 20 years before that – or so it felt – and will undoubtedly be hungrier than ever to reclaim what he believes is rightfully his. Bucky is seriously bossing the game at the unfathomable age of 44, and his move toward more intricate and technical tricks has worked wonders in recent BOWL-A-RAMA shindigs. To put that in perspective, Tony Hawk won the master's division at BOWL-A-RAMA 2014 aged 45, and he would've stood no match against the pros. Bucky is a freak of nature. 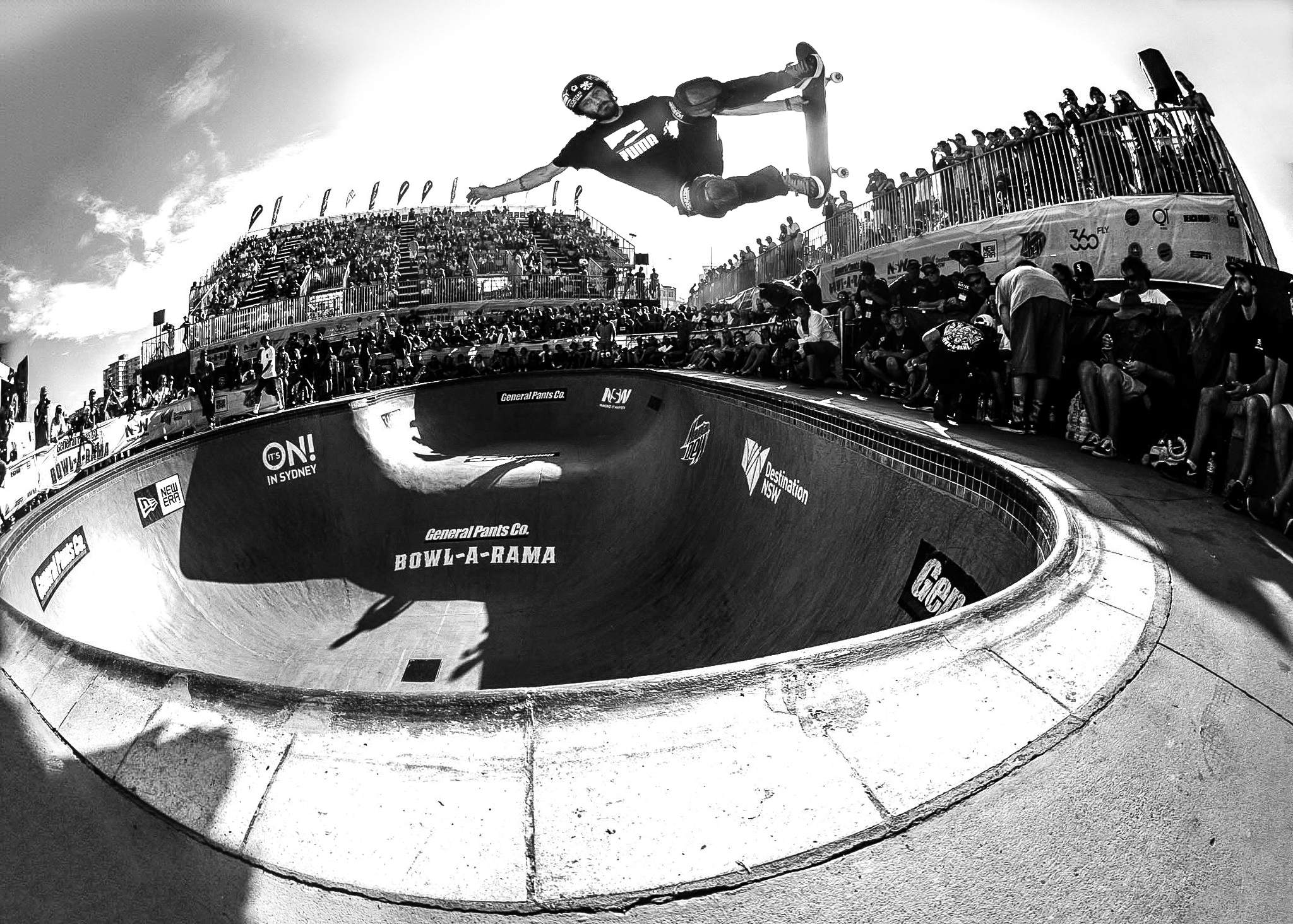 Pedro, on the other hand, is still only 21 (seriously?!). He's been winning pro events since he was a pre-teen, and dedicates his entire year to skateboarding, unlike Bucky. He's coming off a win at the 2016 Vans Pool Party and looks much sharper than previous years. If he makes his runs, he'll surely win – nobody skates the Bondi Bowl like Pedro; nobody has ever gone bigger or better than Pedro on his day. If he fails, though, he fails hard – just look at last year's 8th place finish. Will Bucky's technical lines be enough to stop Pedro's sheer gnarliness? Or will someone else emerge from the abyss?

With all the hype around Barros and Lasek, it's easy to forget that 16-year-old Cory Juneau was inches from actually winning BOWL-A-RAMA 2016. Cory grabbed second place with a string of super flowing runs, along with his trademark 540 variations, and looked as comfortable as anyone in the Bondi Bowl. He's a year older now, and will certainly be right up there come finals day this Sunday. There's no doubt Cory will win it eventually – but is 2017 his year? 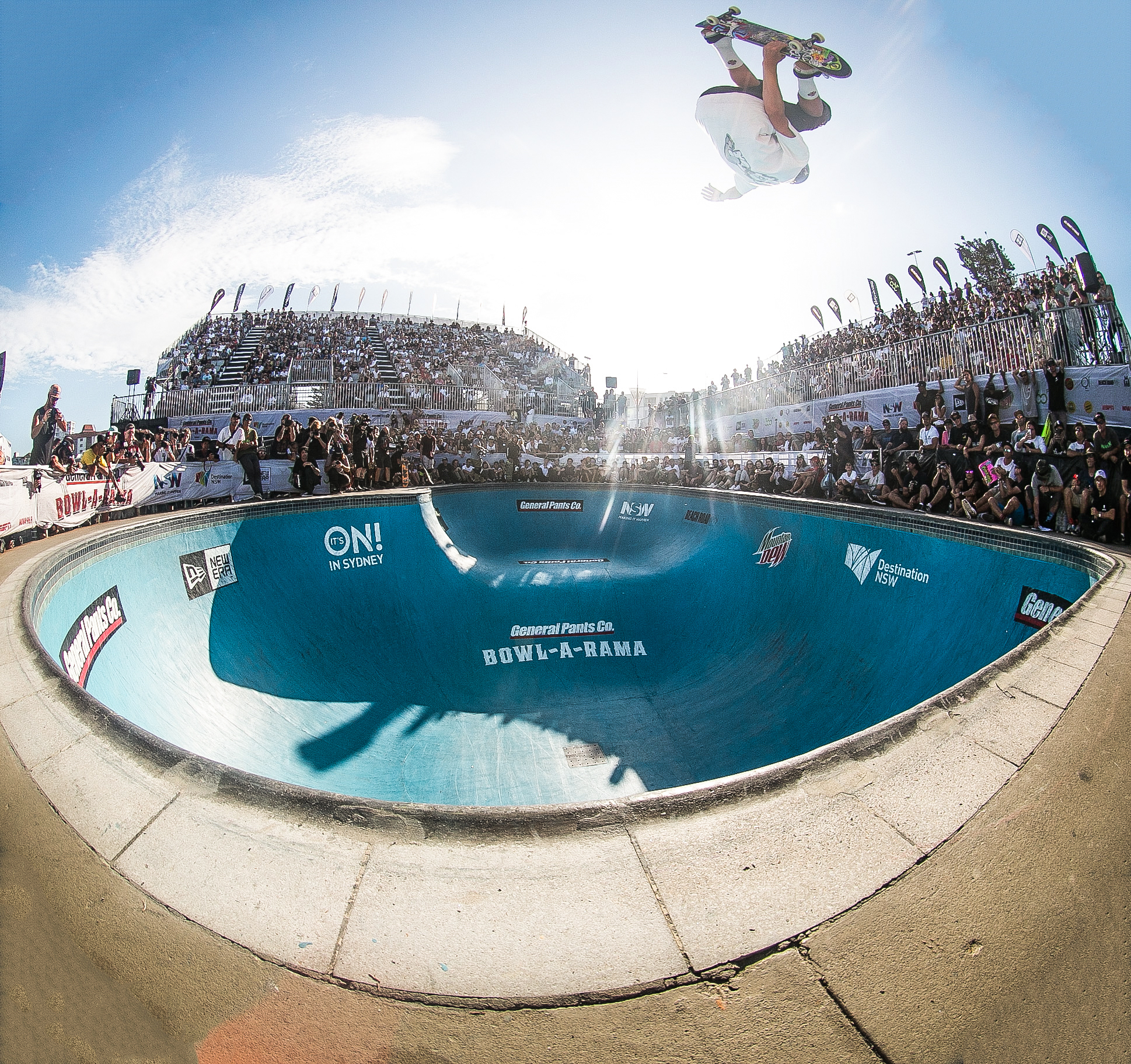 Tom Schaar also poached a podium spot in 2016, and the 17-year-old American will again go head-to-head with the best of them in 2017. His unbelievable backside ollies and pin-point style grabbed the attention of unfamiliar spectators last year, but this year the pressure and expectations are higher than ever. Trey Wood is even younger than those two at just 16, and he'll look to improve on his impressive 7th-place finish last time out. Whichever way you look at it, these teenage terrors have a genuine chance at claiming the top prize come Sunday. Exciting times ahead.

There's hype around the new blood, but the old dogs still pack plenty of bite. Tony Hawk returns with hopes of claiming a 4th consecutive master's victory, and the world-renowned icon is surely the favourite heading into this weekend's event. It won't be without resistance from his fellow OG Bones Brigade comrades, though, including the legendary Steve Caballero, who triumphantly returns in 2017 after missing last year's contest. Mike McGill is another of the "big 4" Bones Brigade legends who'll appear at Bondi in 2017, and while Lance Mountain won't be present, the 3 attendees will no doubt be engaged in a friendly rivalry over the weekend. 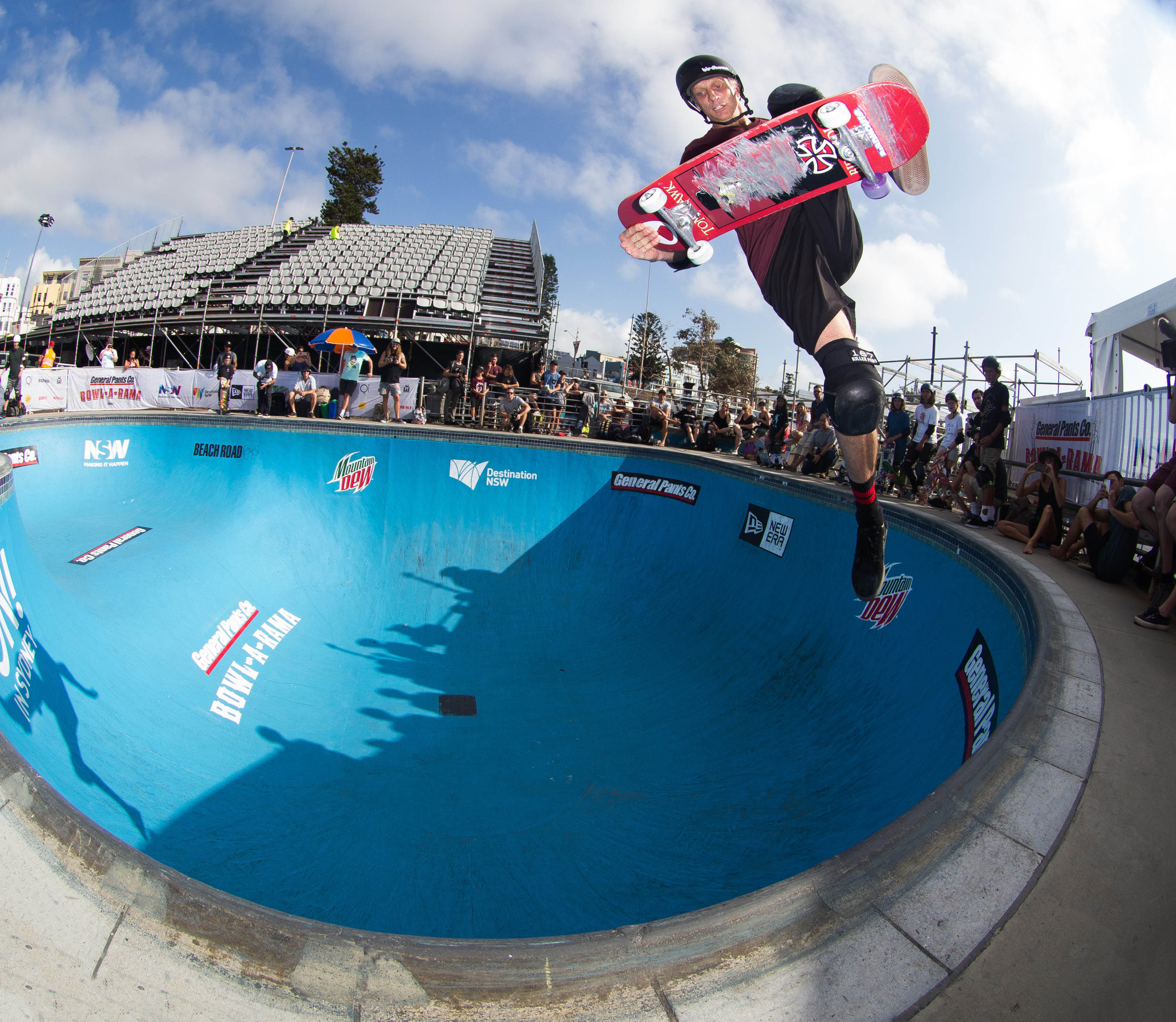 Tony Hawk is aiming for 4 straight wins this Sunday

BOWL-A-RAMA Bondi is the only contest in the world with such a legendary collection of skaters, and this year you can also expect to see the likes of Steve Olson (Alex's dad) and Steve Alba (Jesse's dad) up against Tony (Riley's dad). It's a battle of the skate dads. If that's not enough, Darren Navarette was also a late confirmation, alongside contest staples like Lester Kasai and Pat Ngoho. Legends galore.

The junior event at BOWL-A-RAMA Bondi 2017 will be bigger and better than ever before. There's plenty of exciting young Aussie talent on display, including 11-year-old wonderkid Ethan Copeland, who finished third last year despite his young age. Last year's junior champion was local ripper Ryan Helm, who has been promoted to the pro ranks this year, opening up a great chance for the likes of Newcastle's Jedd McKenzie to pounce on top spot. 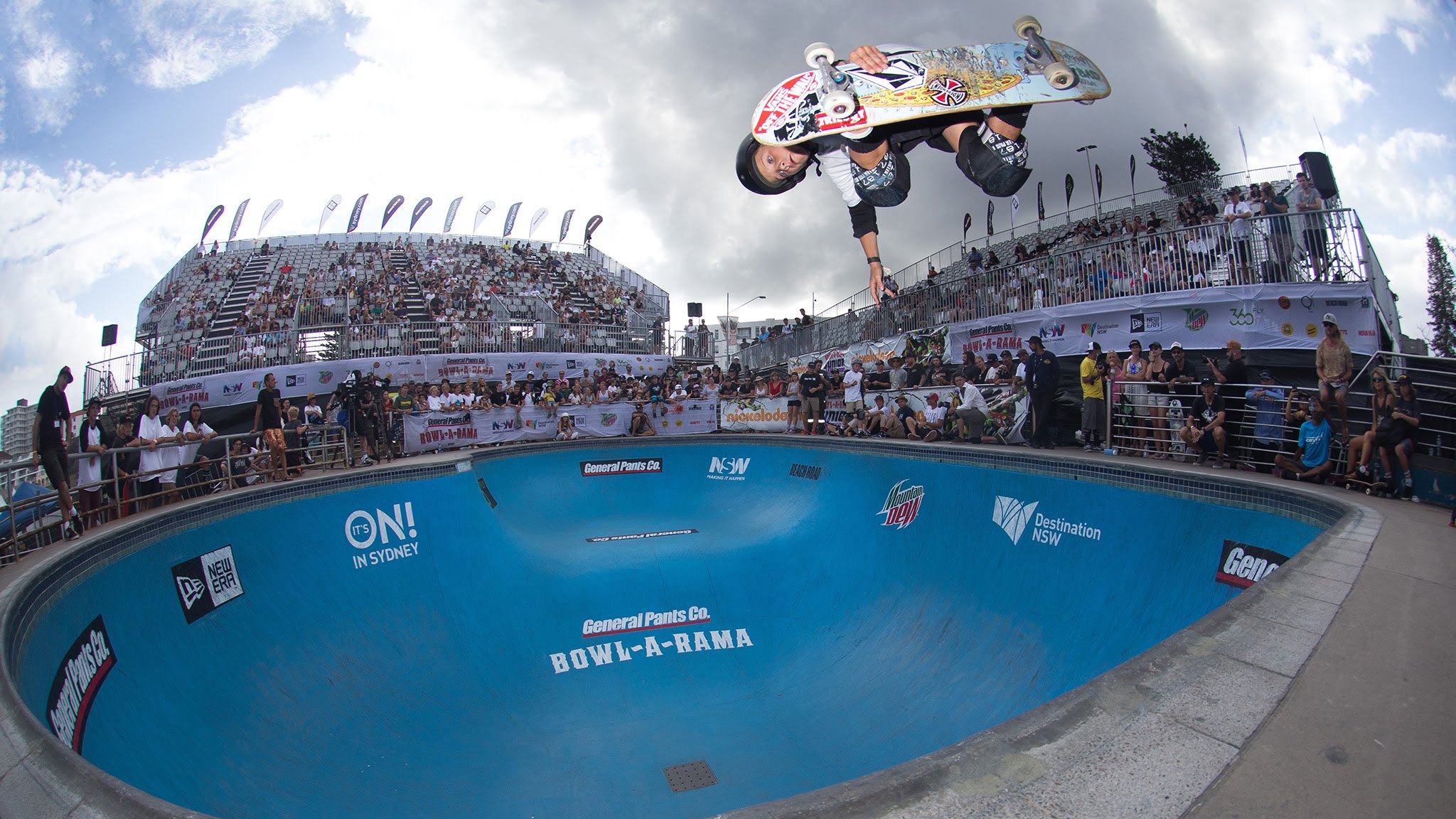 Pint-sized Brazilian shredder Luigi Cini will no doubt hope to rain on the Aussie parade – he recently landed a proper 900, in a halfpipe, at the age of 14 – while a slew of prodigious international juniors will arrive on Bondi's shores for the first time. The dark horse, though, might be Australia's own Keegan Palmer, who has been killing it in the US lately both in the contest circuit and on tour with the big names. The junior division is definitely not a sideshow this year. Expect big things from the little rippers.

Speaking of big things, BOWL-A-RAMA's first ever contested women's division will take place this weekend. It's been a long wait for the girls, and while plans for last year were somewhat scuppered by poor weather, 2017 promises to deliver a women's event to remember. Local girl Poppy Olsen won the world championship in California last year, and with even more experience under her belt, the 16-year-old will look to navigate her home bowl with trademark precision, style and trick selection. 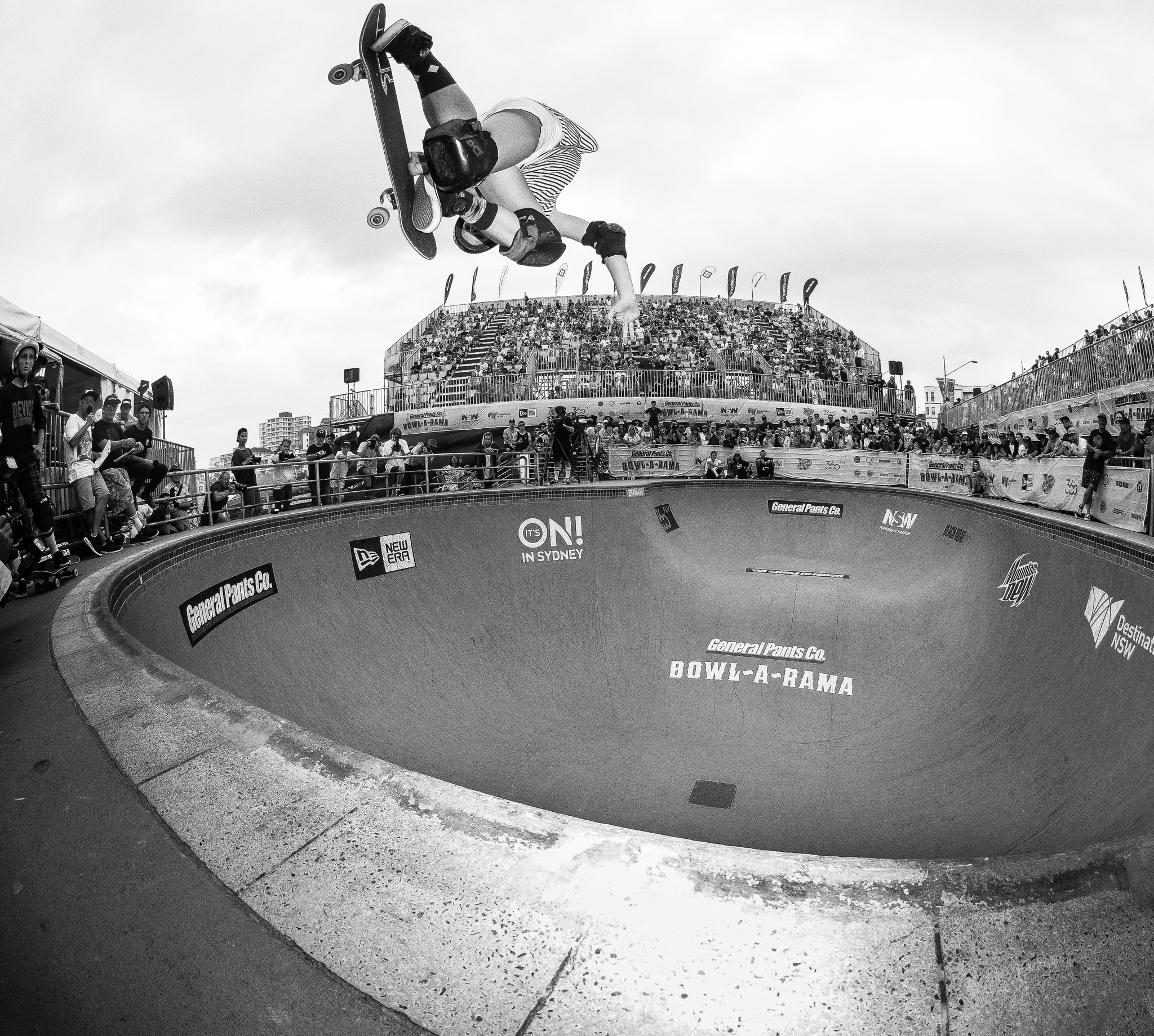 13-year-old American prodigy Brighton Zeuner is one of the brightest women's talents in years, and arrives off the back of victory at the Vans Park Series World Championship in Sweden last August. Brighton, despite her title as world champion, gets the point across that she's "not a pro skateboarder, I just compete in the pro division". She skates well beyond her years and will no doubt be one of the highlights at this year's BOWL-A-RAMA event. A number of international riders will compete this weekend, including the likes of Amelia Brodka, Nicole Hause, Hunter Long and Allysha Le, in what promises to be a spectacle to remember.

Get ready for the biggest BOWL-A-RAMA weekend yet, and stay tuned for full coverage from us here at Boardworld. It's gonna be a banger. 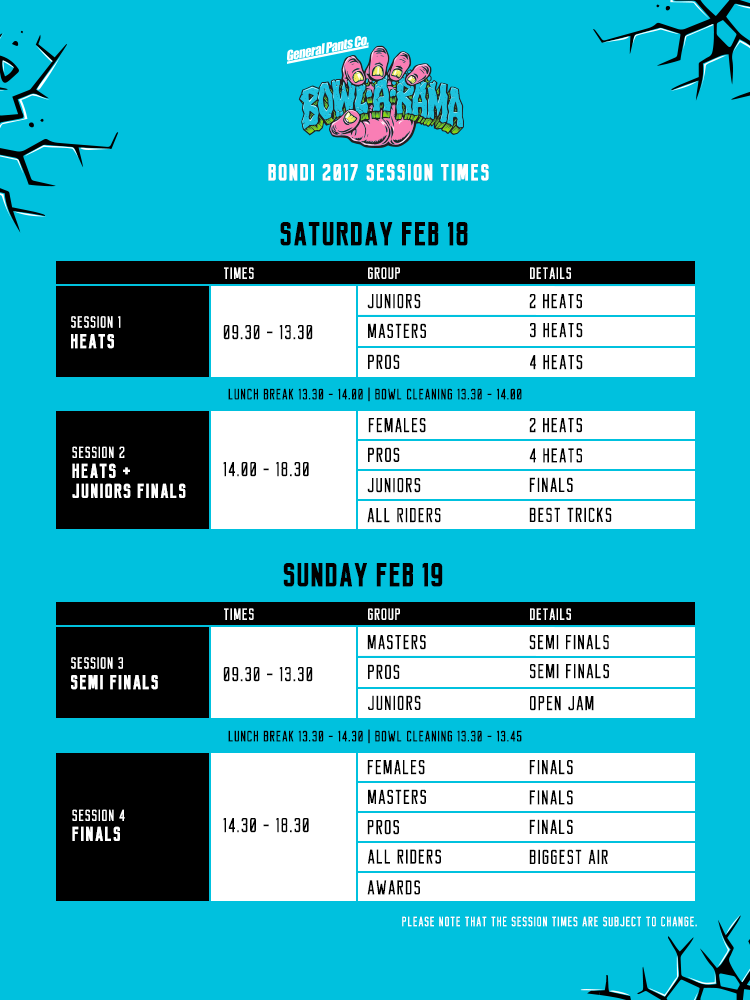