As the Australian summer nears a close, the BOWL-A-RAMA bandwagon rolls into town for another year. The event has become a permanent fixture on the Australian skateboarding calendar, and while most of us probably don’t give a toss about Bucky Lasek or Alex Sorgente for most of the year, it’s fair to say that even the most avid “core” skateboarder feels a little excited when they see the unbelievable level of skill on display at Bondi. This year brought with it more chaos than ever, and some of the gnarliest runs and heaviest slams in the contest’s 11-year history went down over the weekend. It’s safe to say that this was the best Vans BOWL-A-RAMA Bondi I’ve ever witnessed, for a number of reasons. 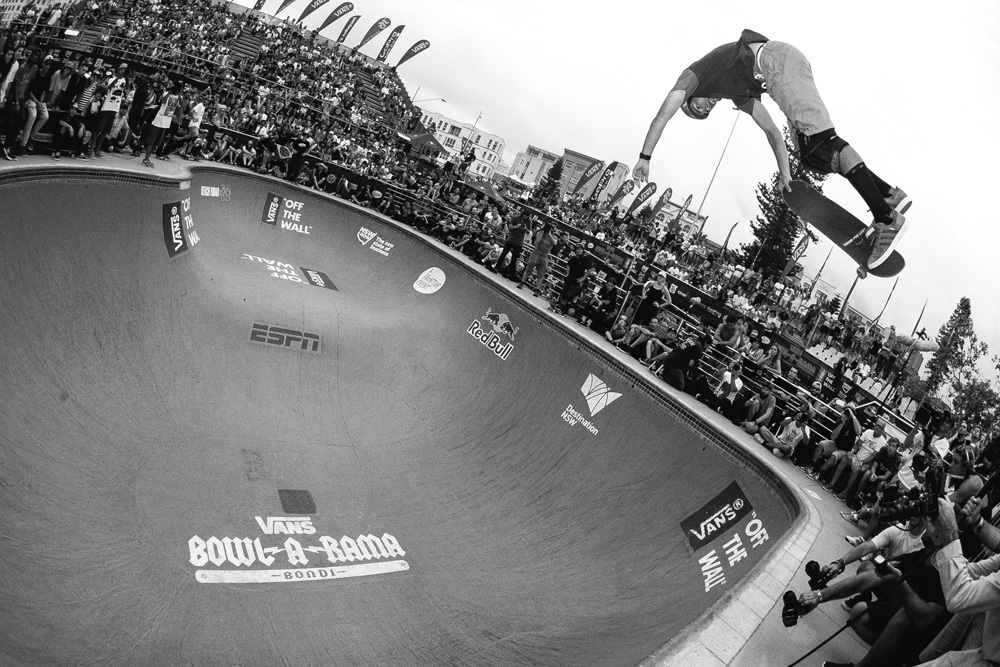 Alex Sorgente threw down the most creative airs, including this one-handed rocket variation 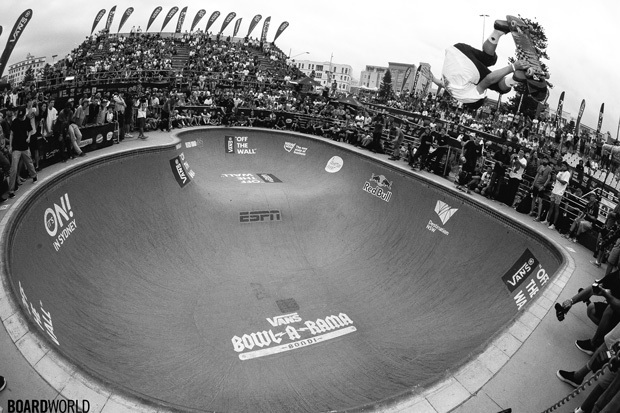 Cory Juneau has come along in leaps and bounds. Huge McTwist.

The first thing that stood out at this year’s event was that the level of skateboarding is at an all-time high. Kids like Cory Juneau, Alex Sorgente and Chris Russell have been competing here for several years, but they took it to an entirely new level this time around. Juneau has gone from a 13-year-old newcomer, who was applauded mostly due to his young age, to a genuine title contender within the space of a few years. Sorgente showed us what he was capable of last year, but he turned it up to eleven for the 2015 event, where he threw down several of the biggest rocket airs I’ve ever seen—period. His trick set has evolved since 2014, and he especially showed it with a number of unique grinds and technical air tricks, rather than just blasting the biggest 540s he could muster. It’s rad to see these kids step it up at such a breakneck rate, and it’s evident that they’re only getting better still. 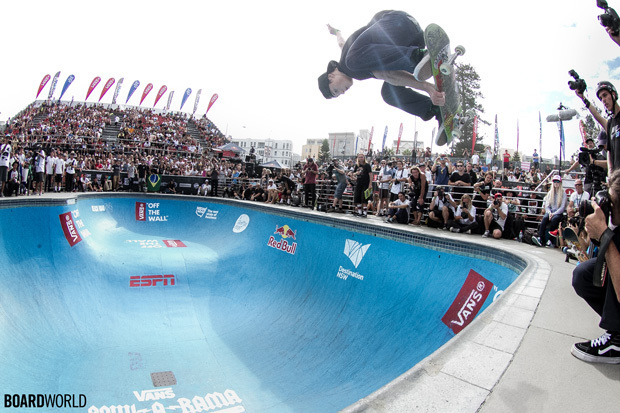 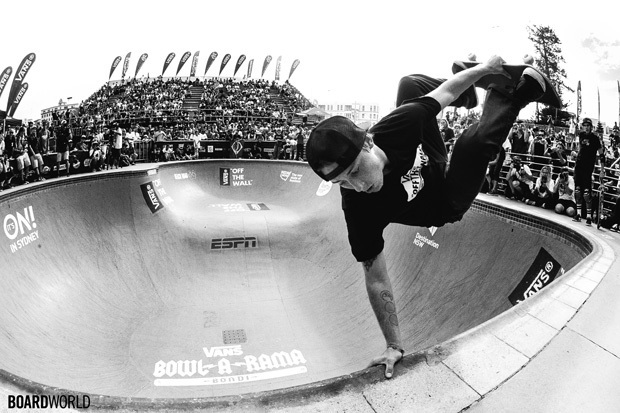 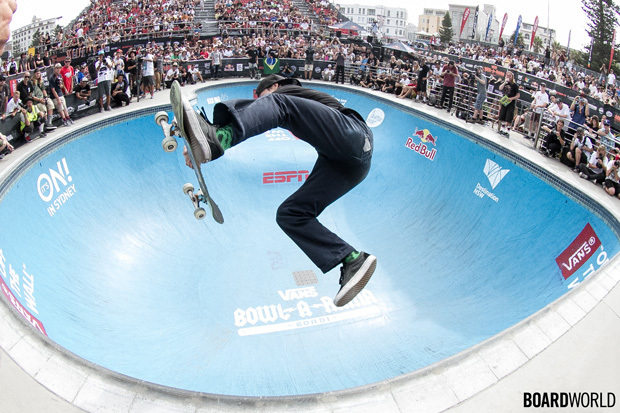 Chris Russell blew everyone away with his padless pool-skating prowess

Chris Russell proved to be a fan favourite when he dropped into the bowl last year, but nothing could prepare anyone for the padless slaughter we’d bear witness to this time around. The guy is an animal, and anyone who doubts BOWL-A-RAMA is a genuine pool contest must have been eating their words. He was the fastest on the course, strung together the most creative runs, nailed some of the gnarliest airs of the day (a huge boneless 360 in the deep end—ridiculous) and did it all with that burley, “all or nothing” style that makes pool skating so enjoyable to watch. Unfortunately he knocked himself out on his first run in the finals, and we didn't see him again. The padless trio of Russell, Kevin Kowalski and Ben Hatchell was definitely a refreshing change, and all of them ripped the bowl to pieces — Hatchell winning the best trick contest with a grabless (and padless) 540 over the hip. 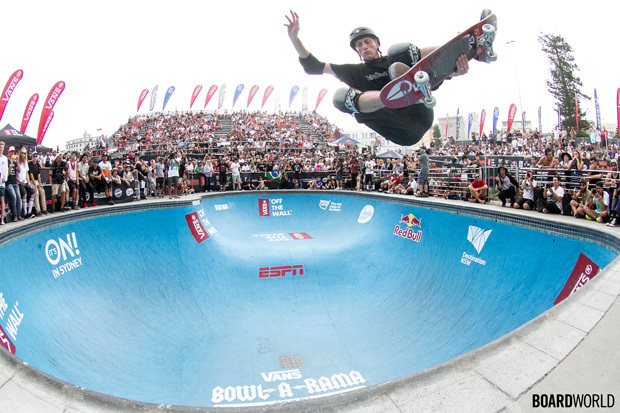 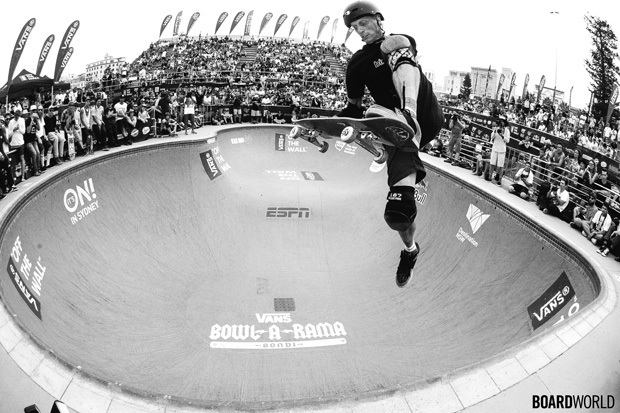 Tony Hawk threw down his signature airs — seen here with a stalefish and madonna, respectively. 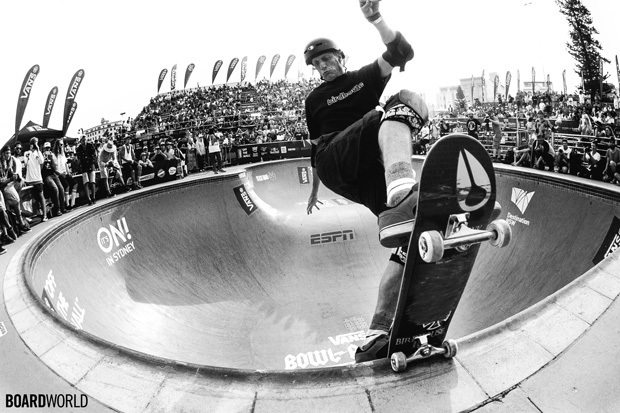 It's the second time Tony has nailed a front blunt in front of me, and both times I've chopped his hand off. Can't win 'em all.

Something else that set this year apart from previous editions was the competitive nature of the masters division. Previous years mostly consisted of several well-respected legends in an invert and frontside grind contest, until Tony Hawk came along and tore them all to shreds in 2014. This year we saw the return of Chris Miller, who was neck-and-neck with Tony throughout the finals, which also brought out the best in the likes of Nicky Guerrero and Kevin Staab, who had much improved performances. It was a proper contest this time around, and while Tony pipped them with his skillful 540s and technical coping moves, he was pushed a lot further than previously.  This was definitely a highlight, as the masters event had become somewhat stale in years gone by. +1 for 2015. 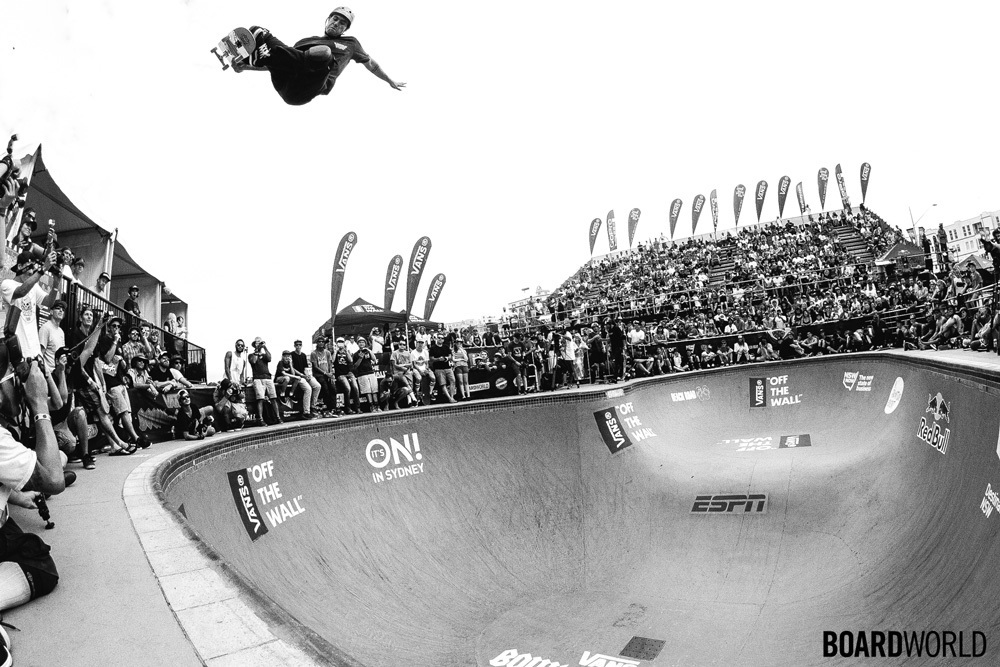 Pedro went bigger than ever, but it was a case of the same old tricks and a lack of consistency that cost him. 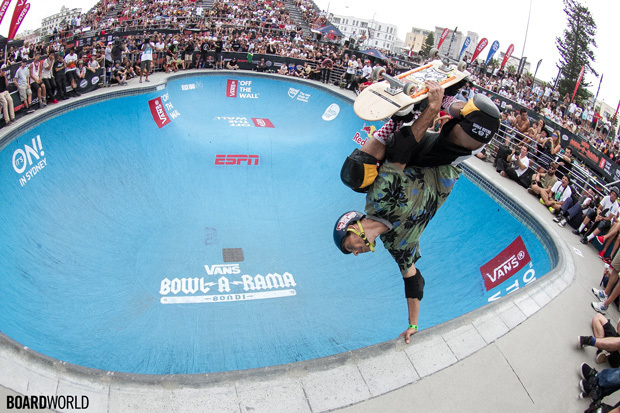 Nicky Guerrero was unlucky not to make the masters podium. Unique inverts for days. 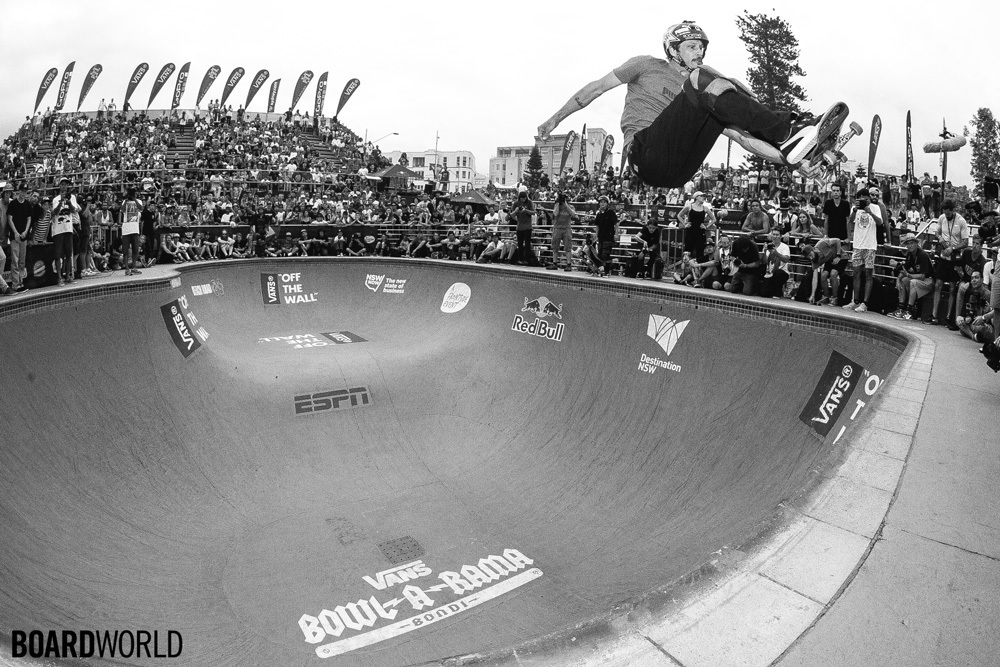 Bucky owned the day, and his switch stalefish was one of the highlights. No one else goes switch.

The biggest shock of Vans BOWL-A-RAMA Bondi 2015 was the fact that 5-time winner Pedro Barros, who has never finished lower than first place, didn’t win. Instead, the judges handed the title to the more creative Bucky Lasek, who nailed some unbelievable invert variations (including his renowned McEggplant), was the only skater to string together several switch tricks in a run, and skated the entire bowl with some super creative lines. It was awesome to see Bucky, who has toiled away behind Pedro since he last won in 2009, finally reclaim the title (at the age of 42, no less). Pedro bailed on three of his four runs in the final, but it was still enough for him to take second place. Unfortunately he didn’t show us anything new, and pretty much repeated his runs from the last two years, which (although exciting) probably didn't sit too well with the judges. Bringing home third place was Alex Sorgente. 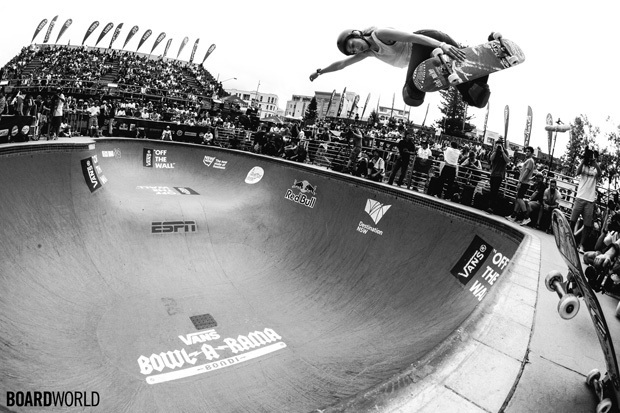 The final reason this was the best BOWL-A-RAMA I’ve been a part of, and perhaps the most exciting reason, was the way that Lizzie Armanto skated in the event. Lizzie is still the only female rider to ever take part in a male pro event, and is leading the way for a generation of upcoming female talent. She was in the top 15 for most of the event, and rightly so — with by far the biggest airs, longest grinds and most creative lines we’ve ever seen from her. It’s genuinely awesome to see this level of skating from Liz, who is well-and-truly proving that skateboarding holds no barriers. I can’t wait to see what she comes up with next time around. 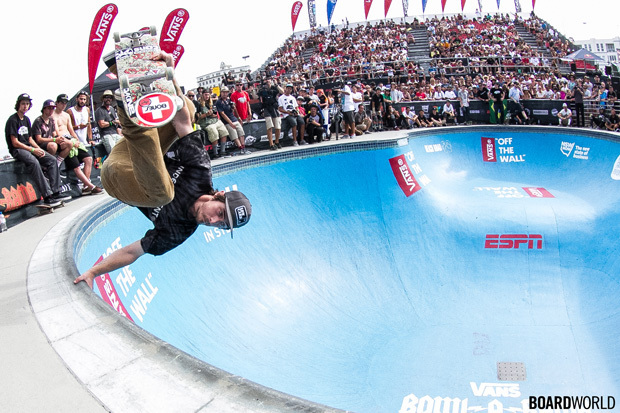 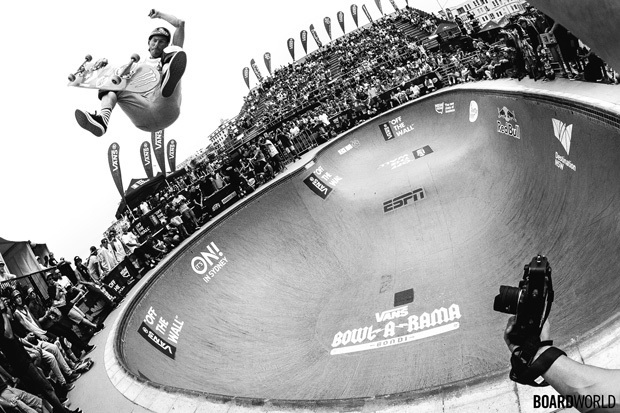 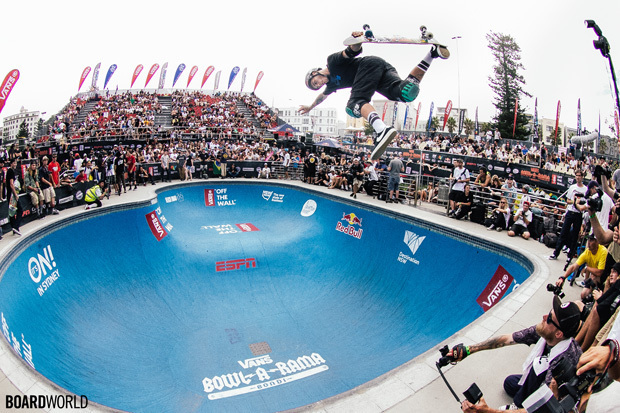 Cheers to the best BOWL-A-RAMA of all time.