10 Skaters Who First Appeared in 411VM

From Bam Margera to Chris Cole

Long before the days of internet videos and camera phones, skateboarding had a thing called the "video magazine". 411VM was the first and by far largest of these ancient relics, developed by Josh Friedberg and Steve Douglas in the early 90s, and it ran for 74 action-stacked issues between 1993 and 2006. For those unaware, 411VM was a bi-monthly VHS (and later DVD) which featured video parts from pros and rookies, "day in the life" segments, contest footage, tour videos, pro setup walkthroughs, classic video ads, and much more. And back then, it was pretty much the only way you'd ever see videos of this nature – especially in the early days of the 90s.

While every issue was packed with amazing content, the video magazine prided itself on shining the spotlight towards younger, unknown skateboarders who were killing it around the world. The "Wheels of Fortune" segment focused on lesser-known shredders in particular, in the days when getting noticed was nearly impossible for most skaters – you couldn't just put your footage up on YouTube for the world to see. The following 10 skaters got their first big break through 411VM, and as an internationally distributed video, that was a pretty big deal. As you'll notice, there's some giant names in here. In chronological order, we have... 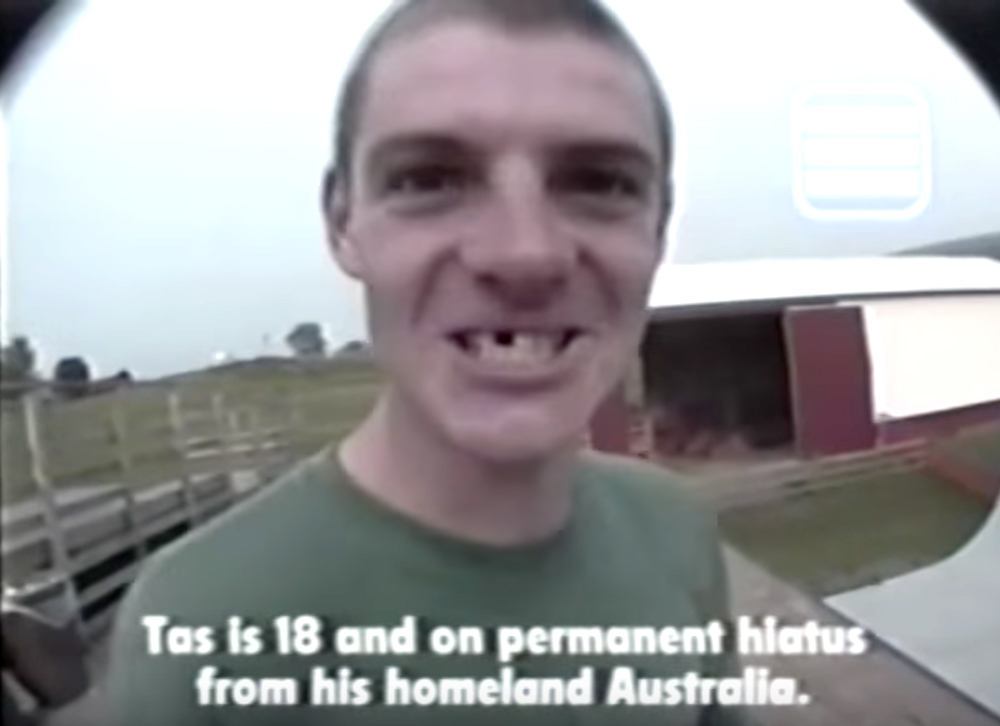 Three years before he knocked Tony Hawk off his perch atop the vert skateboarding world, an 18-year-old Tas Pappas featured in the second ever issue of 411VM. The Australian vert prodigy is described as being on "permanent hiatus" from his homeland, before unleashing around a minute of footage, filmed mostly at a backyard ramp somewhere in the US.

Tas went on to win the World Vert Championships in 1996, defeating red-hot favourite Tony Hawk to claim his place as world number 1. A serious back injury almost immediately brought Tas back down to Earth, though, and was the catalyst for his eventual spiral into drugs and prison. He's since been released from jail and is back skating, while his life story was recently the subject of a documentary, All This Mayhem. Regardless, Tas definitely goes down as an Australian skateboarding great.

411's second issue also threw the spotlight on Tom Penny, a relatively unknown teenage ripper from Dorset, England. The 15-year-old lists his favourite skaters as Gonz, Eric Koston, Daewon, Rune Glifberg, Guy Mariano and Jason Lee – and little did we know he'd soon be on the same level as those greats. Penny's Wheels of Fortune section features around a minute of footage from Radlands in Northampton, England's first indoor skatepark.

Penny went on to star in a number of skateboarding's biggest videos, establishing himself as one of the best street skaters of all time. His timeless style is still regarded as the best by many, and his parts in videos like Menikmati (2000) and Sorry (2002) are considered some of the best ever filmed. It's safe to say that whoever gave Penny the chance to appear in 411 made the right call.

There's no doubt about it – Bam Margera was a prodigiously talented skateboarder. In 1994 he was a 14-year-old nobody from West Chester, PA, known for annoying the older guys at Love Park and throwing down unbelievable tricks at a level well beyond his years. And while he was filming for Dan Wolfe's Eastern Exposure videos at the time, his 411VM profile was the first time most had ever seen or heard of Bam.

By 1998, Margera was a part of the then-recently overhauled Toy Machine team, and would soon play a major part in developing the wildly popular CKY videos, and later Jackass and Viva La Bam. By the mid-2000s Bam was selling more boards than Tony Hawk, was worth several million dollars, and was one of the most recognisable celebrities on the planet. And it all started with 411VM.

Another of Love Park's local talents was Josh Kalis, and the 18-year-old also found himself with the opportunity to feature in 411VM in late 1994. Kalis shows off his soon-to-be-trademark consistency with a string of tech lines throughout his short-but-sweet Wheels of Fortune segment, which also features an iconic Kalis 360 flip for good measure.

Kalis fully established himself with a memorable section in Alien Workshop's Timecode video two years later, and went on to become one of the most legendary street skaters of all time and a staple of Love Park's golden era. His parts in Photosynthesis (2000) and The DC Video (2003) are still regarded as two of the best in the history of skateboarding.

Yep, issue 9 was a heavy hitter. It's fitting that Kalis' partner-in-crime, Stevie Williams, also broke onto the scene with a Wheels of Fortune part in the very same issue. While Stevie appeared in the first Element video around the same time, it was 411VM which gave him the proper spotlight for the first time, showcasing his ultra-tech moves on the streets of Philadelphia to a worldwide audience.

Like Kalis, Stevie was a core member of the DC Shoes empire of the early 2000s, and went on to create DGK in 2003. Williams is also a founding member of Gold Wheels and Asphalt Yacht Club, owns several retail stores across the US, has designed sneakers for Reebok, Nike, Supra and DC, and is considered one of the most influential street skateboarders of all time.

Rowley made an appearance in Jeremy Klein's Hook-Ups video of 1994, but it wasn't until his Rookies part in 411VM a few months later that we got a proper look at the 19-year-old lad from Liverpool. Rowley's talent was obvious at this point, and he was already riding for Flip Skateboards – who had just transformed from Deathbox Skateboards – and was living in Huntington Beach with Ian Deacon and Jeremy Fox.

Rowley's contribution to skateboarding since then goes without saying, and Flip, which he co-owned, went on to become one of the biggest companies in the history of the sport. His gnarly approach to skating earned him a place as one of skateboarding's most popular characters, and his appearance in the Tony Hawk's Pro Skater games only furthered that popularity. There's no doubt about it – Geoff Rowley is a skateboarding legend.

One of the sickest Wheels of Fortune sections on this list is undoubtedly Jerry Hsu's from 1997. It's hard to believe Jerry was only 15 when this was released – his style is almost the same as today, and his trademark nollie hardflips and switch frontside flips were already on full display. Not to mention the humorous skit with Louie Barletta teaching Jerry's class (and Marc Johnson landing himself detention by the end), a prelude to the Enjoi days.

Now 35, Jerry is still at the top of his game – his 2016 part in MADE: Chapter 2 showed just how incredible he still is, and he's arguably the most active skater on this list as of right now. His recent shoe has been selling like crazy, showing that his popularity is still sky high. And with performances like Bag of Suck (2006) and Stay Gold (2010), it's easy to see why this once unknown kid cracked the big time.

They wouldn't become Enjoi teammates for another 10 years, but Cairo Foster and Jerry Hsu both had Wheel of Fortune debuts in issue 20 of 411VM. Cairo was already 20 years old at this point, which practically puts him in "late bloomer" territory, but after watching him crush the streets of San Francisco for 90 seconds it was obvious that he was the real deal.

Being the real deal landed him a deal with Real, dropping a classic part in Real to Reel (2001), which at least one pundit described as being "pretty real". Cairo moved to Enjoi via Popwar, threw down a bangin' part in Fully Flared, and was dropping high-quality footage as recently as 2014 in Enjoi's Oververt video, despite now being in his 40s.

Another future legend to break out in 1997 was none other than AVE, an 18-year-old San Diegan with style for miles. This kid immediately turned heads with his nollie frontside 180 variations, ability to skate schoolyard benches like a seasoned vet, and a highly memorable switch frontside crook game. Not much has changed.

AVE cemented himself as one of the world's best, and most popular, street skaters with parts in Photosynthesis (2000), The DC Video (2003) and Mind Field (2009), among plenty more. Despite fading away from the scene for a while, Van Engelen delivered arguably his finest video part yet in Vans' Propeller, which ultimately earned him Thrasher's SOTY title for 2015. Not bad.

The final member of our list undoubtedly went on to achieve great things, but in the year 2000 he was just a kid from Philly with a 411 Wheels part. Mind you, it was a pretty good one – a super baggy Chris Cole handled Philadelphia's spots with style and finesse, including some unforgettable Love Park footage and a bigspin front blunt ender that could knock the XXL shirt off your back.

In 2002, Cole released a groundbreaking part in Zero's Dying to Live, and the rest is history. As the heart and soul of the new Zero generation, he went on to change the game in New Blood (2005), subsequently claiming Thrasher's SOTY that year with his tech-gnar wizardry. He did it all again in 2009 following Fallen's Ride the Sky – possibly his best ever part – becoming only the second person to win two SOTY awards in the process. Truly an all-time great.

Words: Riely Walker
Stalk us on Facebook for more

Thrasher is Being Seriously Ripped Off

This is getting stupid

The Best Skaters Over 40