Thrasher is Being Seriously Ripped Off

This is getting stupid

They say imitation is the greatest form of flattery, but try selling that idea to the crew at Thrasher Magazine.

Whoever came up with that oft-quoted saying was definitely the shady imitator, rather than the creator. With Thrasher's great popularity has come hordes of not-so-great apparel knockoffs, and things are quickly approaching boiling point. Lawsuits are being hypothetically thrown around, cease-and-desist letters delivered, and brand after brand is being called out by the skate giant at an alarming rate. And sadly, it seems Thrasher is losing the battle.

The latest company to blatantly rip off Thrasher's flame hoodie graphic is the luxury apparel designer R13 Denim, known for selling denim jackets and jeans for over $1000 a piece, and whom Thrasher recently drew attention to through Instagram with a kind message to "fuck off". Fear not, though, as their oversized atrocity of a Thrasher-style hoodie costs a mere $390 AUD. Bargain. Take a look at the image and see if you can spot any similarities with the Thrasher version...

Perhaps the most surprising, and alarming, fact of the matter is that these aren't small market-type knock-offs. The imitation game is being played by giant multinational corporations, the kinds with gigantic teams of lawyers, who greatly dwarf even Thrasher in size, wealth, and worldwide popularity.

Forever 21, the massive American apparel chain which raked in a casual $5.8 billion revenue last year, are known for pushing copyright laws to the absolute limit – and generally getting away with it. They recently took Thrasher's flame font, rebranded it to say "Happiness", slapped it on the back of a windbreaker jacket, and began selling it in stores. Not only that, but they apparently actively targeted followers of Thrasher with sponsored Instagram ads featuring "their" product, in an effort to capitalise on skate culture. Thrasher made their stance pretty clear in calling out Forever 21 recently.

Just got a letter back from @hm's lawyers. Here's an excerpt from their response. FUCK OFF H&M ���� Respect the original ��

By the time H&M decided to follow the rip-off craze a few weeks back, Thrasher had seemingly had enough. The magazine posted H&M's response to a cease and desist letter, where the retail giant asserted that its "Trippin" flame tee featured "merely an ornamental or decorative" font, and claimed that nobody could possibly confuse its blatant rip-off with a nearly identical Thrasher t-shirt. Sadly, a company as big as H&M – with annual revenue close to $30 billion – probably has lawyers who know exactly how to win these cases. They aren't going to risk everything just to copy a Thrasher tee.

So what exactly can Thrasher do about the copycats?

Thrasher has been using the flame font and logo in question since 2002, when it first appeared on the cover of that year's photo issue, alongside a glorious Josh Harmony nosegrind (pictured below). Strangely, they only filed a trademark application for the flame logo on February 1 of this year, which surely opens things up for dispute – although it's possible Thrasher holds common law rights to the logo. As for how that holds up in court is anyone's guess, and we're hardly legal experts on the matter, but these are the facts. With that being said, a resolution seems some way off. 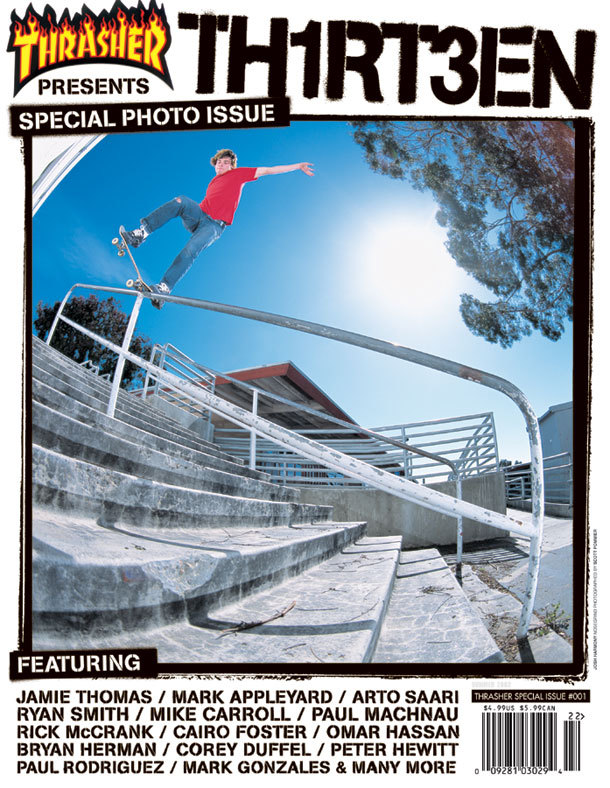 We can't help but feel this is only the beginning of a long battle for the skateboard magazine, and one with all odds stacked against them. We'll keep you updated. In the meantime, consider supporting the real thing.

One of the gnarliest tricks ever done on a skateboard