We're about to enter the final month of 2015. Can you believe that? As the year winds to a close, SOTY season begins kicking in. Thrasher has named its 25 contenders for 2015, and we've widdled it down to the 9 skaters who we think have a decent shot at the prize. We'll go over their achievements in 2015, from magazine interviews to montage cameos, and you can make your mind up from there. In alphabetical order, these are our contenders. Let us know what you think. 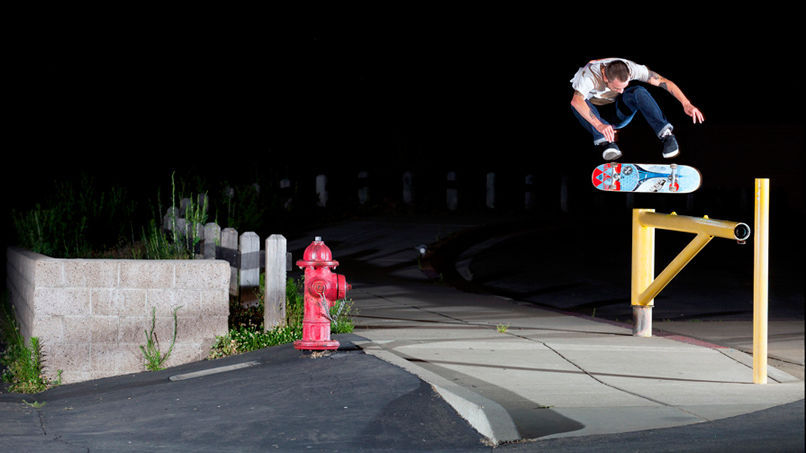 The once clean-cut Virginian has transformed into a trend-setting, free-flowing, borderline insane individual, and we love it. Vans' Propeller video wasn't only the most anticipated video of 2015, but probably the most hyped of the decade, and Gilbert delivered a two-song part to remember. Many would claim it was the best part of 2015, and he could be forgiven for resting on that for a while, but Gilbert wasn't done. In October he dropped his Salt Life part, another part full of raw street skateboarding, monster pop, and an untouchable switch game. The 4-minute barrage of raw files from Propeller added to a stellar year for Gil.

His Vice and Caught in the Crossfire web interviews weren't short on killer content, while he landed print interviews in both Solo Mag and Thrasher in the earlier stages of the year, and also claimed Transworld's Pro Spotlight feature in their June issue. All of this was on top of launching his own brand, Quasi Skateboards. You're crazy if you don't think Gilbert is one of the favourites for this year's SOTY crown.

Every single year we expect Jaws to slow down a little, but Arizona's number 1 stuntman has continued his trend of annihilation in 2015. He kicked the year off with his first ever Dekline pro model shoe, hot on the heels of his curtains part in their True Blue video in late 2014. A 10-minute montage of bone-jarring hammers soon followed in True Blue Retrospect, but not before he released a full rooftop part in classic Jaws style. He dropped more footage in Bronson's Maximum Impact clip, as well as Asphalt Yacht Club's tour videos from Costa Rica and Hawaii. To cap off a brilliant year, he featured in the documentary-style Push series, and then let loose in Paradise Valley Skatepark for his knee-crunching In Transition video part. It's been a heavy year for Jaws.

Nyjah didn't have much success on the competition circuit this year, but that barely comes into the equation when considering his SOTY status. In saying that, it was a slower year for Nyjah, who made more headlines for his bad behaviour, out-of-control parties and sponsorship changes than his video parts. The fact he's still being talked about as a potential candidate is a testament to his prowess on a board. He featured in a number of Asphalt Yacht Club tour videos in 2015, which landed him a number of photos in Thrasher's resulting tour articles, including perhaps one of the biggest backside 5-0s of all time. That trick, and many more, featured in his OMFG part which dropped just a few weeks ago. Nyjah stepped it up for his one major part released in 2015, and it featured a number of NBD rail tricks that cemented his place as a freakish talent.

He also made a couple of spectacular cameos in Brain Farm's We Are Blood film, and managed to land interviews in mainstream publications like Interview Magazine and Rolling Stone, although they'll surely have no impact on his SOTY status. He also still managed to take home first place at Street League Barcelona and the Kimberley Diamond Cup, so it wasn't all bad on the contest front. 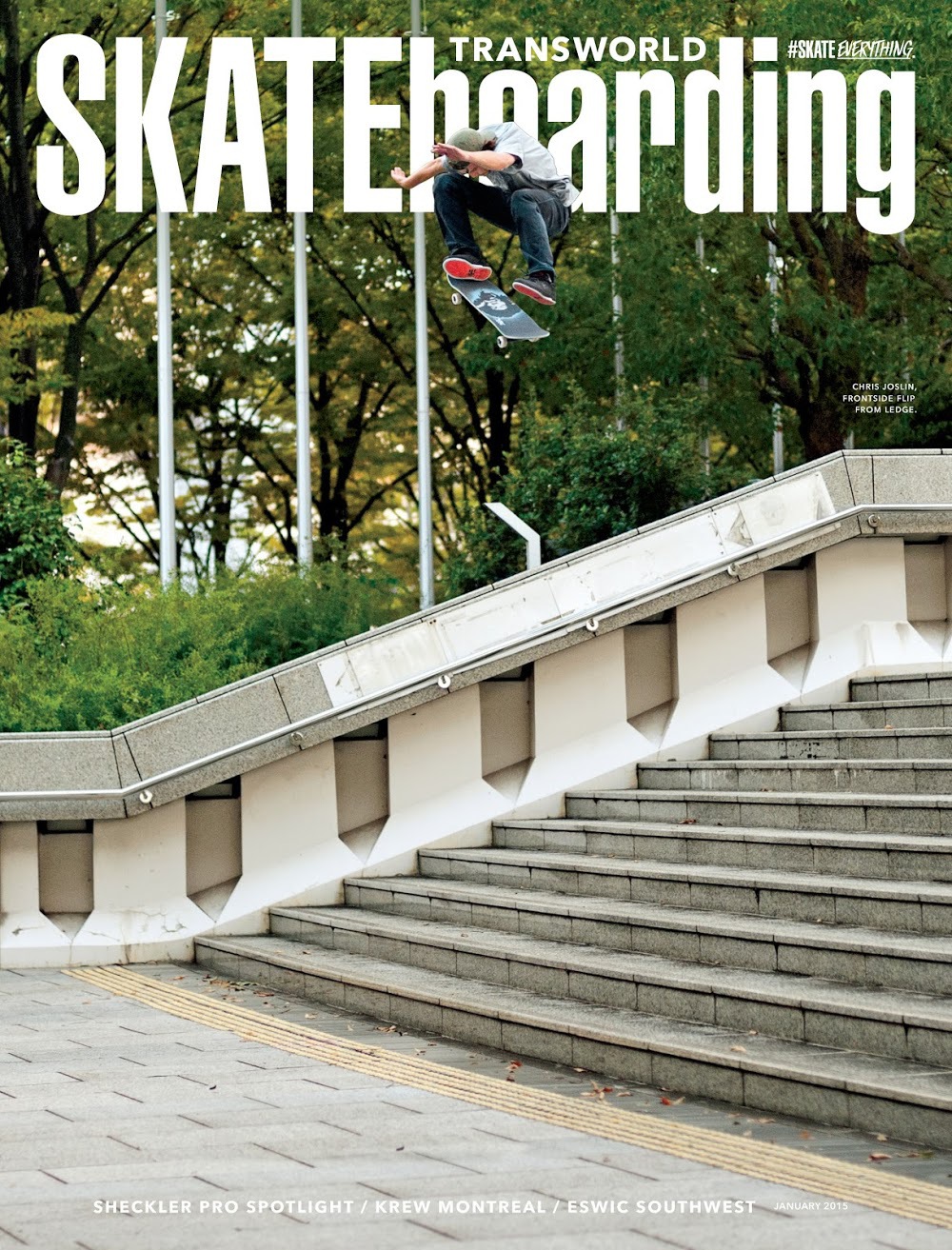 2014 was the year Chris Joslin shot to superstardom, but 2015 was the year he maintained it. He came out swinging this year, kicking things off with Transworld's January cover, a monstrous frontside flip in Spain, which you can see above. He then backed up his 2014 Year's Best Am award with another full part for The Skateboard Mag, before he was welcomed to Venture Trucks with even more incredible footage. He kept things chill throughout the mid-year, until his part in No Hope was released to the masses, accompanied by 10-minutes of behind-the-scenes insanity.

A solid dose of footage in Etnies' Strobe Lights and Motorbikes video continued Joslin's run in 2015, and in August it was announced that he'd officially turned pro for Plan B, having just become the first am to film a Battle Commander at The Berrics. The cap off 2015, Joslin filmed an entire full part on a 12-day trip to China, and elevated his status in the skateboarding world once again. If not this year, you can bet your bottom dollar Joslin will win SOTY at some point in the future. 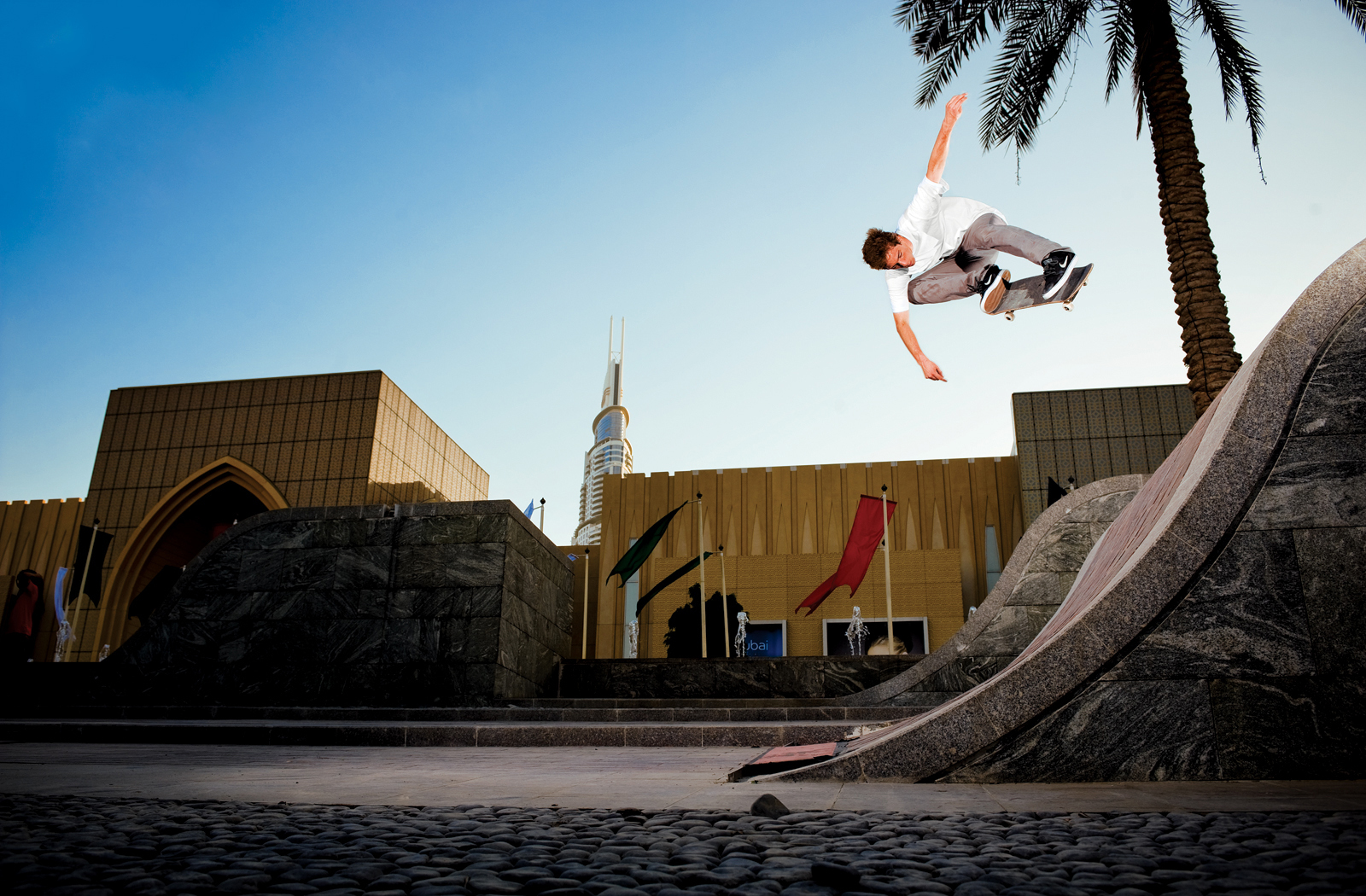 Cory Kennedy might be considered the "odd one out" in this list, partly because he hasn't dropped a major full part this year. And while that's about to change when SB Chronicles 3 is released just days from now, he's still put out a decent stream of footage and photos to justify his spot on the list regardless. His Bellingham part for Sk8Rats might not have been a major event, but it was still one of the year's best parts in the eyes of many. A stack of footage in the Bru-Ray series was followed by the release of his own signature shoe for Nike, which is a pretty big deal no matter which way you twist it. He featured with a full interview in Grey Skate Mag's October issue, with photos littered throughout Thrasher and Transworld all year. When his Nike part drops in just a few days, Cory will be the name on everyone's lips.

There's no doubt about it — Luan has had an amazing year in 2015, and is one of the hot favourites to take out SOTY. On the contest circuit he won the Tampa Pro, broke Nyjah's streak in claiming three Street League wins, and ended up on the podium for every contest he entered. In the streets, he kicked off the year with a full part from his hometown of Brasilia, where he dodged stray dogs and crumbling streets on his way to a stack of brilliant footage.

Luan kept himself relevant throughout the year with constant Instagram clips and magazine coverage, before letting loose once again towards the end of 2015. His fan-favourite Push part was quickly followed by more unseen footage from Nike SB, before he once again took to the streets of Brazil to film Mic Check, a surprise full part to cap off a monumental year. Luan's unmistakable style puts him in a league of his own, and like Joslin, it's only a matter of time before he becomes SOTY. This might be the year.

Shane O'Neill has been a perennial contender for SOTY over the last few years, and he's definitely cemented himself as one of skateboarding's elite. And while we wait patiently for his full part from Primitive, due to drop within 24 hours of this being written, it's safe to say Shane has already been one of the best this year. His current Thrasher cover features a switch kickflip back noseblunt down a handrail, which is certainly in contention for trick of the year, while he's been constantly sighted on the pages of Thrasher throughout 2015. 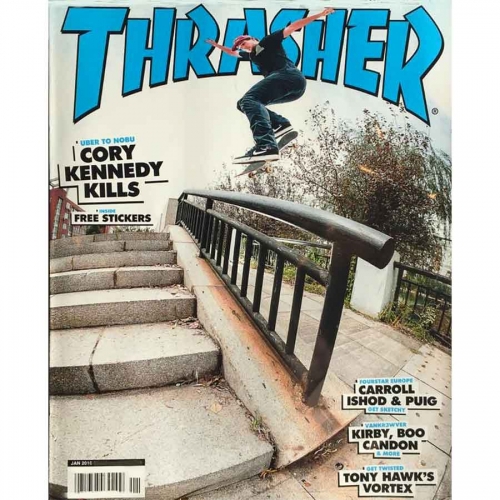 The main highlight of Shane's year, though, is most definitely his Shane Goes part, which you can view above. We'd consider it to probably be the most technically groundbreaking part of 2015, and he backed it up flawlessly with his unseen Nike footage a couple of months later. To finish the year, Shane announced that he'd left Skate Mental and was now a co-owner of Primitive Skateboards, and he was welcomed with a mind-blowing NBD down the Santa Monica triple set. This could be Shane's year.

Not many could have predicted than AVE would be a genuine SOTY contender in 2015, but I think we speak for everyone when we say it would be a welcome achievement. His part in Propeller scored him the video ender, and it was arguably his best effort since The DC Video way back in 2003 (his switch flip front crook on a picnic table would win him SOTY alone in the opinion of many). His raw files from the video were almost as popular as the part itself, and AVE was suddenly popular with a new generation of skateboarders. 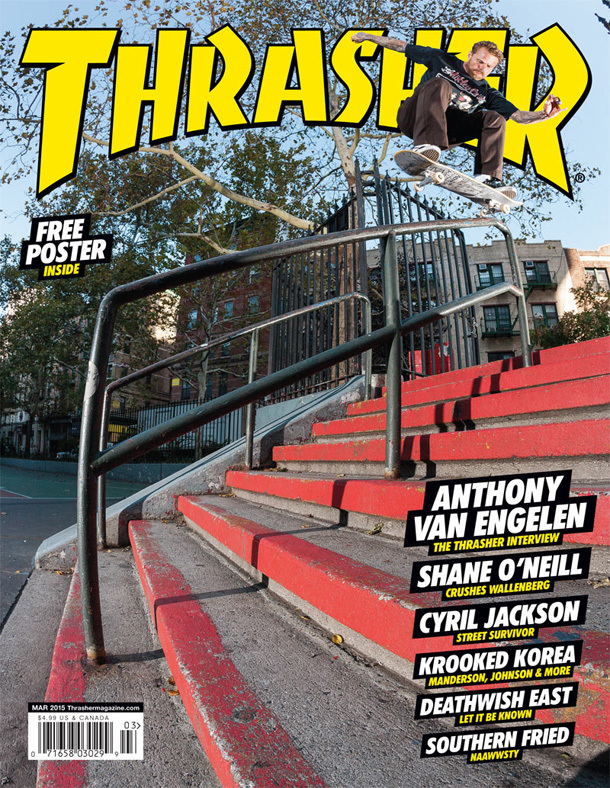 He graced the cover of Thrasher's March 2015 issue with a switch ollie-over 5-0 in New York's Chinatown, and he also had a full interview within. With over three minutes of footage in the recent Boys of Summer video, AVE finished off his most productive year since the Mind Field days, and probably has the vote of everyone over the age of 25 to claim his long-deserved SOTY award in 2015.

We've said it before and we'll say it again — Ishod Wair is the most naturally gifted skater in the world. He makes everything look way too easy, but not only that, he actually does everything with ease. It's no surprise that the 2013 SOTY is back in the mix for 2015, as he was in 2014, and probably will be for many years into the future. Ishod's Sabotage 4 part got things rolling in 2015, where he handled his home streets of Philadelphia like the pro that he is. That was shortly followed by his third career Thrasher cover, another Thrasher interview, a Chrome Ball interview, a stack of footage in Real's Through and Through video, a full Push part, and more photo coverage than you can poke a skateboard at. There's not much else to say -- Ishod nailed it in 2015. 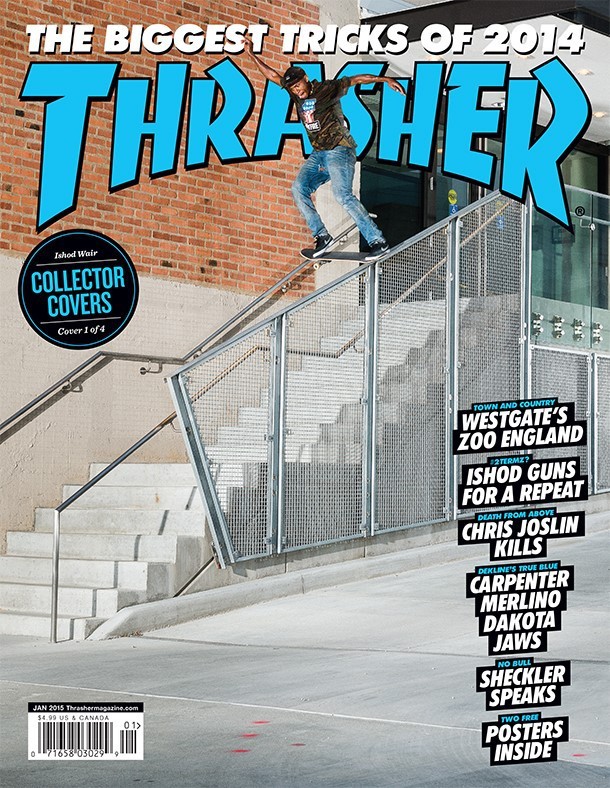 Ishod's Thrasher cover in January of 2015

This SOTY race is going to have one hell of a finish.

New Zealand's Skater of the Year