Skateboarding's worst kept secret was all but confirmed today when the below image surfaced showing Nyjah Huston dressed in Nike footwear and apparel. Whether you're behind the idea or not, you can't really fault a 20-year-old for accepting a multi-million-dollar pay rise to ride his skateboard — and that's before we factor in potential royalties from a pro model shoe. 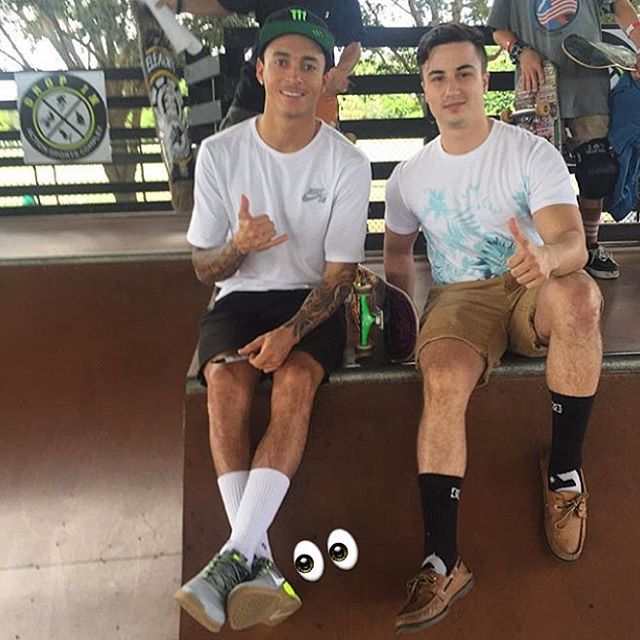 Nyjah sporting Nike kicks and a Nike tee. Courtesy of @rippedlaces on Instagram.

Nyjah's move to Nike marks a new beginning in his esteemed career. 2015 also marks 10 years since Nyjah first burst onto the scene in Element's Elementality Volume 1 video, which was literally half of his lifetime ago, so we thought it would be a good chance to look back on Nyjah's best video parts from the last 10 years. Love him or not, he's definitely thrown down some groundbreaking video sections. Let's dive in.

We kick things off with the one that started it all. This part introduced us to a 10-year-old kid with ass-length dreadlocks and a truly mind-blowing bag of tricks, and it left everyone speechless. I think I can safely say that we've never seen a 10-year-old with this much talent before or since, and there's a good chance we never will. When a kid in grade 5 is throwing front blunts down 15-stair handrails, there's a seriously good chance he's going to be the best skateboarder the world has ever seen. That's how every skateboarder felt back then. The hype was real...but would he live up to the hype? Funnily enough, we struggle to answer that question even now. There's people who genuinely believe Nyjah peaked before he was even a teenger, but we'll let you decide on that one. The fact that he scored the ender in this video, nudging out peak-popularity Bam Margera for the title, spoke volumes about his talent.

Leap forward 10 years and we've got Nyjah's most recent part coming in at number 4. This one was released just a couple of weeks back, so it's still fresh in everyone's mind. There's not a whole lot to say about it...and that's the main problem. It's "just another Nyjah part" — but that doesn't mean it's not super gnarly. Those blunt tricks down the Long Beach double rail, a couple of ludicrous Hollywood High bangers, and nollie inward heelflipping out of handrails are nothing to be scoffed at. It's pretty cool going back and watching Elementality, and then this part, and seeing how his tricks have developed. A flip-in here, a flip-out there. He's still skating a lot of the same spots, too, which is pretty cool. If rumours are to be believed, then this part was simply a footage dump filmed several months ago before Nyjah signed with Nike, and the real Nyjah part is going to be a surprise section in Chronicles 3 next month. We'll have to wait and see.

Nyjah closed out 2013 with a barrage of hard-hitting handrail tricks, donned head-to-toe in Thrasher gear, skating to Metallica. Did we mention SOTY voting began just a few days later? It's pretty obvious that Nyjah wanted a shot at the big prize when he dropped Fade to Black, but that should take nothing away from what was an absolutely monumental part. Along with a handful of never-been-done handrail combos, this was the part that really cemented Nyjah as someone who could hold it down with tech ledge lines and manual combos too. Not to mention the 270 kickflip lipslide down a handrail...that's still yet to be matched. Oh, and the Rowley Rail ender...

It's hard to believe this was nearly 5 years ago, but Nyjah's Rise & Shine section is definitely still one of the heaviest parts of all time. It's hard to believe he was only 15 and 16 when this was filmed, because at the time it featured a handful of the gnarliest handrails ever skated, period. This was also the part that threw Nyjah back into the spotlight — he'd been living with his dad in Costa Rica for several years, riding for his dad's company, with no other sponsors. In fact, nobody had heard much from him at all between 2007 and the 2010 Tampa Pro, where he was spotted at a contest for the first time in years. We won't delve into the rumours about his family situation during that time, but we'll definitely give him kudos for bouncing back with a part as heavy as this. Funnily enough, this part was released back in the early days of standalone web parts, and you actually had to buy it on iTunes for $3.99 if you wanted to see it. I'm glad times have changed since then...

This is it — our favourite Nyjah part from the last decade. Why? Because it absolutely cemented Nyjah Huston as a once-in-a-lifetime freak of nature. At the age of 12, Nyjah was flipping into front feebles down 10-stair handrails, kickflipping massive double sets, hitting monstrous rails in super technical lines, and all sorts of other insane shit. Element was probably the biggest skate brand in the world back then, and the fact that Nyjah completely upstaged the likes of Chad Muska, Tosh Townend, Bam Margera, Brent Atchley and Tony Tave in their biggest video release in years really proved that he was already a superstar. He was also still a cool little innocent kid with dreads, whereas nowadays...well, you know.

What do you think? Did we nail the list? Are we a bunch of uninformed idiots? Don't be afriad to let us know your thoughts.

Nyjah steps up his game once more