The greatest ads of a bygone era

Gather 'round, kids! Before World Industries was a shitty K-Mart company, it was the biggest and best thing in skateboarding. Fronted by a portly maniac known as Steve Rocco, World (as they cool kids called it) completely changed the course of skateboarding and left an incalculably large mark on the industry of today. At the forefront of that success was the brand's complete and utter lack of respect or care for every "rule" in the "sport", and the hilarious, crude, distasteful, ridiculous and occasionally borderline illegal magazine advertisements that came with it.

This article covers some of the best World Industries tearsheets from 1988 to 1998, when Rocco cashed in and the brand tanked. World had a beef with everyone – from Powell and Vision to Foundation, Transworld, and even themselves. Especially themselves, actually. And back then, instead of companies bitching to each other on Instagram, they went to war in the pages of Transworld, Thrasher, and eventually Big Brother. Rocco won those wars. Rocco always won... except that one time. 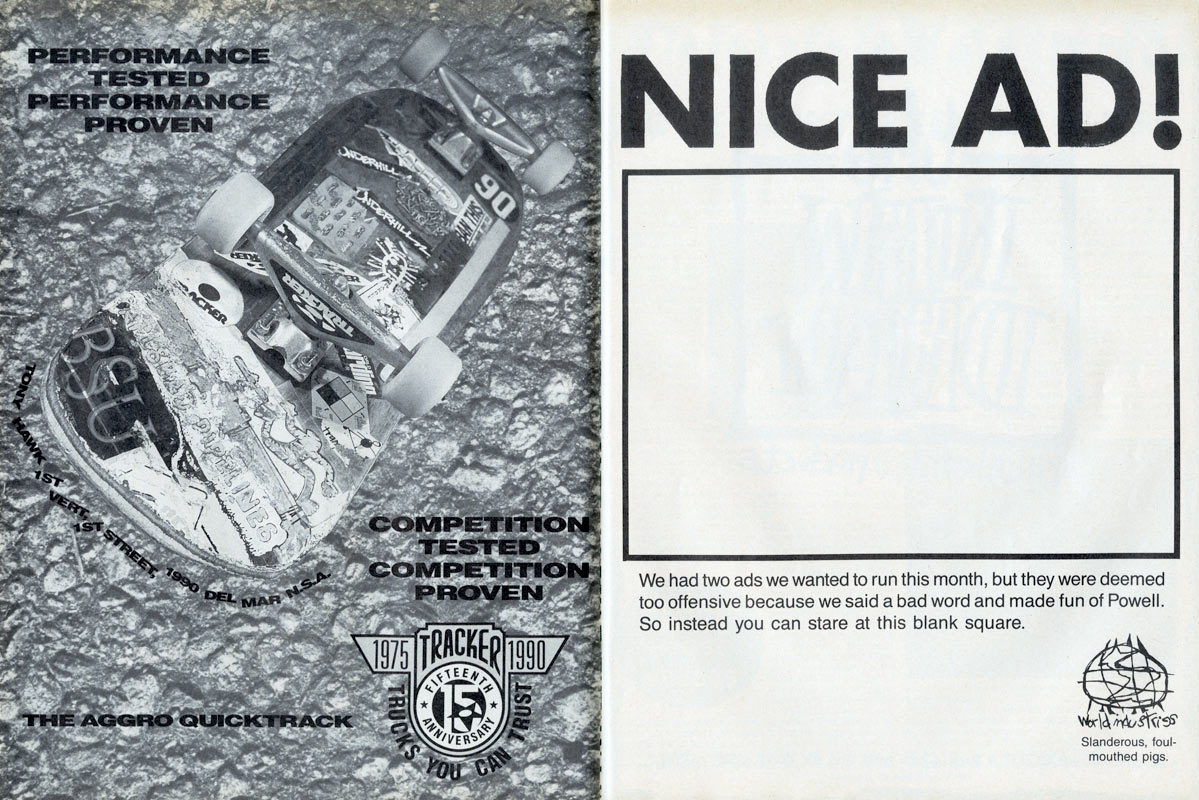 World's infamous "Nice Ad!". "We had two ads we wanted to run this month, but they were deemed too offensive because we said a bad word and made fun of Powell". Transworld's refusal to run the ad led Rocco to create his own magazine, Big Brother, which vowed to run absolutely anything – and did.

Quick flashback to 1987: A freestyle skateboarder named Steve Rocco decided to start a skateboard company, one that would go against the grain of the established "big 3": Vision, Powell, and Santa Cruz. He had a crazy idea to create a company that was actually run by skaters, which was highly uncommon practice at the time, and indeed World Industries became the very first skater-owned company. Rocco convinced his friend Rodney Mullen to leave Powell and run this new brand with him, bringing Mike Vallely over shortly thereafter. Powell didn't appreciate that. The rest is history. 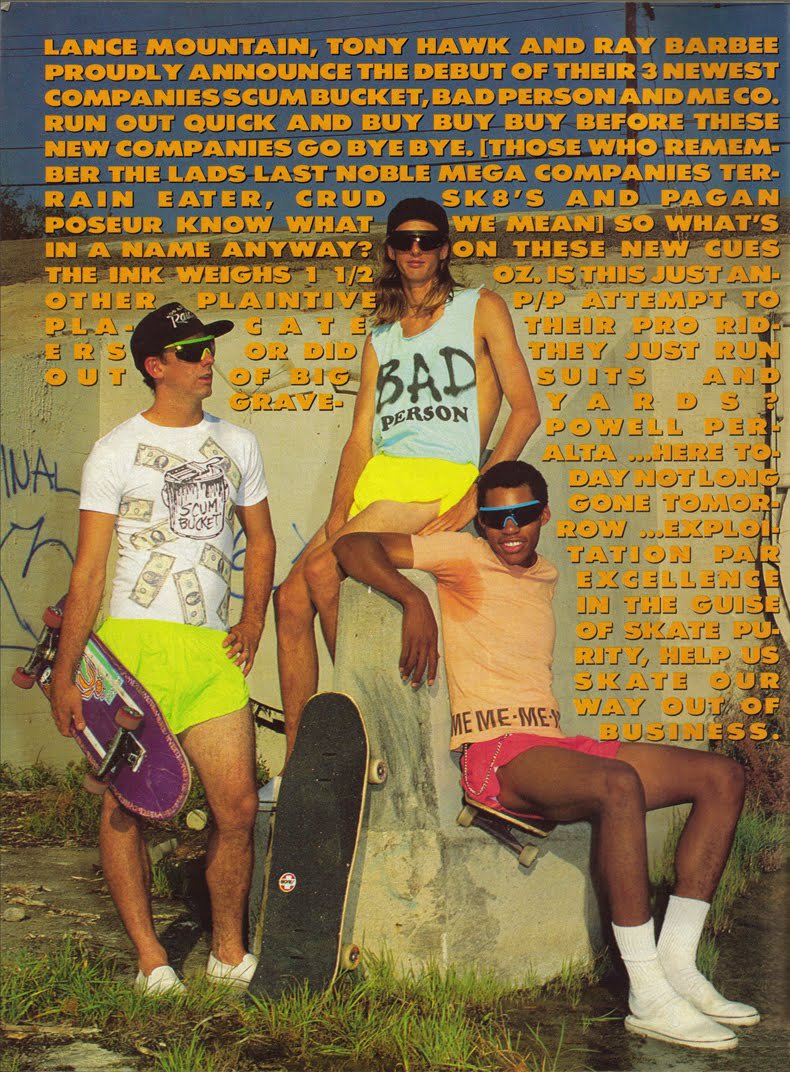 Powell's ad making fun of small companies – in reference to World Industries – which started an ad war in the late 1980s. 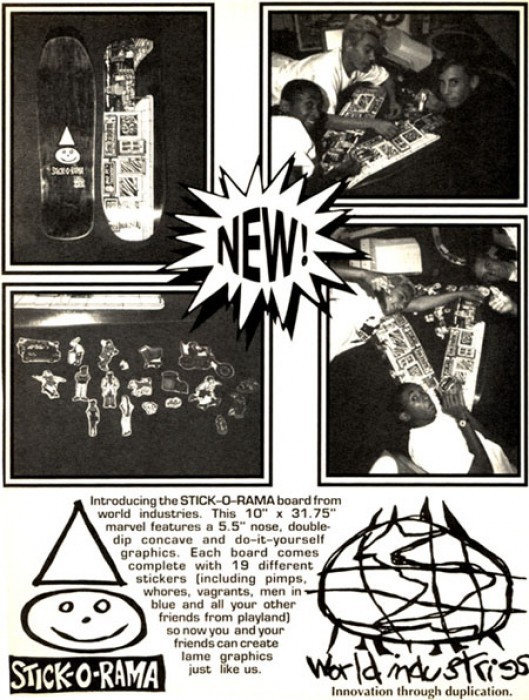 One of World's first ads. Rocco infamously bribed an unnamed wood shaper for Vision's deck mould and used it to create their own wildly popular "Stick-O-Rama" decks. They didn't hide that fact – "Innovation through duplication". 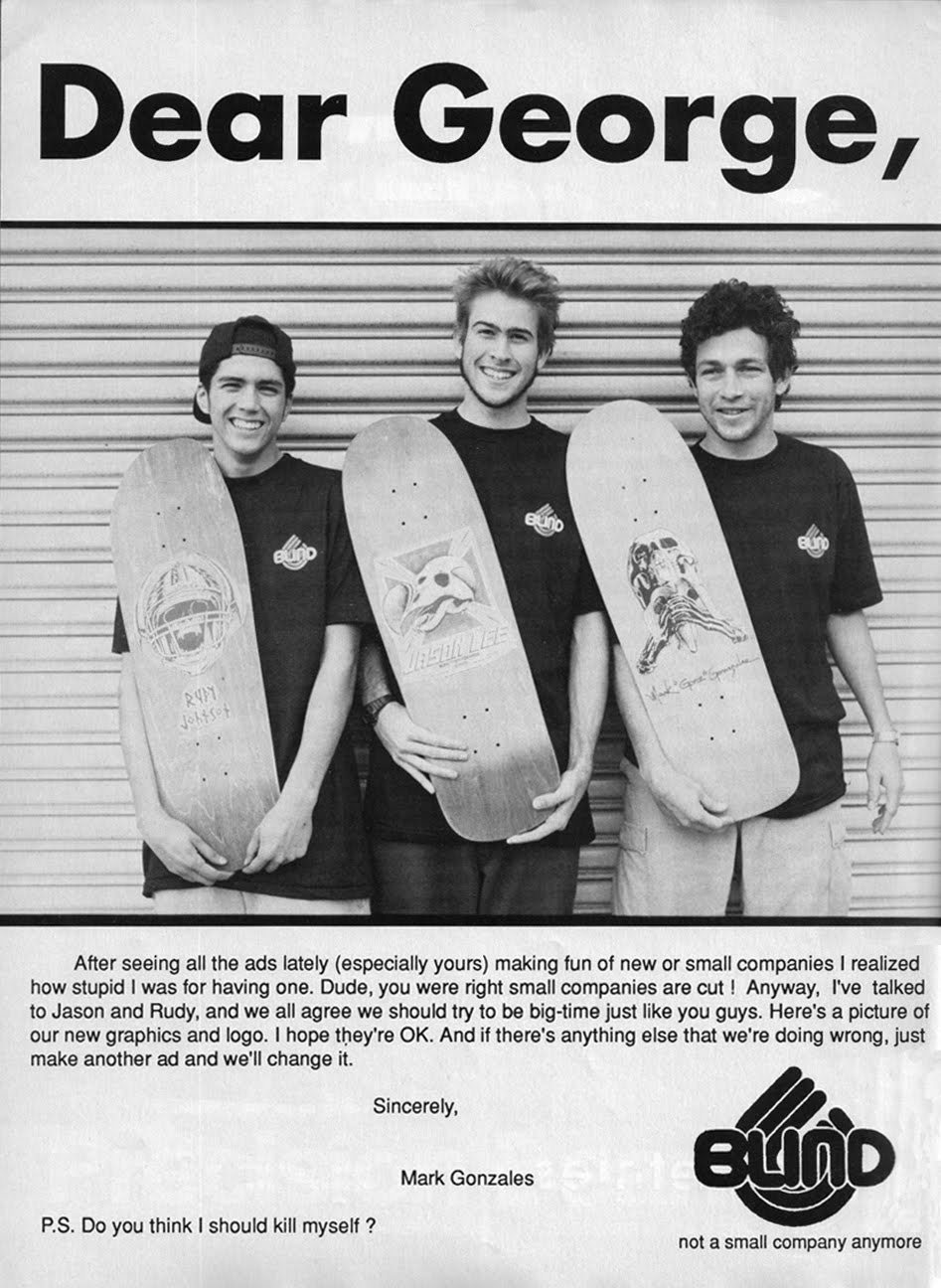 An ad addressed to George Powell from The Gonz, following Powell's ad making fun of small skate companies. Rocco and Gonz had recently started Blind under the World Industries umbrella, and he, along with Jason Lee and Rudy Johnson, made up the first team. This range featured complete rip-offs of classic Powell graphics, and they also debuted a complete rip-off of the Powell logo. "Here's a picture of our new graphics and logo, I hope they're OK". Smart arsery at its finest. 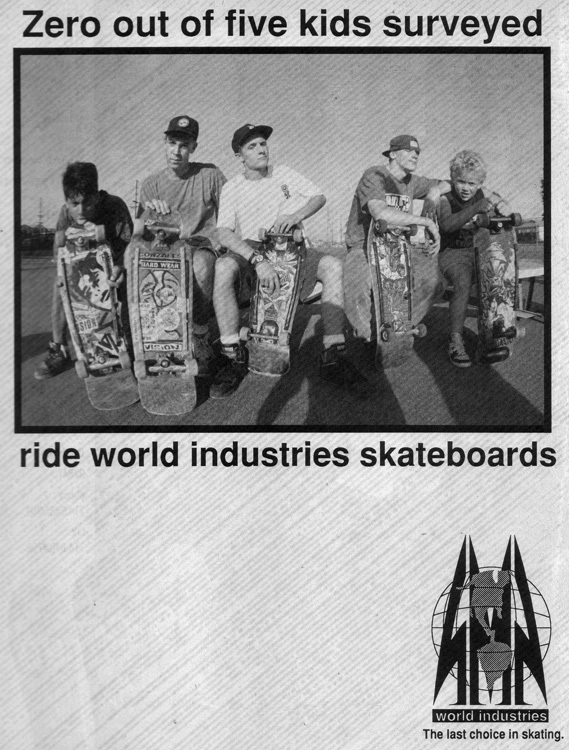 Anti-ads were a common trend at World. 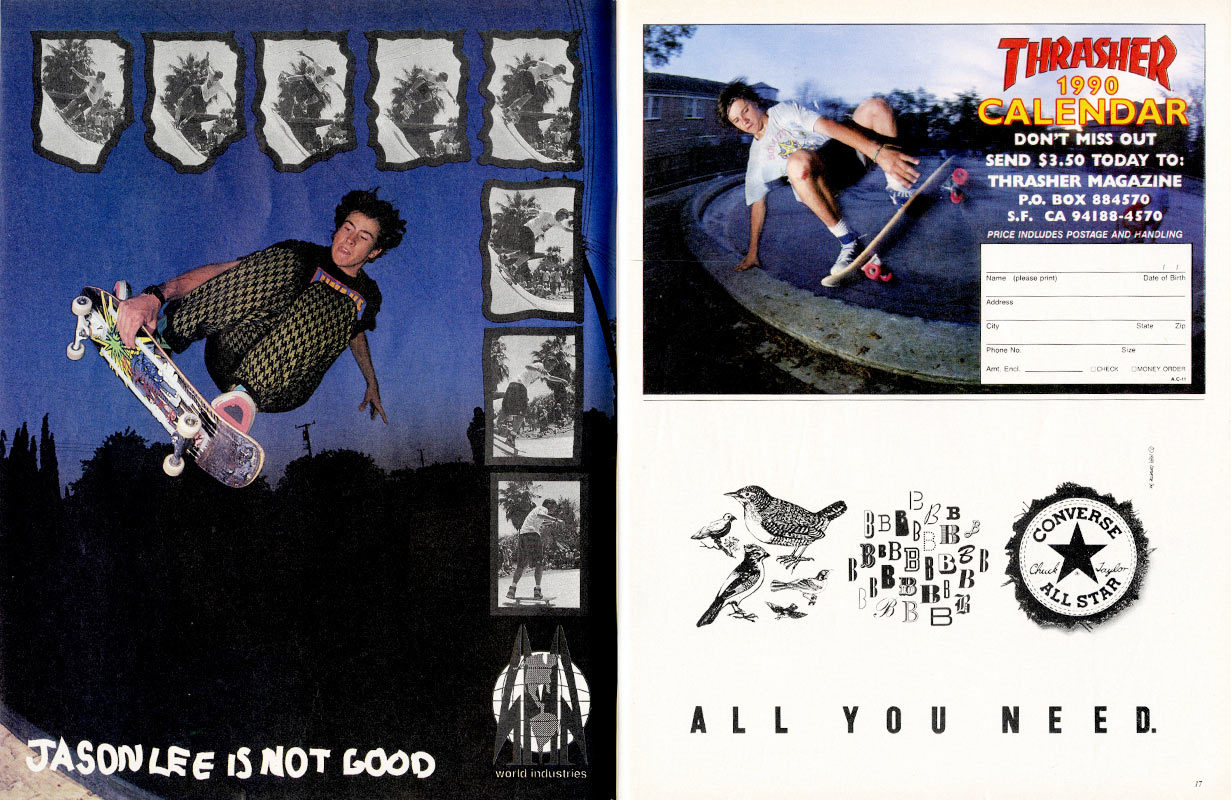 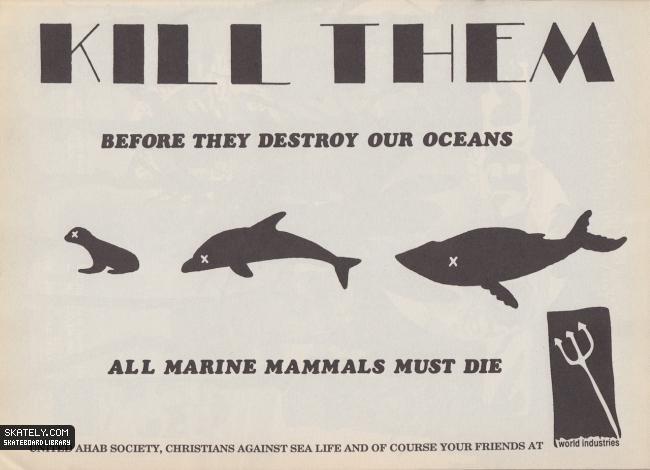 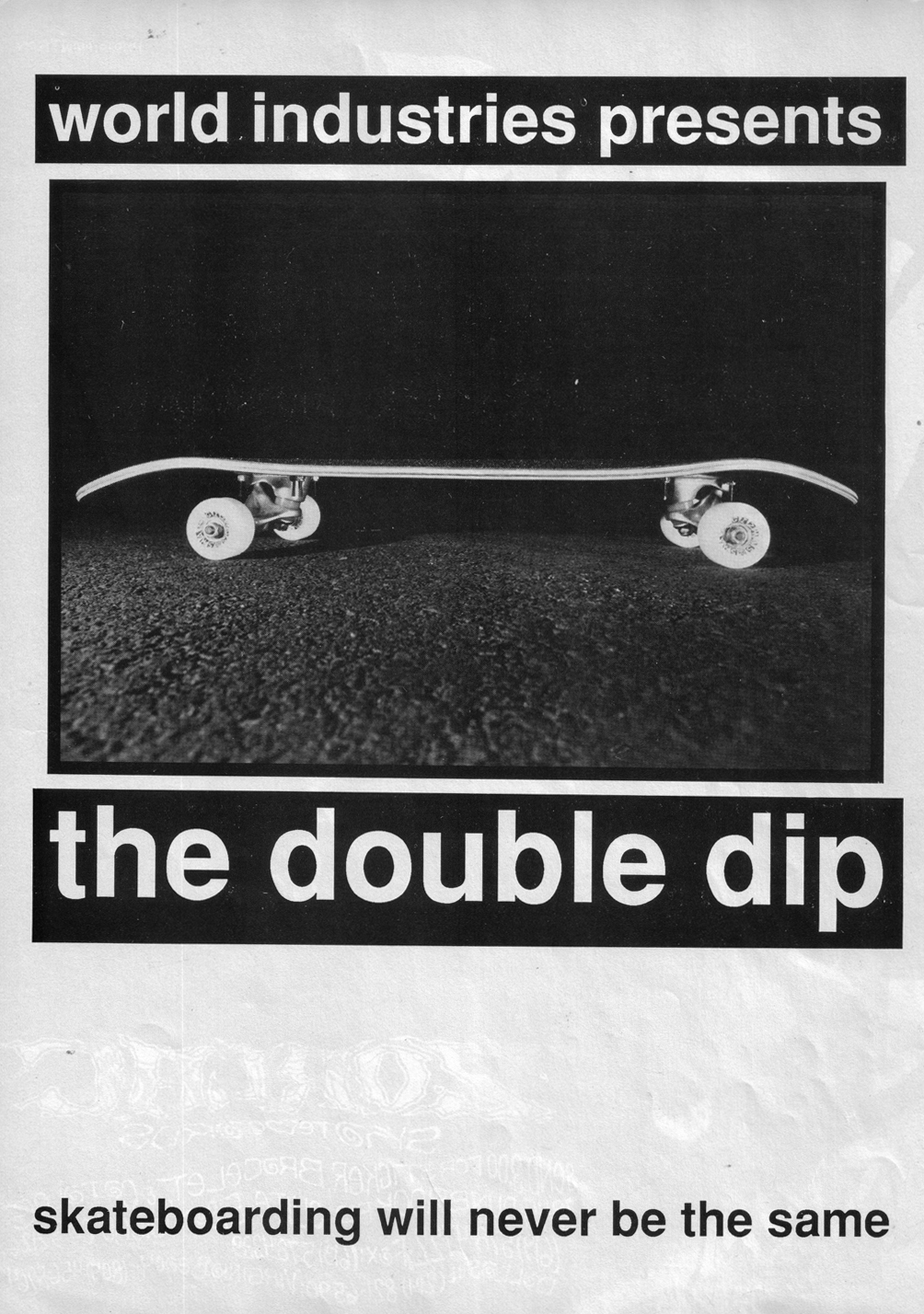 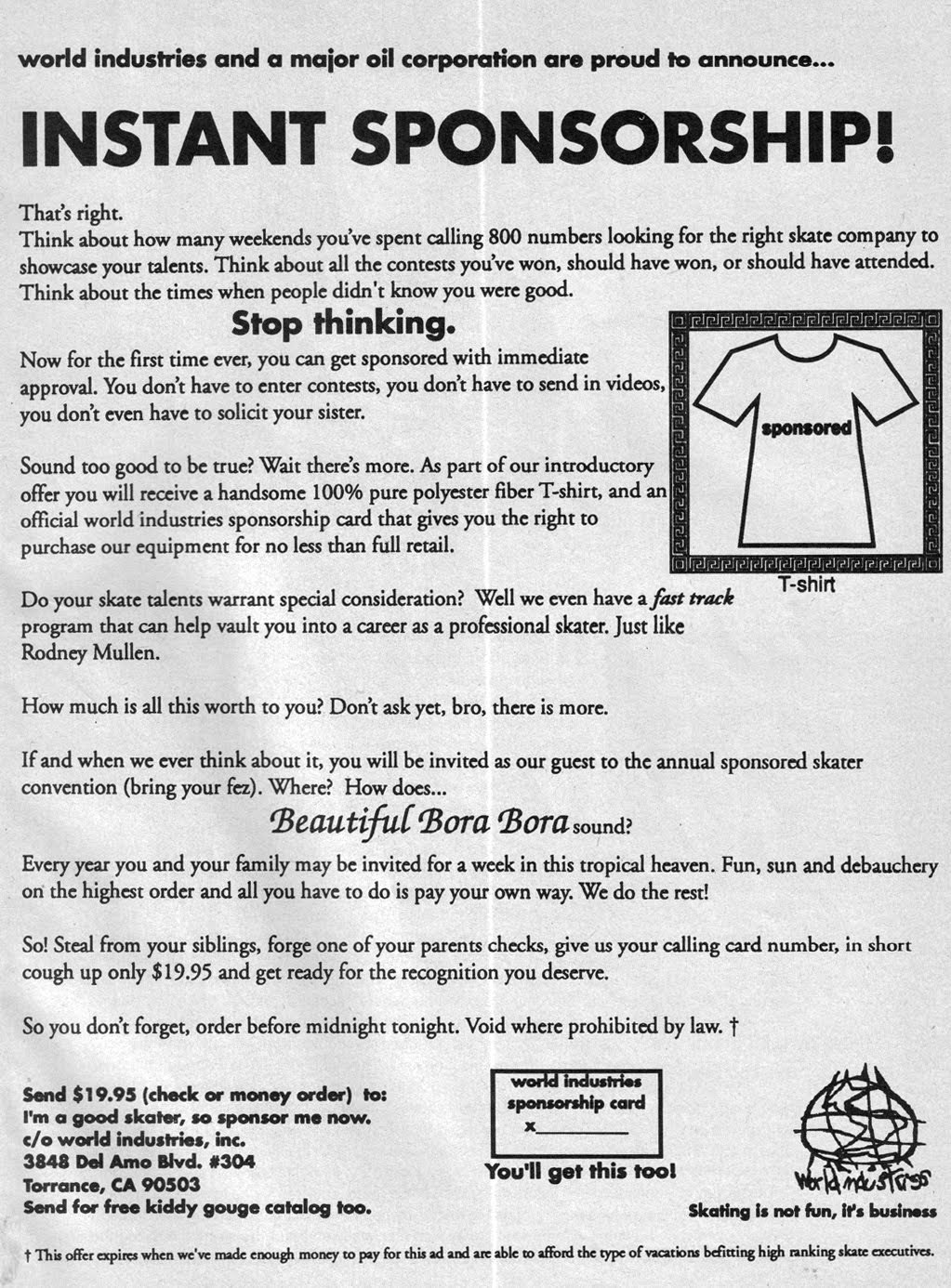 A World ad asking for $20 in exchange for "instant sponsorship". 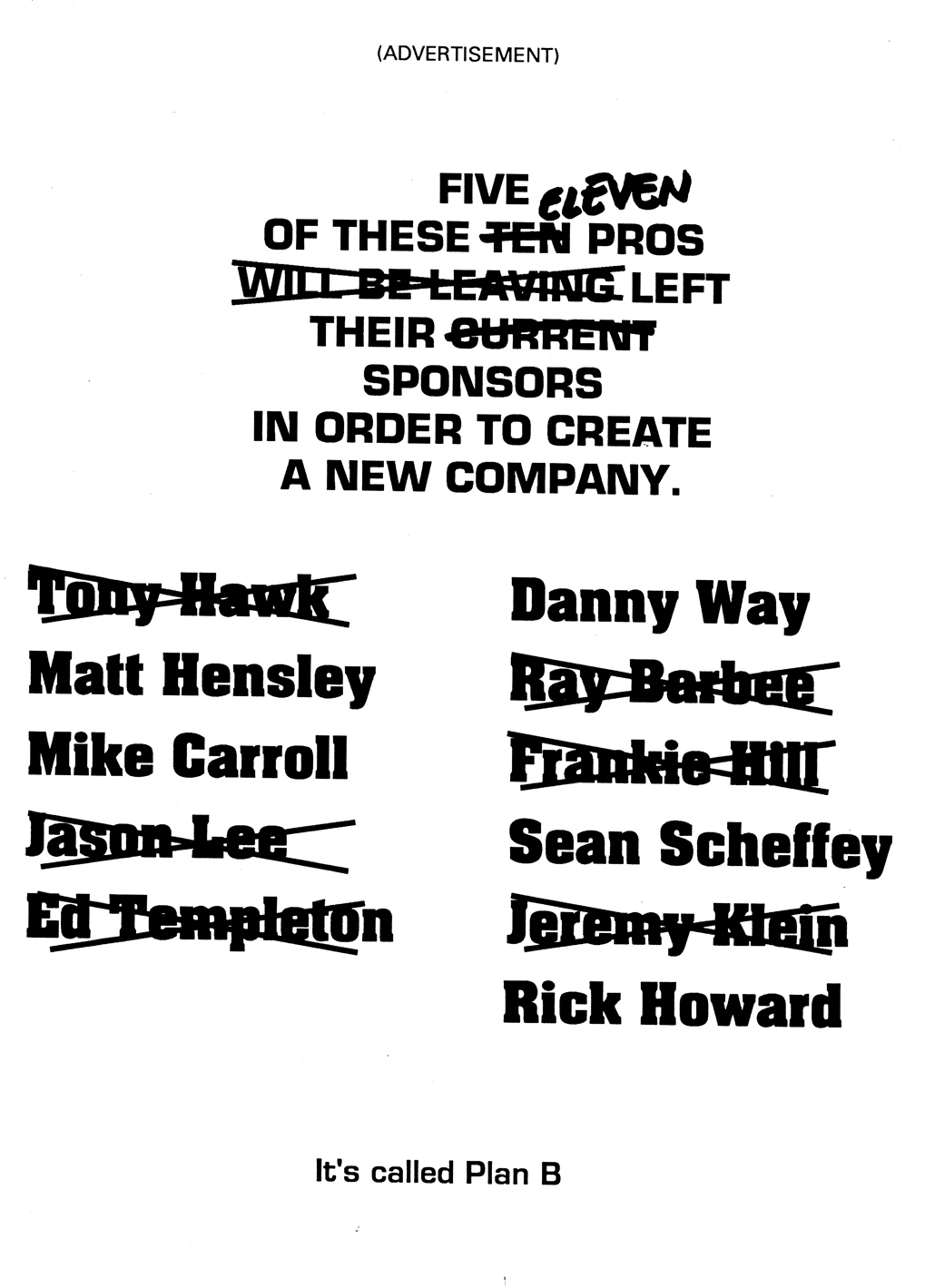 Plan B's first ad. Originally a list of the above skaters (sans Rick Howard) was run, without the marker corrections, leaving everyone to speculate who was leaving their companies. That didn't go down well within the industry... This announcement was run a month later. Plan B was created under the World Industries umbrella in 1991.

And when two of those Plan B riders quit the company and started Girl, Rocco started another company...called Bitch. Bitch directly attacked Girl and its riders through various graphics and ad campaigns. You absolutely couldn't get away with it today (and you barely could back then), but Rocco and World could get away with anything. Bitch folded shortly after, but apparently still exists in Japan, somehow. 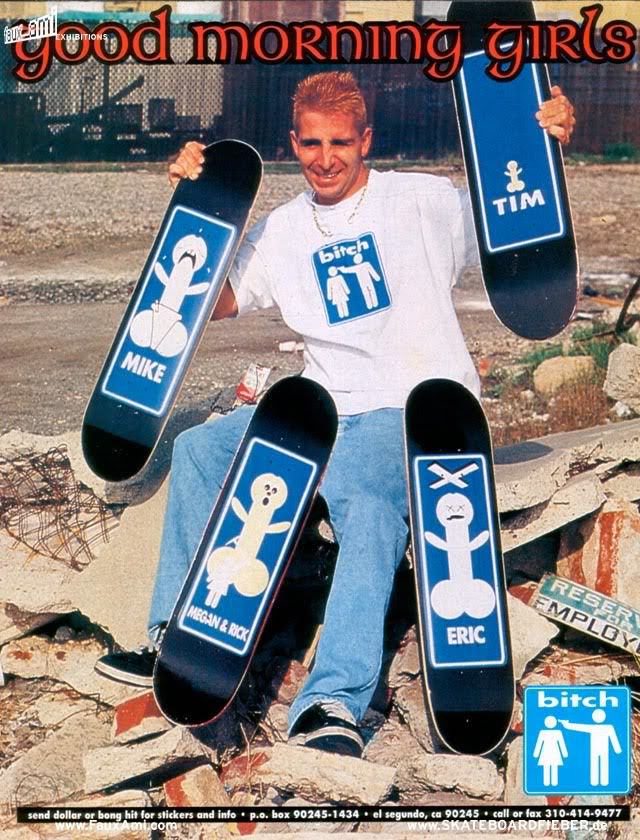 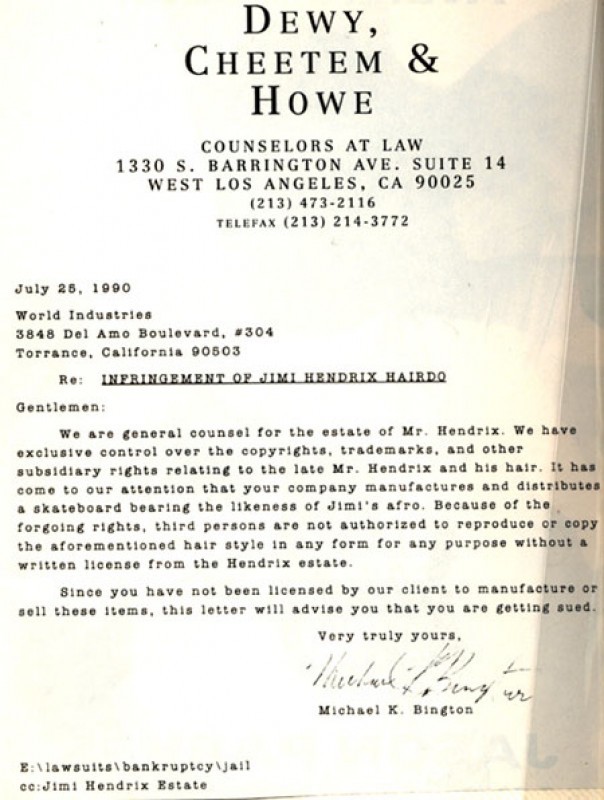 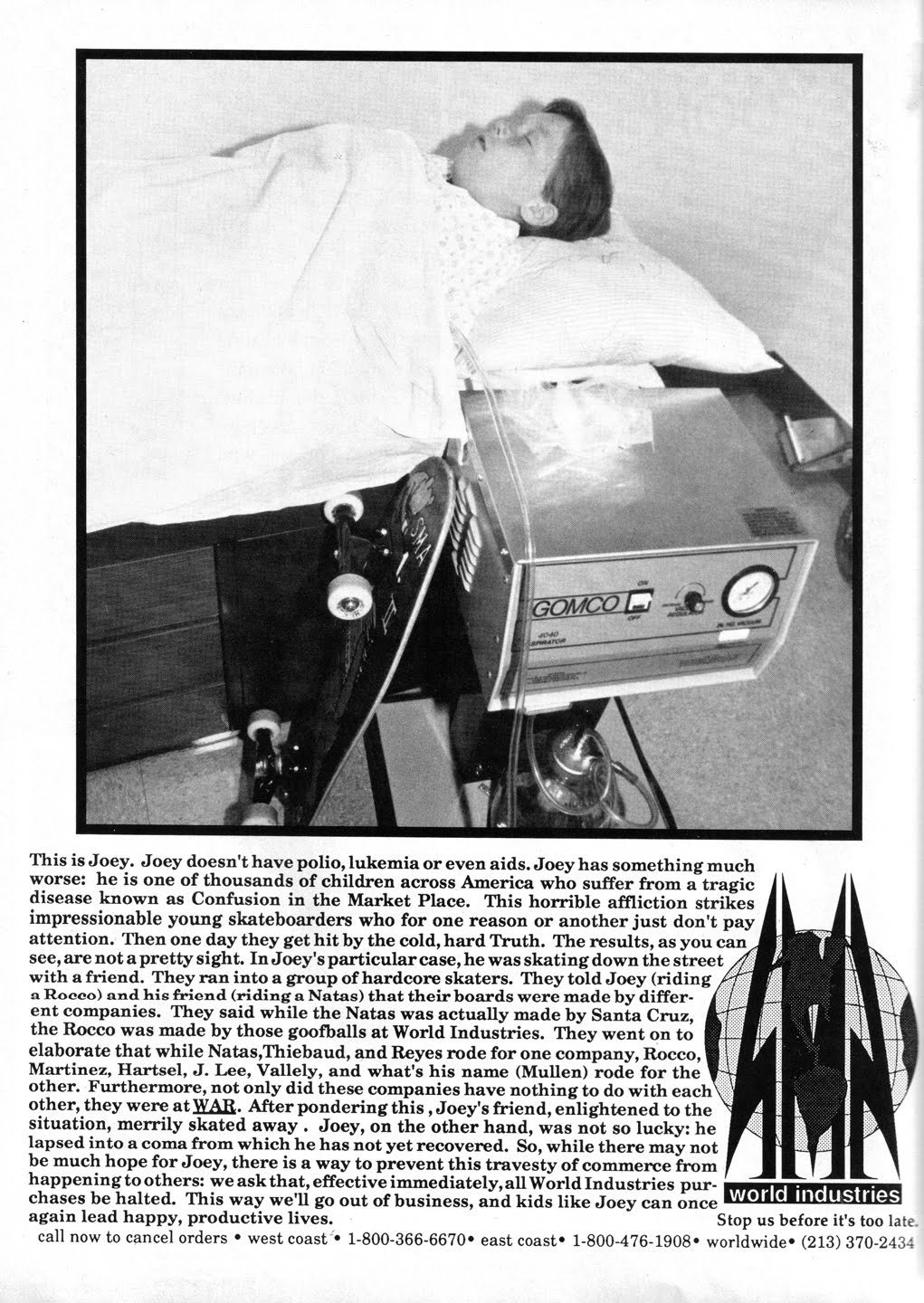 Rocco's ads were absolutely ridiculous... But hilarious too. 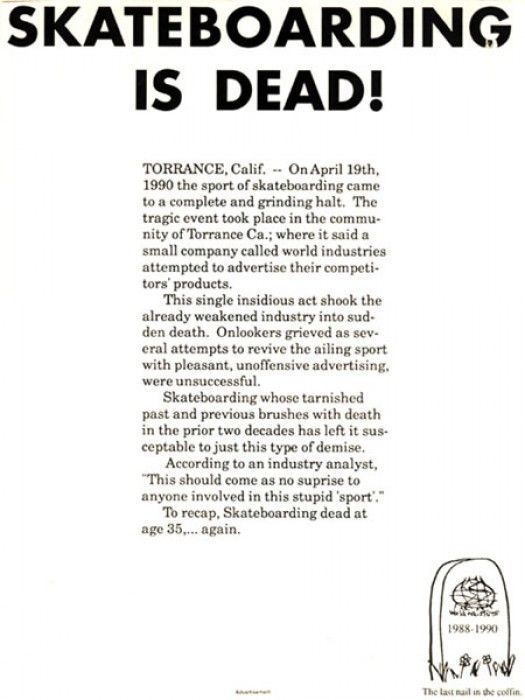 Sarcastically declaring the death of skateboarding following ad censorship in 1990.

There were clearly plenty of gems over the years, but surely none can top the infamous Richard Mulder incident of 1993. Foundation, who'd earlier suggested they had "World Industries by the balls" in a tongue-in-cheek Transworld advertisement, paid Big Brother to run an ad welcoming Mulder to their team. Rocco decided he'd get back at Foundation once and for all, and lured Mulder to World Industries in the meantime. He took Foundation's money for their ad, then ran a World Industries ad right next to it welcoming Mulder to his team instead. The lesson? Don't fuck with Steve Rocco... He'll get you. 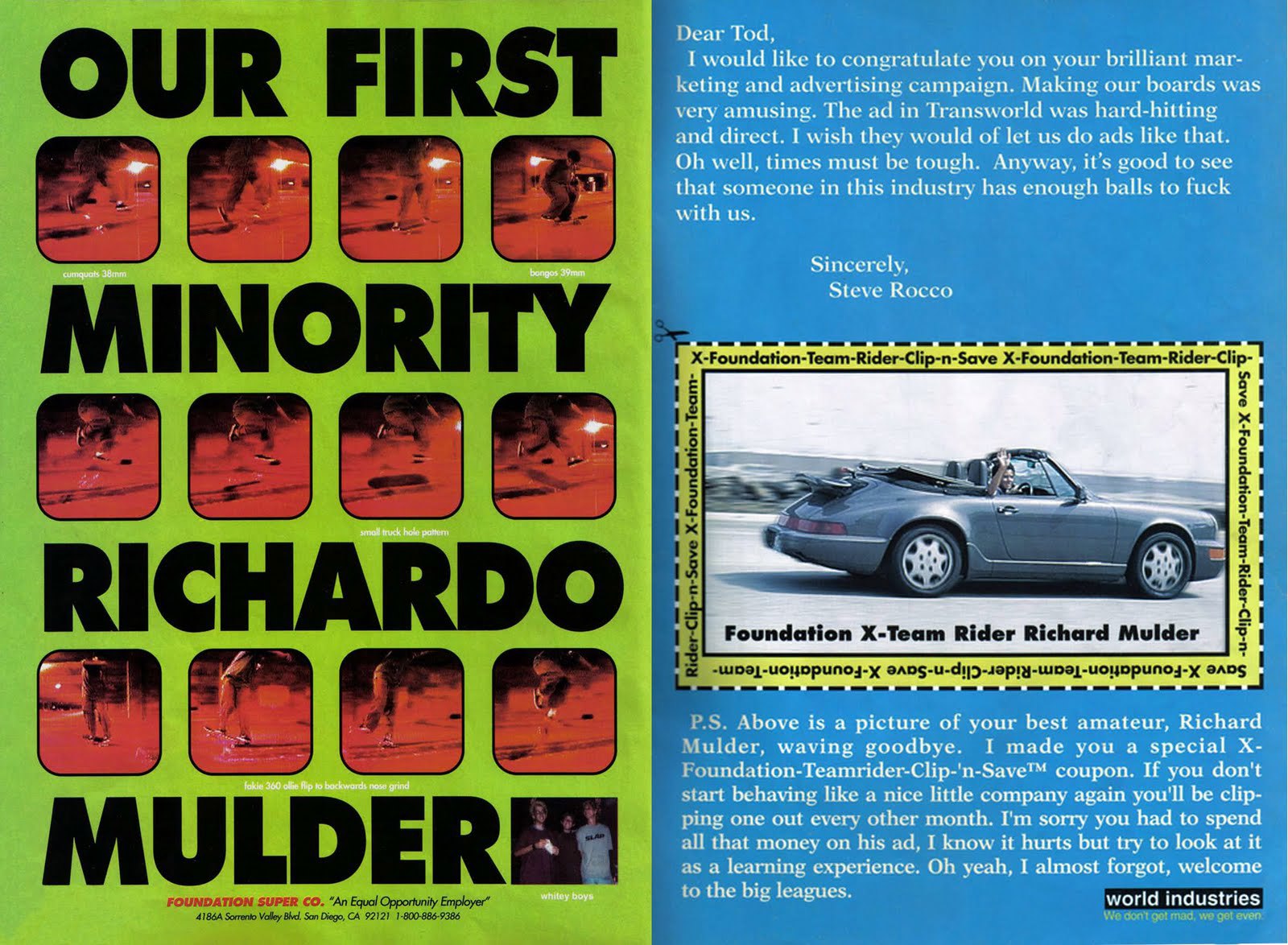 This one sums World Industries up pretty nicely. Ah, how times have changed. We'll leave it at that. 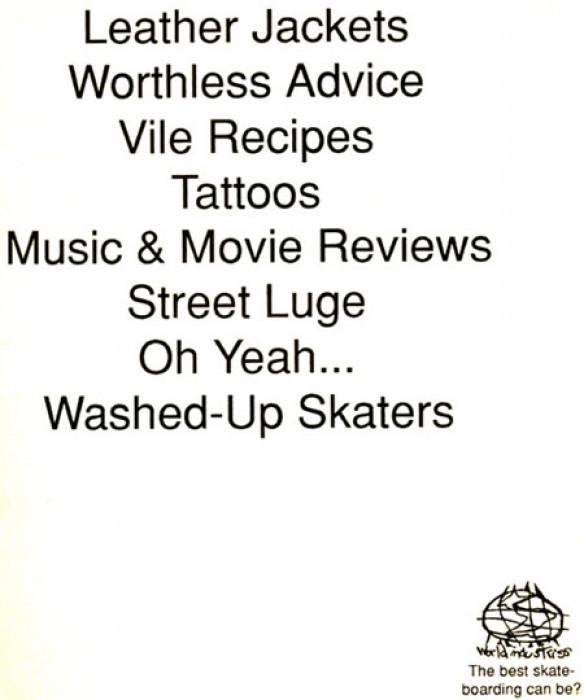 10 Skaters Who First Appeared in 411VM

From Bam Margera to Chris Cole