With the Australian leg of the World Surf League Championship Tour all but a distant memory, we shift our attention to one of the most passionate sporting countries in the world, Brazil. Stop number 4 on the dream tour hits Barra Da Tijuca in the nation's capital, Rio de Janeiro, home of soccer-mad citizens, the Haviana thong, and the G-String bikini. The world's elite surfers are set to do battle in the shifting and challenging beach breaks of Rio. Game on.

Barra Da Tijuca  Barra Da Tijuca is a magnificent beach with fast and hollow waves, serving up rampy walls for every type of manoeuvre. Optimal size for this spot is 4-5 feet, and when it breaks at this size it can serve up a pretty hollow tube or three on the day. 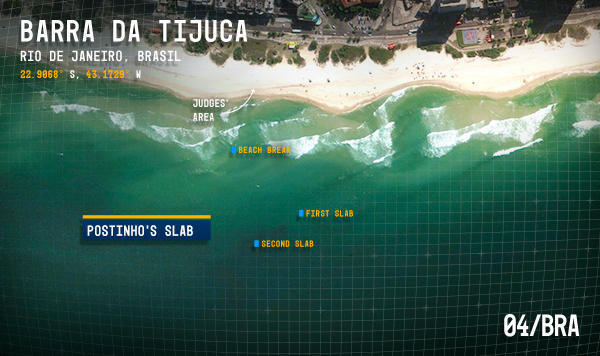 Julian Wilson found his mojo in West Oz after a pretty woeful first 2 events. Being the well-rounded surfer he is, Julian can perform in just about any conditions. Cool, calm and collected with his mojo on, this kid could bring home the bacon. Italo Ferriera and Jordy Smith are two others to keep an eye on. Italo will be on his home turf and out to dominate, while we haven't seen Jordy surf as good as he is in a long time. Whatever he’s doing at the moment seems to be working for him – not to mention he's won here in the past.

Filipe Toledo is a deadset wizard in the smaller beach break waves that Rio will offer, and he’s the defending champ, and definitely one to watch. Gabriel Medina, the hometown hero, can always be counted on to put on a show. His hunger to win, combined with his cat-like skills and consistency, will almost surely pay off. If John John Florence can string together a few heats and doesn’t let his opponent take off on waves during the dying seconds (like at Margaret River), he too could be a top pick. He's also a past winner, taking home the top gong in 2012.

The Drug Aware Pro was an amazing contest with consistently good surf throughout the waiting period. We didn’t see any action out at The Box, much to the disappointment of surf fans, but were still treated to decent conditions. Finals day saw the Hawaiian injury replacement, Sebastian Zietz, take down superstar Julian Wilson to claim victory – not bad for a wildcard who fell off tour last year.

Brazil's Italo Ferreira further cemented his place in the championship tour elite with a great event, advancing to the semi-finals at Margies and currently finds himself 3rd in the world. World number 1 Matt Wilkinson also kept his form alive, surfing into round 5, and he'll look to cement his place at the top in Rio. Joel Parkinson, the only veteran in the top 10, clawed his way up the ranks with a semi-final berth, while the likes of Kelly Slater, Dusty Payne, Davey Cathels and recent retiree Taj Burrow all endured sub-par events with round 2 and 3 exits. 2016 is by far one of the craziest years in recent memory.

Will Seabass and Julian keep their momentum going into Brazil? Will Matt Wilkinson keep that engine chugging at the top? Will the Brazilian Storm hit as forecast? Or will we see it all get turned on its head? Get in the passion pit, wave your flag and cheer on your favourite surfers as they do battle in Brazil!

Making the most of an unlikely chance

We look ahead to the third tour stop