Some interesting facts about Tokyo 2020

It's been well over a year since skateboarding was officially granted entry to the Tokyo 2020 Olympic Games, and yet most of the specifics surrounding skateboarding's inclusion are still shrouded heavily in uncertainty. We don't know who is actually going, the qualification process has yet to be formalised, the structure of 'teams' is completely unknown, and the nations who have actually committed to sending a team are few and far between.

With now under 3 years before Tokyo 2020 begins, questions are being raised about the perceived lack of organisation and planning among nations with regards to their skateboarding programs. It's still a fair while off, though, and certainly no cause for too much alarm – at least not yet. Some aspects of the games are more-or-less set in stone already, and we've dug through the small nuggets of information available to the public to clear – and confirm – some of the rumours. 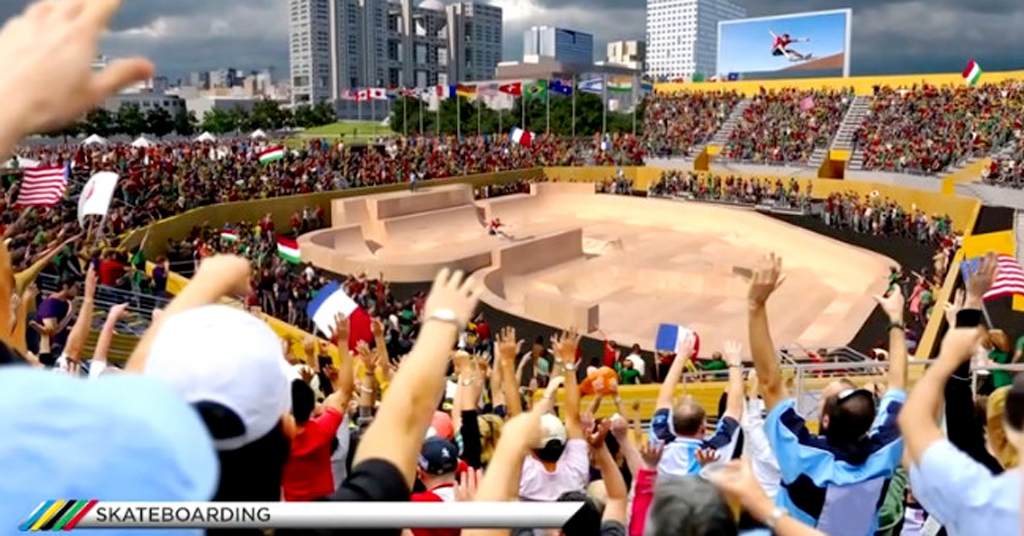 An artist's rendering of the Tokyo 2020 park course – not the official course. Image: Olympics.com

If you're wondering which disciplines will be represented at Tokyo 2020, wonder no longer. The Olympic competition will be split into two distinct contests. One will cover street skateboarding – think Street League courses; rails, hubbas, ledges, stairs. The other will be a park discipline, which will target transition skaters – think Vans Park Series. In the official words of the Olympics:

As expected, the Olympics will feature both male and female skateboarders competing in each discipline. According to the ISF, the total number of competitors is expected to be around 80, with an equal split between genders. That means we can expect roughly 40 men and 40 women to compete at the Games, possibly split between 20 per discipline, although it's possible that some skaters will compete in both park and street. These numbers have yet to be officially confirmed, however.

2. Rollerbladers Are In Charge – Sort Of 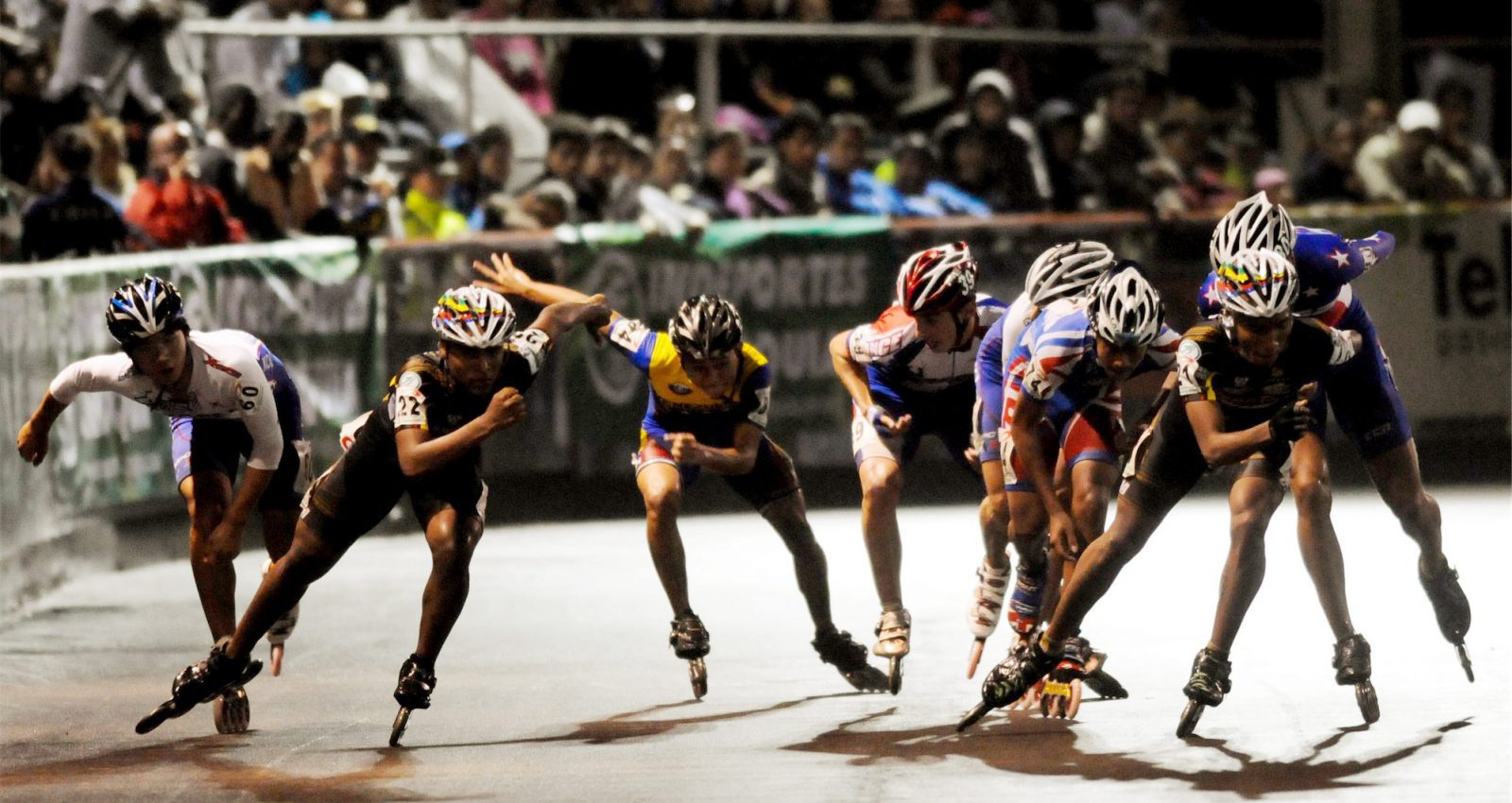 The same way snowboarding is bizarrely governed by skiers, skateboarding will be governed, at least in part, by the Fédération Internationale de Roller Sports (FIRS). Thankfully for skaters, the International Skateboarding Federation was able to strike a deal with the Olympics to co-govern the sport alongside our rollerblading cousins, forming the Tokyo 2020 Skateboarding Commission, despite the best efforts of FIRS to take full control.

"The Commission is in charge of all aspects of producing the Skateboard Street and Park Terrain events at the Games. The three-person, international panel of members that form the Tokyo 2020 Skateboarding Commission include: Gary Ream, President, ISF; Simone Masserini, Executive Director, FIRS; Neal Hendrix, pro skateboarder and ISF athlete representative."

Thankfully Neal Hendrix will be an athlete representative at the Games, although it's unclear if Gary Ream has ever set foot on a skateboard. The closest image we could find featured Ream appearing to use a napkin to avoid having to touch a skateboard... Make of that what you please.

3. Everyone Will Wear Nike 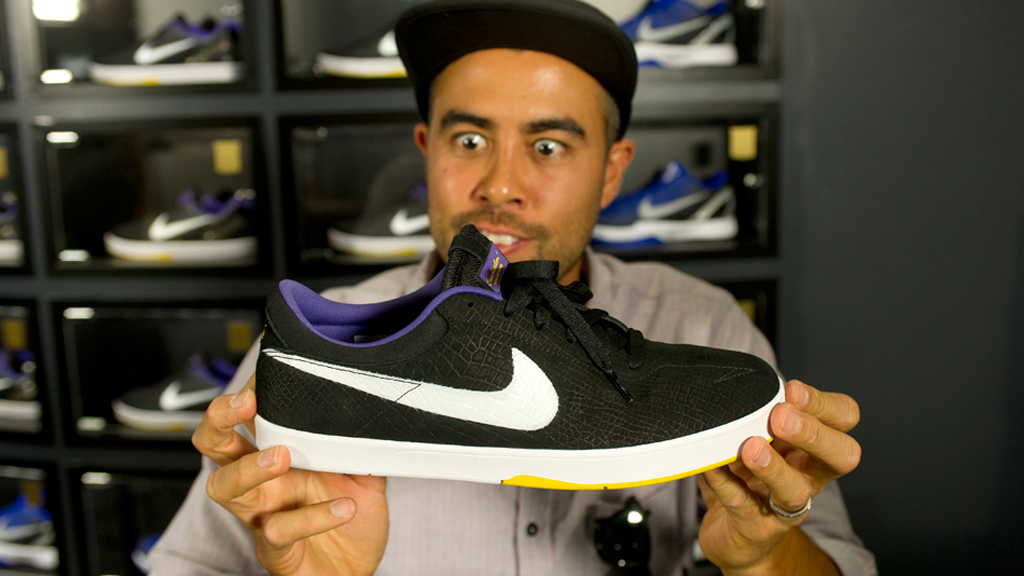 This one almost sounds untrue, but it's absolutely confirmed – at least for US athletes. Part of the US Olympic Commission's massive deal with Nike stipulates that all athletes must be dressed head-to-toe in Nike apparel and footwear during all official Olympic engagements. This includes press conferences, interviews, official appearances and medal ceremonies, however it doesn't extend to appearances in the actual competition, as far as we understand.

Under a hypothetical situation, let's say Chris Joslin claims an Olympic medal. After competing, he'd be forced to change from his Etnies shoes into a pair of Nikes, and wear whichever swoosh-laden apparel the USOC decides, before the medal ceremony or any interviews could take place – despite having no affiliation with the company otherwise. This has led to some controversial circumstances in the past, such as Michael Phelps, who endorses Under Armor products through a multi-million dollar deal, appearing on the cover of Sports Illustrated in Nike apparel.

Each nation has their own sponsors, and it's not necessarily Nike in every case, although the rules are largely the same across the board. The UK has an even stricter deal with Adidas (which we're about to cover) while Australia's Adidas deal appears to have expired in 2016. We've reached out to the Australian Olympic Commission for any sponsorship news they can provide.

4. Sponsors Will Be Silenced

We touched on the United Kingdom's strict sponsorship deal with Adidas, and now we'll elaborate further. At the Rio 2016 Olympics, the British Olympic Commission outlined a number of sponsor-related rules that athletes had to sign-off in order to be allowed to compete. The rules outlaw sponsors who aren't partnered with the BOA from congratulating athletes or even wishing them good luck in a public forum during the Olympic Games.

Put simply, any skate sponsor (besides Adidas) must pretend that their UK rider is not actually at the Olympics, completely ignoring the competition altogether, or said skateboarder will be disallowed from competing. It's unclear whether this extends to other nations, however considering that Adidas has partnered with numerous Olympic Commissions across the world – including Australia for the past 12 years – it seems likely. Welcome to corporate sports.

5. Australia Is Way Ahead of the Game 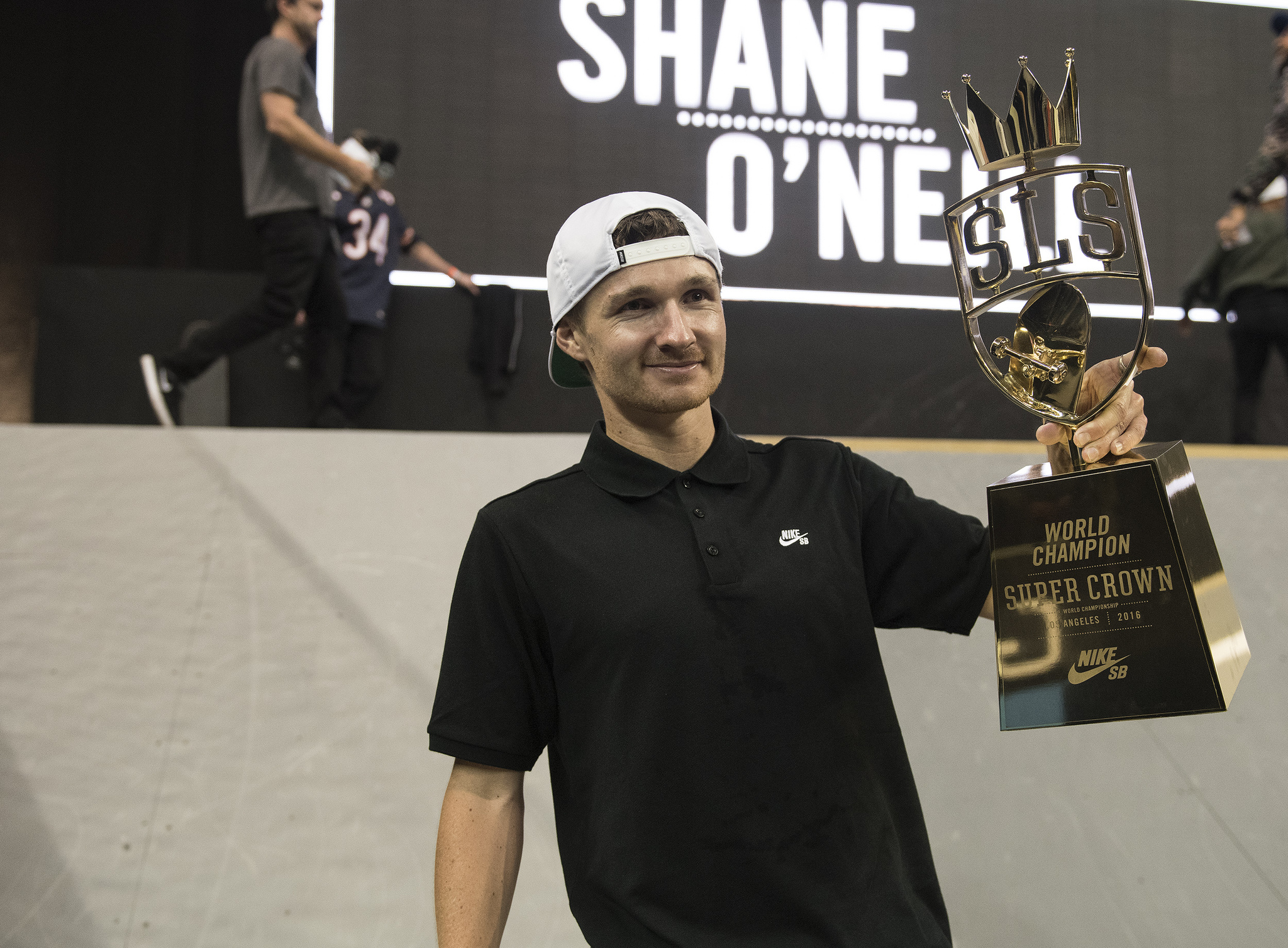 While some nations, namely the USA, have seemingly made little progress with their Olympic skateboarding program, Australia has stormed out of the blocks. The AOC became the first Olympic Commission to publicly support a skateboarder when they granted Shane O'Neill a $20,000 medal incentive bonus almost immediately after the sport was confirmed for Tokyo 2020. Two Australian skateboarders were recently granted full university scholarships as a direct result of skateboarding's inclusion in the Games, while the Australian Skateboarding Federation has already partnered with the AIS for several skate-related Olympic workshops across the country.

A number of Australian skateboarders and genuine industry staples are also involved in Australia's push for the Games, including the likes of Renton Millar, Russell Grundy and Chris Middlebrook, further legitimising Australia's approach to Tokyo 2020.

“Traditionally skaters have been left up to their own devices to learn all the aspects needed to progress their strength and conditioning, nutrition, recovery and how to progress their skills. We are giving them a lot of shortcuts and they are eating it up", said Renton Millar during a recent camp at the AIS.

“It doesn’t take anything away from the past approach with skateboarding, we still have a lot of fun and encourage creativity".

6. The Olympic Course Will Be Open to the Public 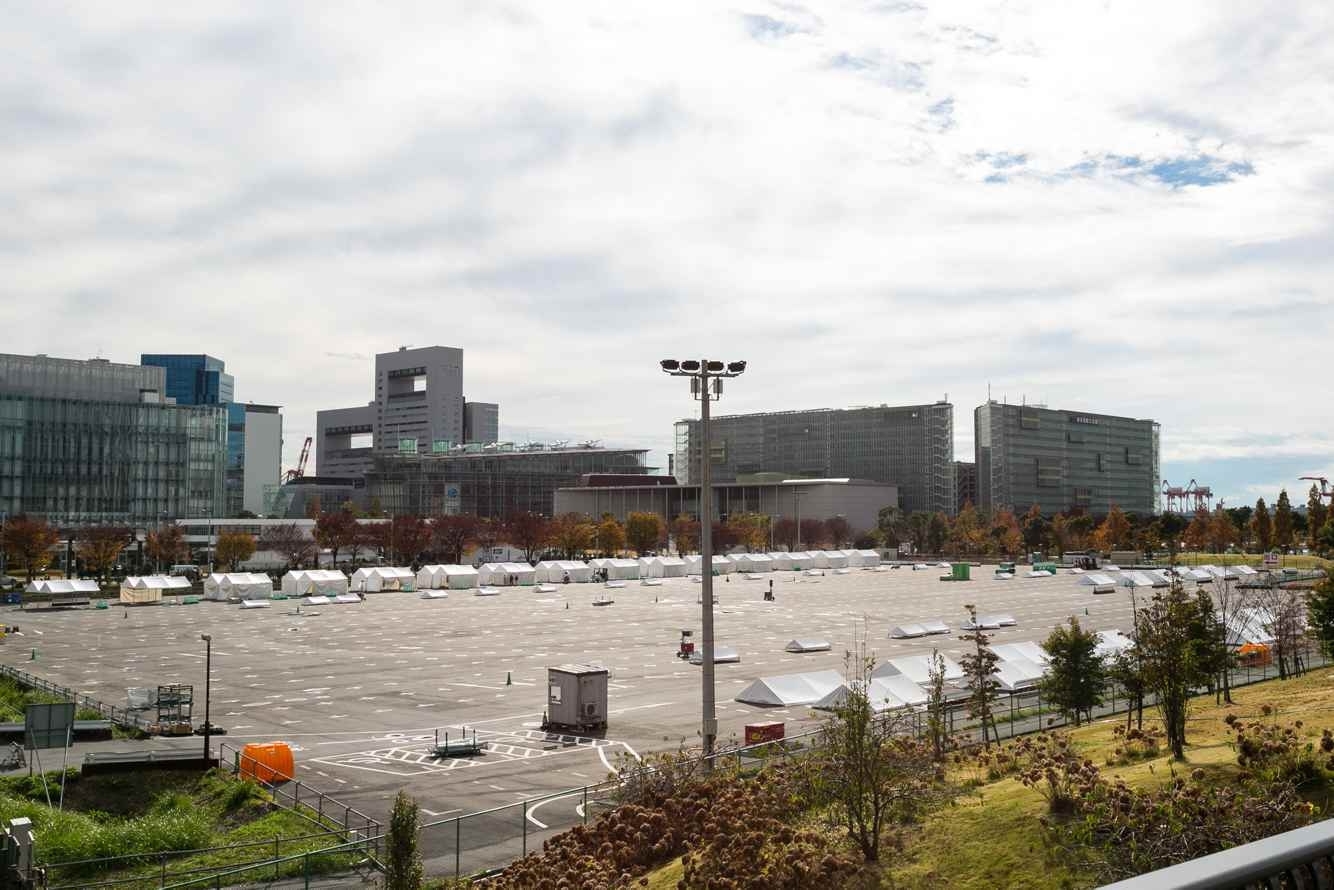 Skateboarding will be held at the Aomi Urban Sports Venue in Tokyo, where street and park courses will be purpose-built for the Olympic Games. Amazingly, the IOC has confirmed that the skateparks will be open to the general public to skate during the Olympics, even on the same day they're used for competition.

“There will be competitions and then, say in the afternoon, people can access and have a go for themselves. They’re all sports that, as you can see, engage with young people. In terms of our vision and Tokyo 2020’s vision of wanting to bring these sports to the people, I think this is a good location", IOC executive John Coates told the Japan Times.

This is surprising news considering the logistics and legal hoops you'd imagine the IOC would have to jump through, but we're certainly welcoming it.

Just make sure you're wearing the right brands when you show up.