We look ahead to the second tour stop

After an action-packed season opener on the Gold Coast, the world's best surfers have packed their bags and headed south for more Aussie action. Victoria's Bells Beach plays host to the Rip Curl Pro, the longest running professional surf contest in the world, and this year marks its 55th year. Past event winners include superstars like Mick Fanning, Kelly Slater, Joel Parkinson, Adriano De Souza, the late Andy Irons, and Mark “Occy” Occhilupo. We're in for another epic contest.

Bells Beach is located just outside the sleepy town of Torquay, Victoria. Facing south, Bells is exposed to long and powerful Southern Ocean swells, and when combined with a fresh northeast wind and the defined reef, we're treated to a dream right-hand point break. 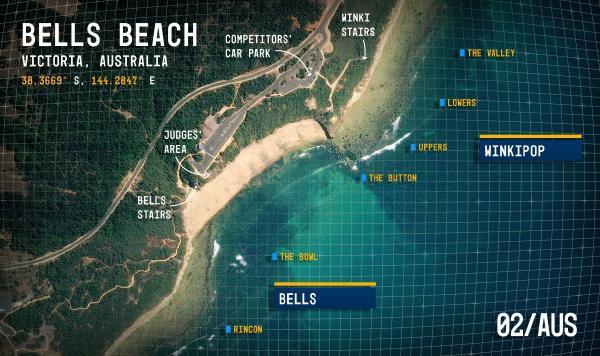 The Quiksilver Pro was an action-packed event this year. We saw Australia's very own Matt “Wilko” Wilkinson take his maiden win, overcoming Kolohe Andino in the final. Injury replacement Stuart Kennedy had a stellar event, surfing out of his skin and taking down former world champions on his way to a shock semi-final finish. Filipe Toledo was also enjoying a dream run until he came unstuck in his semi-final against Wilko. As predicted, the rookies dominated at Snapper – Ciao Ibelli, Kaona Igarashi and Connor Coffin all had great events. Some big names also fell early, much to the surprise of many. Kelly Slater, Julian Wilson and Jordy Smith were all dumped out in round 2 – let's hope these guys bounce back into title contention.

Owen Wright and Bede Durbidge are still out of action. Owen is nursing a horrific head injury from Pipe last year, and Bede continues to recover from a pelvic injury also sustained at Pipe. Stuart Kennedy and Adam Melling will take their spots respectively. Filipe Toledo has unexpectedly pulled out of the Rip Curl Pro and also Margaret River, after sustaining a groin injury while attempting an air during his semi-final clash against Matt Wilkinson. His absence means Hawaiian Dusty Payne will get another crack at CT competition. 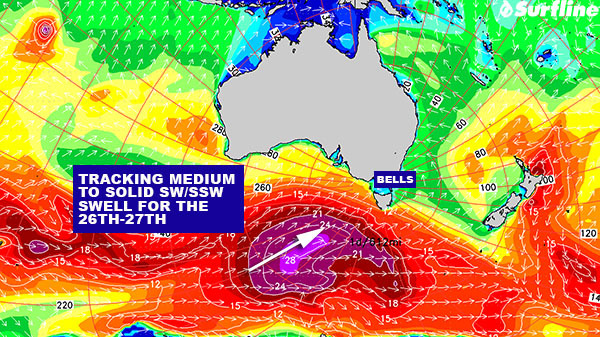 The first day of the event waiting period, Thursday the 24th, looks slow. However, a new SW swell looks likely to build slowly on Friday and peak sometime over the weekend of the 26th-27th with medium to possibly solid surf. Going further out, long range model guidance indicates a favorable pattern for at least medium size swell through much of the last week of March.

Who will ring the bell for 2016? Can world number 1 Matt Wilkinson carry his momentum into Bells? Will some of the top dogs resurrect their world title hopes? Will the rookie storm continue to destroy? All questions will be answered in just a few days time...

The Aussie's first ever tour win