Is this the perfect companion for smartphone skate filming?

Remember when making a skate clip meant sneaking out with your parents' cumbersome VHS camera, constantly rewinding and taping over the bails with makes, and wondering how the heck they put music into the background of Blind's Video Days? If you're under 25, you probably don't. We live in a world of instant media, filmed on iPhones and the like, at the flick of a smartphone screen. When you take a step back, it's pretty hilarious – imagine showing someone a modern iPhone clip back in the 90s, and then telling them you filmed it on your telephone. Bizarre.

We've previously talked about the monumental impact the smartphone has had on skateboarding – it's something that goes without saying at this point. It's no surprise then that companies are offering up solutions to the problems that arise while filming with a tiny piece of plastic and aluminium, and the Hotshot Handle is one of those contraptions. Smartphones can certainly be awkward to hold while you're filming with them – especially if you need to zoom or roll alongside a skater – and the Hotshot Handle aims to alleviate those issues. So how does it stack up? 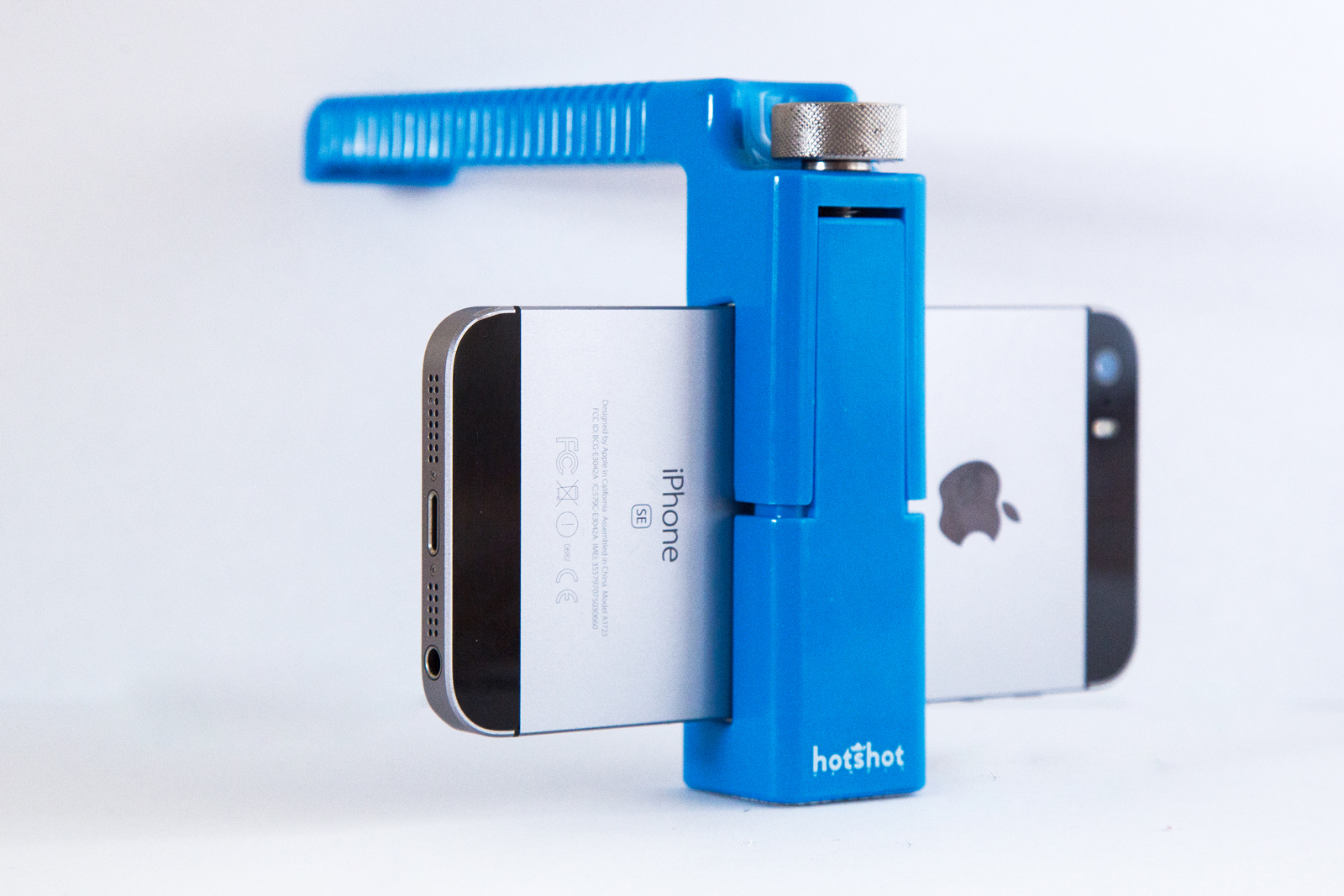 The Hotshot Handle is made mostly of plastic, which makes it extremely light and, at first glance, makes it seem a little fragile. Fortunately it's not the shoddy piece of plastic it might initially seem to be, and after genuinely wondering whether it would adequately hold my iPhone in place, my fears were quickly quashed. The device locks your smartphone in place with a clamp system, which can be adjusted to fit any reasonably sized phone, and can be tightened in a way that makes sure your phone is tightly secured and totally safe – with some slight padding to avoid any potential scratches.

The grip part of the handle is hardly much to write home about. The plastic is rippled which makes it easy to grip onto, but doesn't feature any padding or added comforts. It's perhaps what you'd expect from a plastic handle, though, and to be honest the lack of grippy material went barely unnoticed while I used it. Filming with the Hotshot never felt uncomfortable, and its plastic nature meant it was light and easy to carry around for extended periods of time – exactly what you'd want from a phone handle.

The majority of people who purchase a smartphone handle do so because they want to film fisheye angles with it. While the handle obviously makes fisheye filming much simpler, I was blown away by the effect it had on filming regular, long-lens angles. I was using the iPhone SE during the review period, the lightest current-gen iPhone, and the stabilisation I was able to achieve with the Hotshot was nothing short of totally surprising. Holding the handle instead of gripping the actual phone makes filming anything a breeze, but rolling long-lens shots were the major beneficiary to the Hotshot's stabilisation ability – an underrated feature for sure.

Another major benefit to using the handle during regular filming is the way you're able to 'pinch zoom' on the fly. Holding an iPhone completely still while rolling alongside a skater and zooming at the same time was a nigh impossible task before I got my hands on the Hotshot. I was able to steadily hold the grip one-handed while zooming with the touchscreen, without it ever feeling awkward or uncomfortable. This was another surprise benefit, and a technique I used prominently while filming the video above. 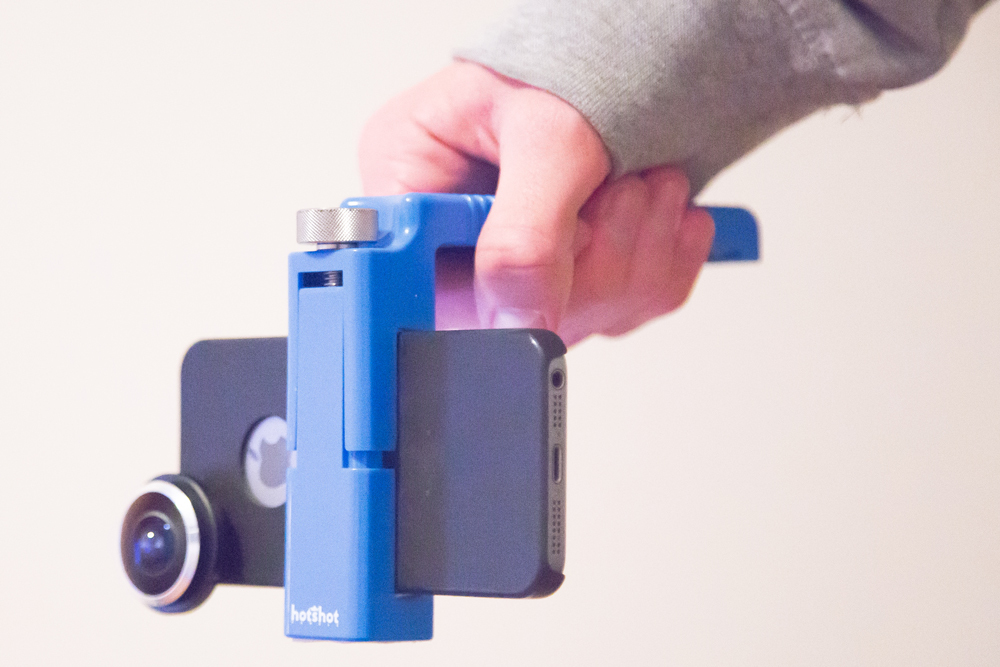 After using the Hotshot extensively while filming long-lens, I almost forgot that its primary use is usually as a fisheye handle. It works exactly as you'd expect, with the handle long enough to get low to the action without sacrificing stability. This makes the Hotshot Handle a perfect addition to the Death Lens fisheye, which I used during this review and in the Bato Yard video above. 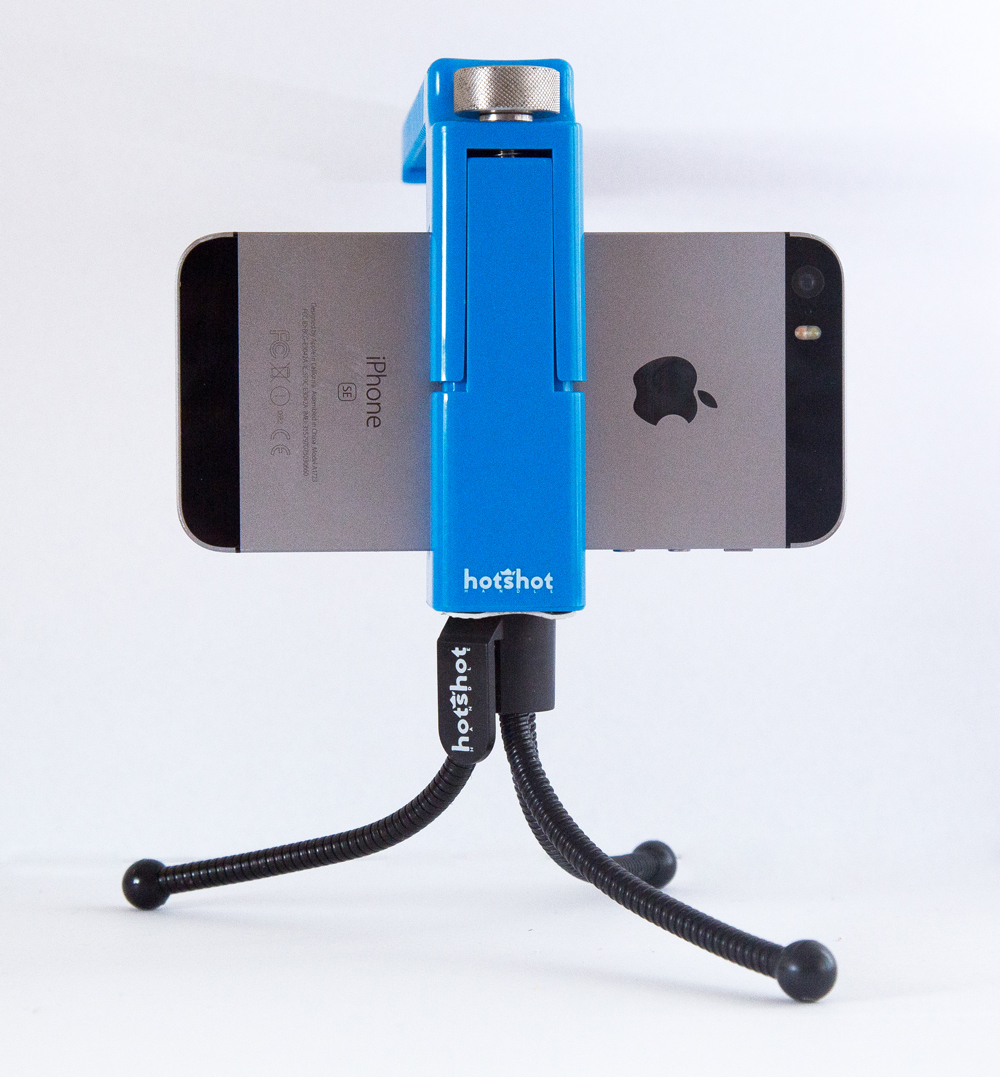 An often overlooked asset to the Hotshot is its universal tripod mount, which is situated conveniently on the bottom of the handle. If you're someone who often films themselves skating, this is an absolute godsend. It works perfectly with any tripod, from mini to massive, and has the potential to add another dimension to your photo and video work on a smartphone, even outside of skateboarding.

The time-lapses from the introduction of the Bato Yard video were filmed using a mini tripod attached to the Hotshot, and everything went without a hitch. While it's definitely not the major selling point of the product, it's most definitely an underrated bonus feature that'll probably save you plenty of time and frustration, along with adding some extra polish to your videos.

I was extremely surprised by the Hotshot Handle. For something that appears to be a flimsy piece of plastic at first glance, its ability to stabilise footage and aid smartphone filming can't be understated. Whether you're filming fisheye lines, rolling long-lens, time lapses or selfies, the Hotshot has every base covered. It's significantly cheaper than any gimbal on the market, and while you can't expect the absolute precision of an electronic gimbal, it does a standout job as a significantly cheaper alternative.

To cap it off, the Hotshot Handle was founded and developed by none other than Garrett Hill, along with his brother Gantry, so it's not just another product from a big-shot company trying to capitalise on the popularity of skateboarding. Garrett is a skater through-and-through, and if you need further convincing with regards to the Hotshot, just know that you're supporting a modern skate legend with every purchase. The product was clearly designed with skateboarding in mind, and it greatly exceeded all initial expectations I had. I'm backing it.

We enjoyed using the Hotshot Handle so much that we stocked up on them in the Boardworld Store, which you can feel free to browse. As always, we offer fast and free shipping Australia-wide, as well as member discounts on every product.

Taking iPhone footage to the next level

A comprehensive review of the latest iPhone filming accessory

A full part filmed entirely on an iPhone 5