I was lucky enough to test one of the early Now prototypes in Whistler a few seasons ago. The early prototypes were solely focussed on the innovative technology referred to as "Skate-Tech"—using principles seen in skateboard trucks. The hanger of the binding transfers energy directly onto the edges of the snowboard, and the kingpin increases this energy through leverage. The bushings under the bindings' contact points allow for subtle but effective shock absorption and energy distribution. This design completely takes the binding disc out of the equation, applying energy to exactly where it's needed—the edges—giving you increased board feel, turning performance, comfort, response, and pressure control. It was clear from my first ride; these bindings were something special. The Now IPO does not only offer game-changing technology, but the standard features are up there with the best on the market. I have been testing them with medium bushings. 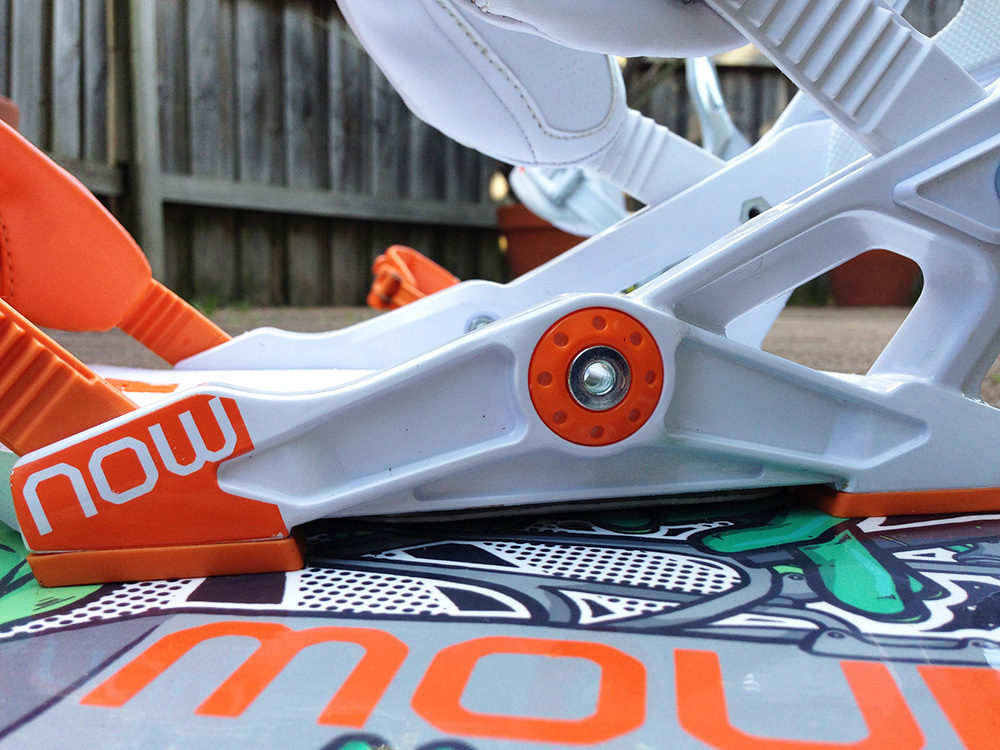 Side view showing the hanger, kingpin, and bushings

There are four main components to Now’s Skate-Tech: the hanger, the kingpin, the bushings, and the alumi-ring (and disc).

The hanger is basically the frame of the binding; it allows you to transfer energy from the binding down to the bushings and onto the edge of your snowboard, which is where we want it.

The kingpin sits in the middle of the hanger and acts as the pivot point or “fulcrum”—allowing the bindings to rock slightly from edge to edge, thus increasing energy to the edges through leverage.

Each binding sits on four rubber bushings, available in three different densities: soft, medium, and hard—which act as the contact points between the bindings and snowboard. They function in two ways. Firstly, they concentrate pressure onto the edge of the snowboard. Secondly, they act as a dampening or shock-absorbing system to decrease chatter for a smoother ride.

The binding disc sits on the “alumi-ring” which basically enables you to attach the binding to the snowboard. The alumi-ring hangs down from kingpins and allows for the rocking movement.

What all of this allows the binding to do is subtly rock backwards and forwards—from heel to toe and visa-versa—enabling concentration of energy to the edges when engaged, energy release after the turn, and full-time shock-absorption. The technology truly works and you will feel the difference from the first turn. The movement is subtle but effective and noticeable. What you have is a binding designed to work with you to turn the snowboard, unlike other bindings designed to just keep you attached to the snowboard.

When these bindings first hit the market, many people, including myself, suggested that the movement would sacrifice overall response, reducing edge-to-edge quickness. I was sceptical, to say the least. After thoroughly testing the bindings, and developing an understanding of how they work, I came to realise it was the complete opposite. Skate-Tech actually increases response. Let me explain it to you.

For example, when you’re carving and the toeside edge is engaged, the hanger pivots at the kingpin, the toeside bushings compress and increase direct pressure to the toeside edge. A couple of things are happening at this point. The increase in direct pressure to the edge gives you better control and stronger edge hold. Equally as important, the toeside bushings are compressing and building up energy. At the completion of the turn, the energy is released, powering you off the engaged edge and into the new turn. In the same way, a cambered board flexes during high-performance carving, loading up energy during the turn, releasing the energy at the completion of the turn and springing into the next turn—the bindings act in a very similar way.

This is where Now is taking things to the next level. Skate-Tech gives you:

The IPO is without a doubt the best snowboard bindings I have ever used and I won't be getting off them anytime soon.

The bindings are extremely comfortable, in part because you don't need to strap down so tightly to connect with your snowboard, but also because of the quality materials used in the ankle straps.

Too often I find ankle straps to be unnecessarily bulky, limiting ankle movement and reducing performance. The IPO ankle straps are perfectly shaped to my liking—holding where you need while allowing your ankles to flex freely. Certainly one of the best ankle straps I've ever used. 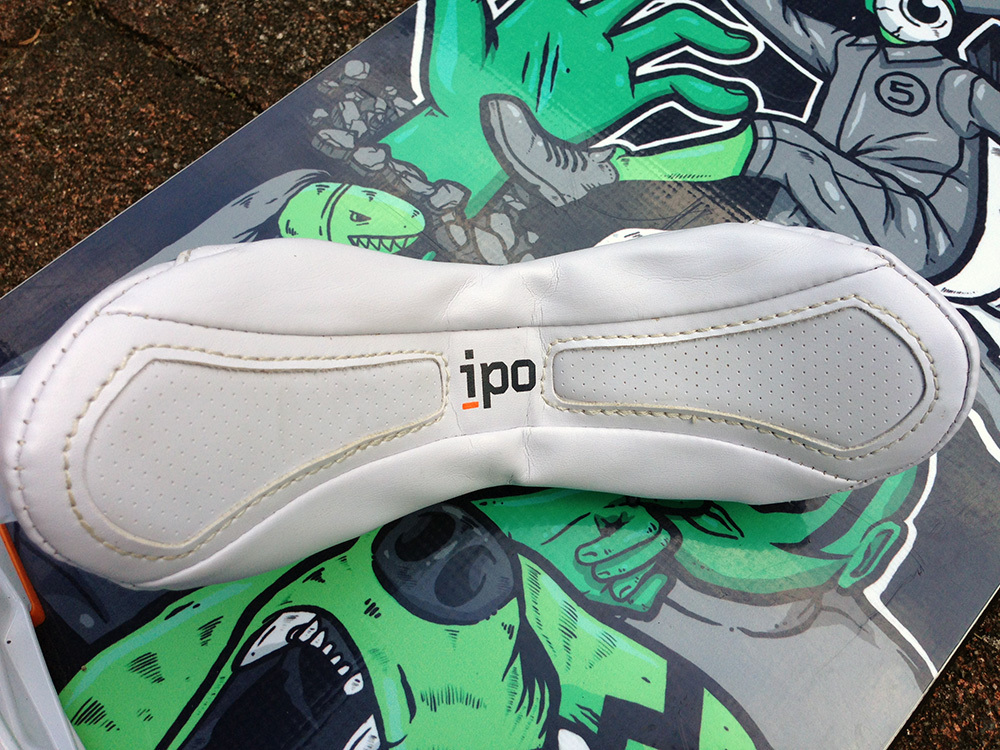 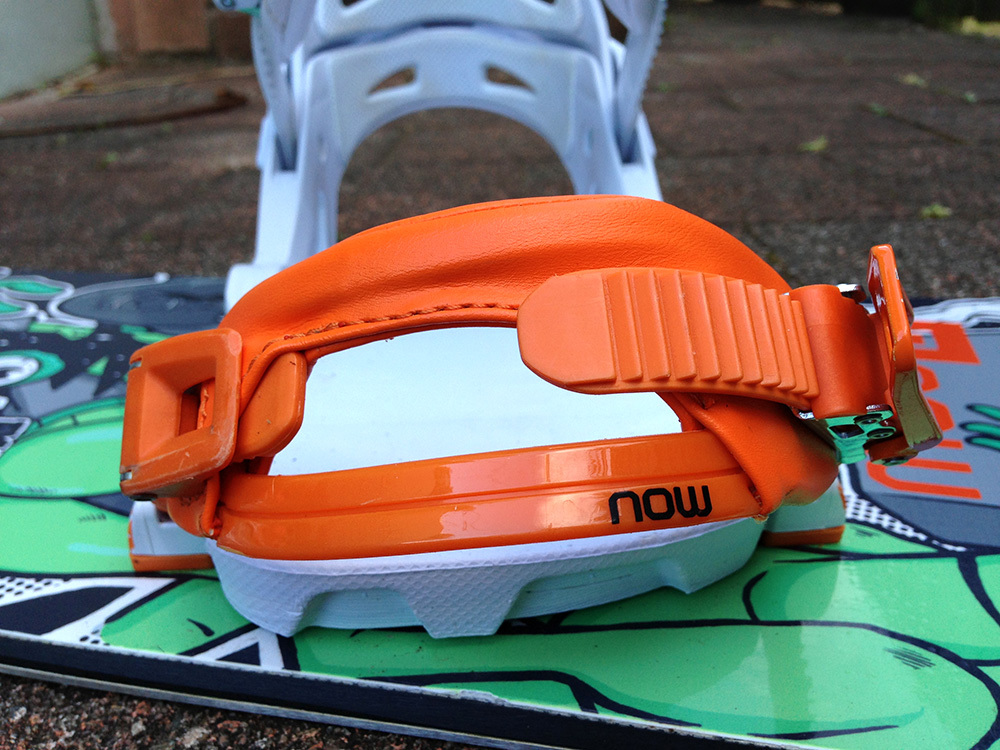 The buckles are high quality and allow for quick release, while the ladder on the other side of the strap offers quick, tool-free adjustment. One flick of the clip and you can easily slide the ladder into any position. 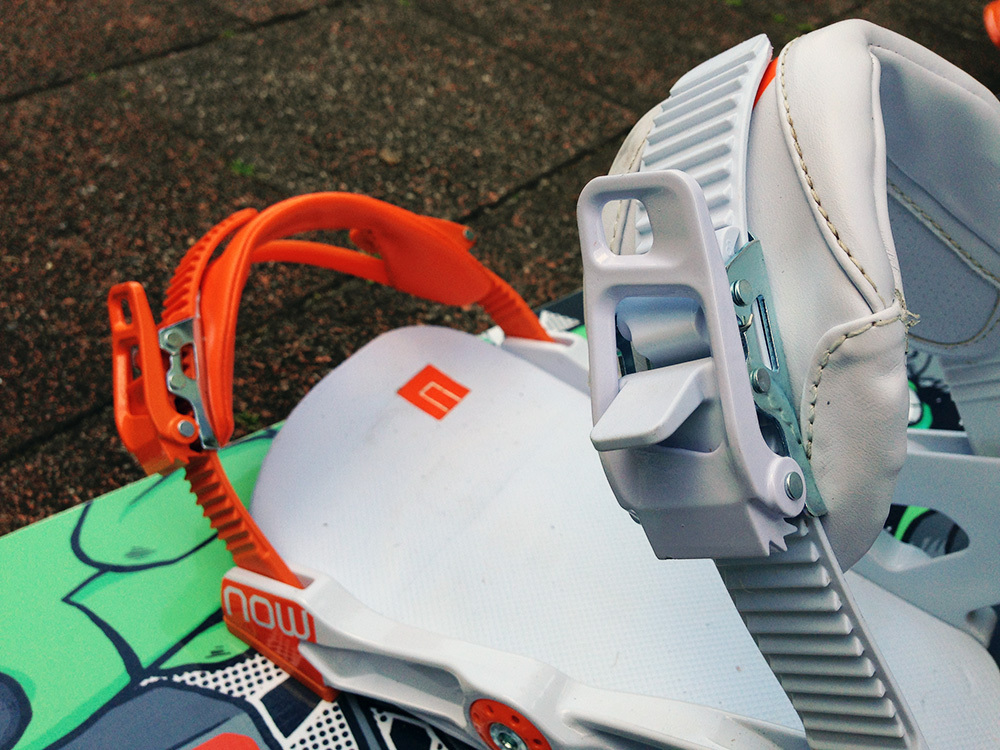 The forged aluminium base disc is strong and lightweight. The versatile disc allows for the bindings to be attached to every snowboard mounting pattern on the market: 4x4, 3D, and the channel—so you can benefit from these bindings regardless of which snowboard you're riding. 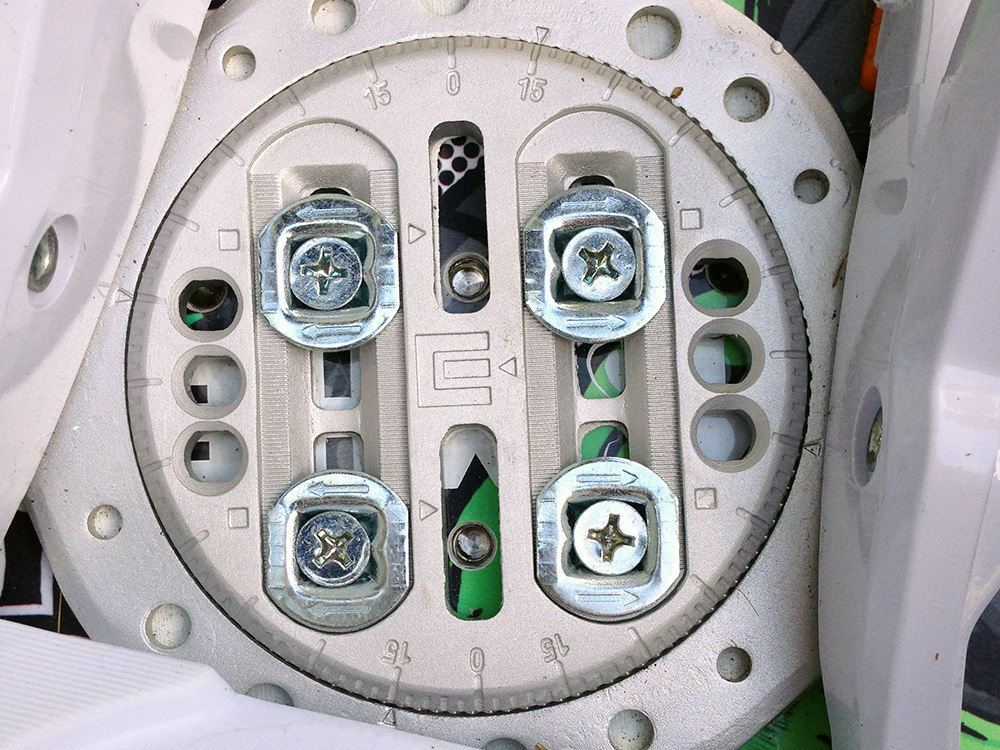 The low-profile EVA footbed is 15mm thick, providing shock absorption and increased board feel. Combined with the unique technology explain in this review, the footbeds feel great underfoot.

The heelcups are designed to give a snug fit and they sit flush with the highback. Heel lift between boot and binding is completely eliminated.

The highback is minimal but provides more than adequate support. The "Flex Hinge" dampens chatter and lessens calf bite. The tool-free highback adjustment is fast and easy to use. 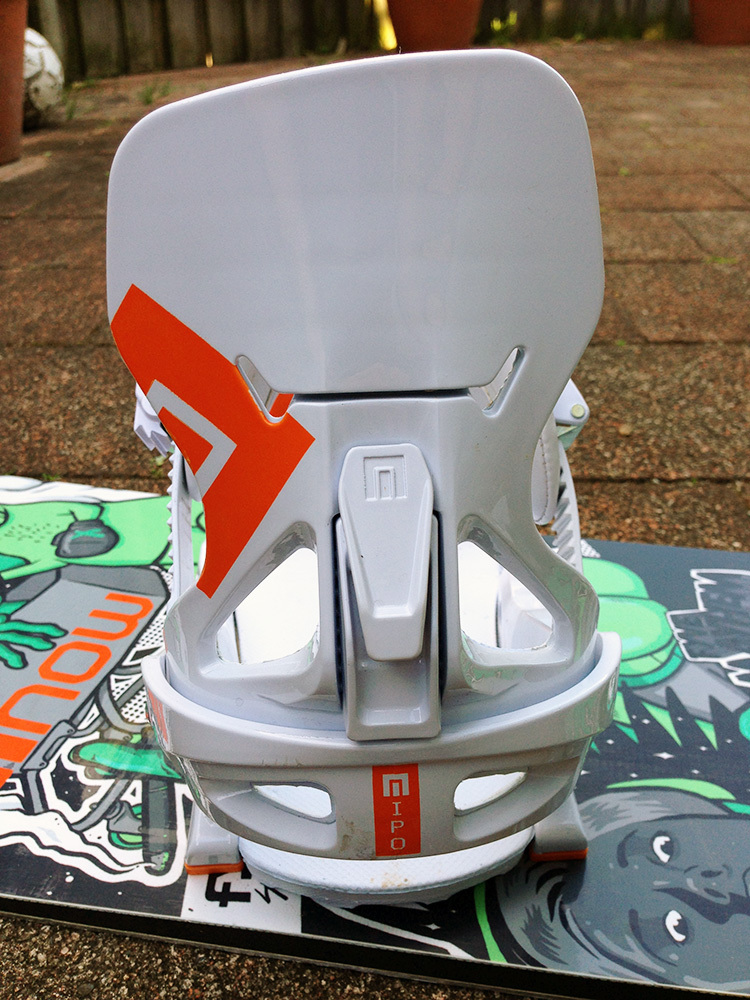 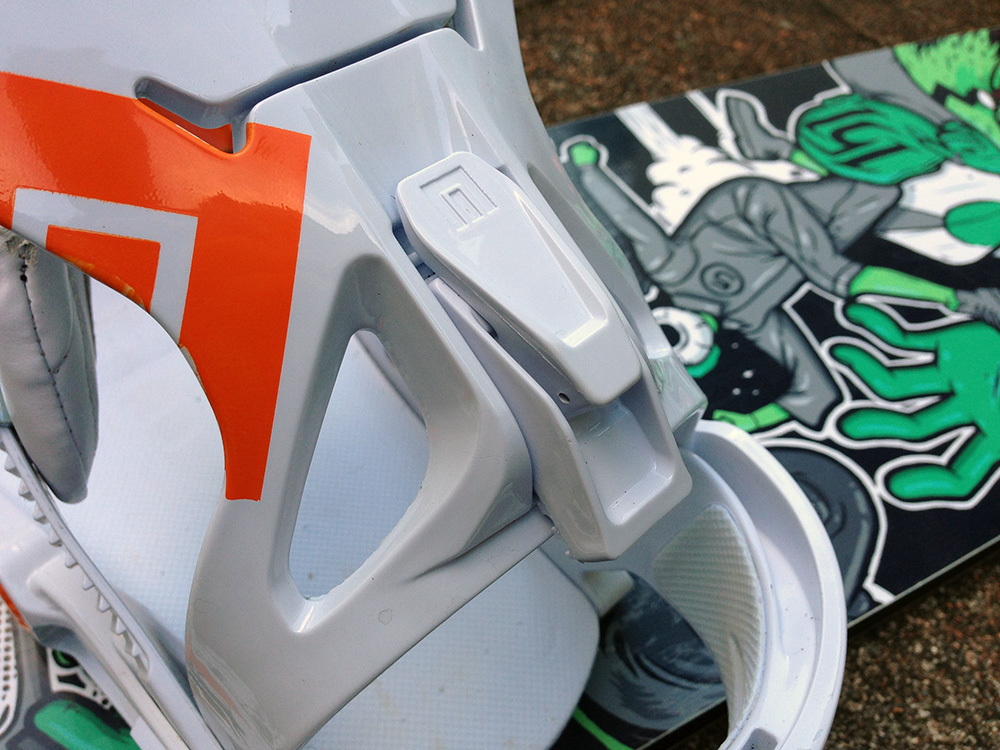 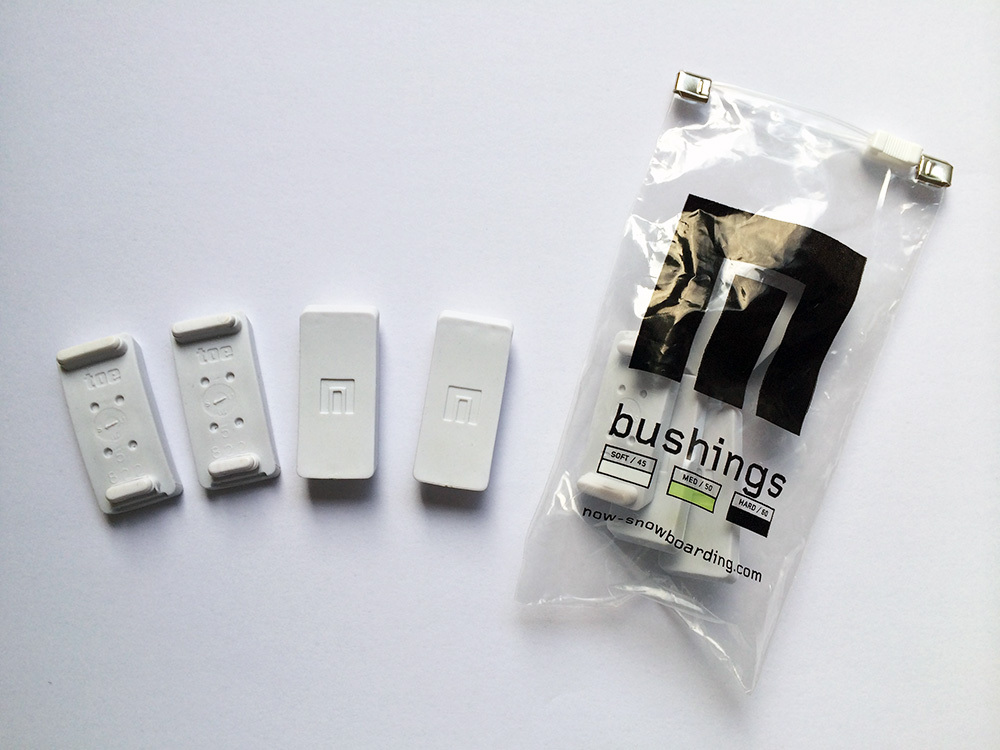 As you can tell, I'm really stoked on Now's IPO model. These bindings are easily one of the best value bindings on the market. The IPO is full of features and comes in comes in at a very competitive price. You’ll find it almost impossible to beat the performance of these bindings at their price point. The IPO comes with two different bushing: medium and soft—allowing you to customise the response and feel. I found them to be a nice mix or performance and playfulness; they felt great on piste, in the park, and in powder. I feel the IPO would work very well for the majority of snowboarders. If you want something more aggressive, have a look at the Now Drive which has a taller and stiffer highback and also comes with hard bushings.

Here are a couple of testimonials from two snowboarding legends:

“I’ve ridden a lot of bindings over the years. From baseless to the top sellers and have never experienced a binding like this! It makes you one with your board, giving you ultimate control but allowing you to have lots of manoeuvrability to still tweak tricks. I personally love how little play there is between your feet and the board. My binding and board feel like one solid unit instead of my binding flexing all over and feeling sloppy.” — Devun Walsh

“From my first run on Now bindings, I knew that going back to traditional bindings was not an option. I felt an increase in power to the edges, a decrease in chatter, and completely eliminated foot cramping because I no longer had to crank on my binding straps to feel connected to my board. Finally, there is a binding that has taken the four hole disc out of the equation and the power is being transferred to the edge properly.” — Jeremy Jones (Big Mountain)

BOARDWORLD is currently offering a full range of Now Bindings. Please get in touch with us if there's anything we can help you with.

Now Bindings come with a lifetime warranty on all hangers and alumi-rings.

With DCP at Whistler Blackcomb