Is This the End of Martin Place?

Australia's most iconic skate spot could be headed for the chopping block, with the recent confirmation that constructing Sydney's long-awaited metro system will involve the excavation and remodelling of Martin Place.

The news might come as a shock to many Sydneysiders, but the immediate future of the spot looks relatively safe. While the north-western segment of the rail system is set to open as early as 2018, it could be as far as 2024 before the Martin Place metro station is in full operation. The city plaza, famous for its wide variety of spots – from ledges to rails, stairs, benches, fountains, and variations of just about everything – has become arguably Australia's most iconic skate destination since it was last refurbished in the late 1990s. 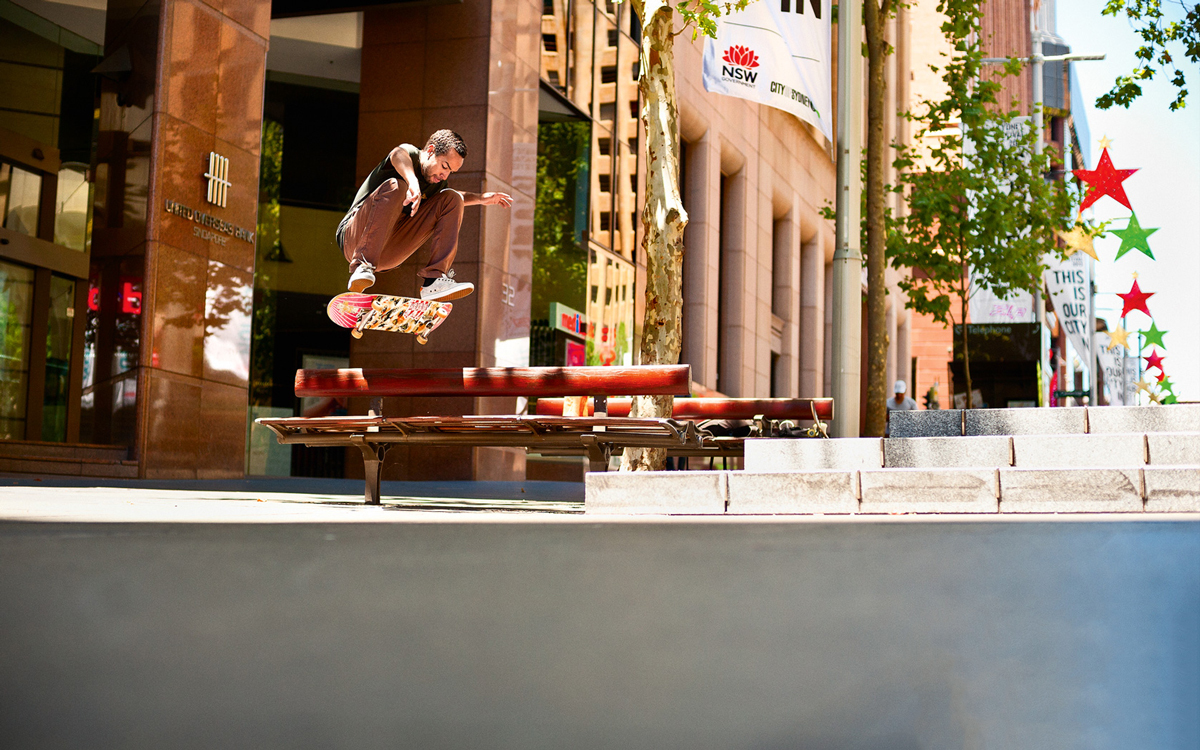 “Martin Place will become a major interchange [on the new metro system], where passengers can switch between lines to travel on different parts of the network. It will transform the way people get around the city and connect to other parts of Sydney", according to the Sydney Metro website.

While the lower portion of Martin Place looks set to be cleared, including the area featuring the famous "pit" and line of 3-stairs, it's unknown what effect the construction might have on the upper area of the plaza.

With plenty of appearances from some of skateboarding's all-time best, we figured this was a good chance to look back on some classic parts featuring Martin Place since its modernisation ahead of the 2000 Olympic Games. We obviously can't list them all, but these are some classic parts and tricks that spring immediately to mind whenever Martin Place is discussed. Let's take a look.

Chris Cole's ending part in New Blood was, and probably still is, considered one of the best parts in skateboarding history. Along with featuring a massive amount of footage from Down Under, Cole absolutely slays every inch of Martin Place, from the top stairs through to the pit. His backside 360 kickflip down the mammoth 4-block is forever etched into skate folklore, while his lines involving the top benches set the standard for Martin Place skateboarding over the following decade. Chris came, saw, and conquered Australia's best spot.

If you're familiar with Marc Johnson's parts in Yeah Right and Fully Flared – and let's face it, as a skateboarder, you should be – then you probably recall his brief yet memorable cameos on the line of 3-stairs at Martin Place. With just one line in each part, MJ managed to re-invigorate an often overlooked part of the spot, rattling off two extremely impressive and stylish sequences down all three of the sets. You'll find them at the 1:19 mark in Yeah Right and at 3:25 in Fully Flared.

This isn't really a proper part, but Chima has been tearing down this spot since he was knee high to a grasshopper, so it's impossible to pick one. Thankfully, legendary Sydney skate filmer Su Young Choi dropped a compilation of Chima's very best Martin Place footage from over the years, and it's a hell of a good watch. Look out for some classic cameos from Dustin Dollin, Sammy Winter and Shane Cross, too.

Tony Tave's perfect nollie 360 flip down the 4-block was as flawless and memorable as they come, and while it's the only Martin Place footage he had in this part, it's certainly a stand-out. Tony bagged the last part in This Is My Element, certainly no mean feat, and was touted as potentially becoming one of skateboarding's all-time greats. While he never quite lived up to the potential, that perfect nollie tre will always be remembered by Sydneysiders and Aussies alike. You'll find it at 0:47 in the video above.

Sammy Baca's insane intro trick in Baker Has a Deathwish is definitely some of the most memorable Martin Place footage of all time. While most skaters stick to the classic spots (and who could blame them), Sammy went in search of something new, and came up with a gnarly drop-in to slappy grind on the far edge of the plaza. After rolling away from the trick the first time, much to the delight of some local lasses, Sammy quickly ran back to the top and nailed the trick as perfectly as you could imagine. If you've ever been to Martin Place, you'll know exactly how gnarly this is. And if you haven't, now is probably the time – you might not have much longer.

The End of Lincoln Square

One of Australia's best skate spots has been torn to shreds...literally

Chris Cole: Welcome to Plan B

A look back at Chima's decade with Real Skateboards