Cruising along the Great Wall and more

China has undoubtedly become the go-to international destination for skateboarders worldwide. It’s cheap, it’s fun, and it’s got the best skate spots in the world – how could we say no? Before we knew it, we’d rounded up 12 skaters, filmers and photographers, and we were lost in the world of endless marble, delicious dumplings and children defecating on the city streets. Ah…heaven.

Plenty of shenanigans went down on the trip, and these stories are but a small, light-hearted snippet of the endless fun we had during our 4 week stay. If you’re wondering whether or not the Chinese hype train is real, stop right now and go buy a ticket. It’s probably the best decision you’ll ever make. Or maybe the worst. Just don’t blame me if you wake up in an ice bath and notice your kidneys are missing. 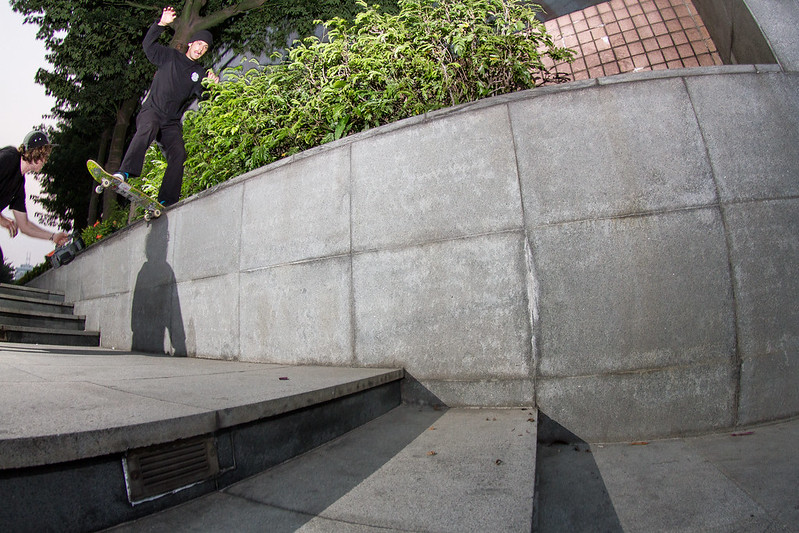 While skateboarding is beginning to take off in China, it’s still a very confusing pastime for the majority of security guards, who are usually clueless as to what these weird westerners are doing. When Milan went to try this tailside, a slew of about 5 or 6 security guards came flying out of nowhere to stop us from skating. Thankfully, as the bunch of tremendously handsome and profoundly intelligent folk we are, a few of us decided to pretend we wanted to scale the building around the corner. 5 or 6 of us, pretending to be totally confused, attempting to climb a flat 10-storey wall, totally unassisted. Imagine it. This stroke of genius lured the entourage of confused security guards away, and Milan was high fiving the crew in no time. Aussies 1, Chinese 0. 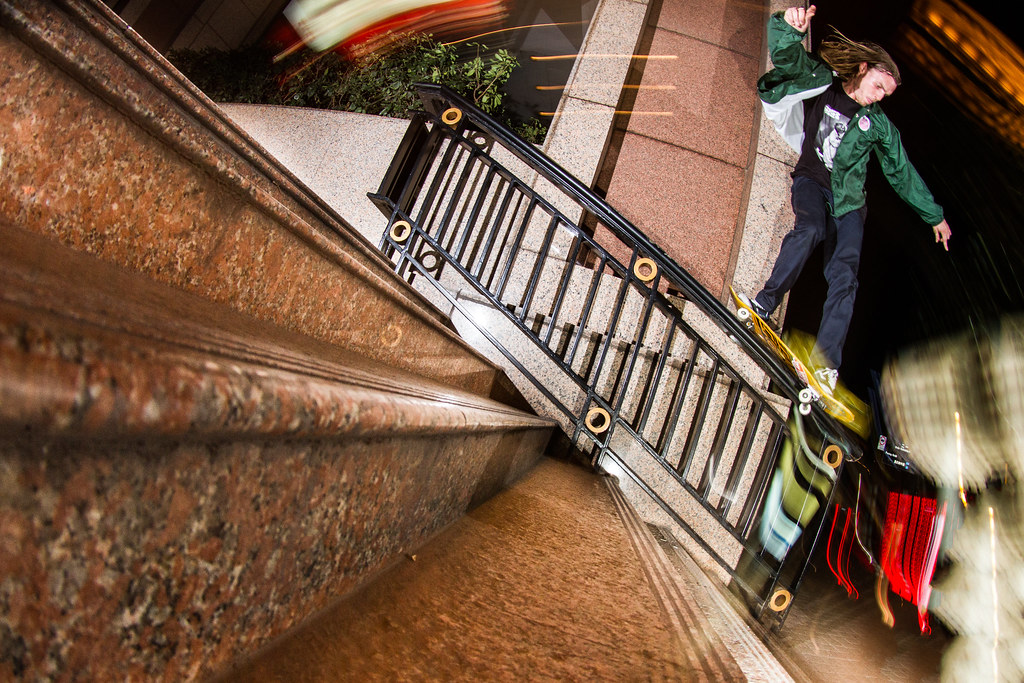 Tommy Breaks was the MVP of the trip – just ask him, he’ll tell you all about it. This rail in Shanghai is definitely no joke, and the back smith is an incredible trick – massive props. Night skating in Shanghai was one of the most unbelievable experiences of my life. It’s the world’s most populated city, and it’s the best skate city in China by a country mile – you’re proper blowing it if you leave Shanghai off your Chinese itinerary. The sheer size and scale of the city is overwhelming. This trick earned Tommy about a week in the MVP room, and a couple of banana massages from the parlor up the road. 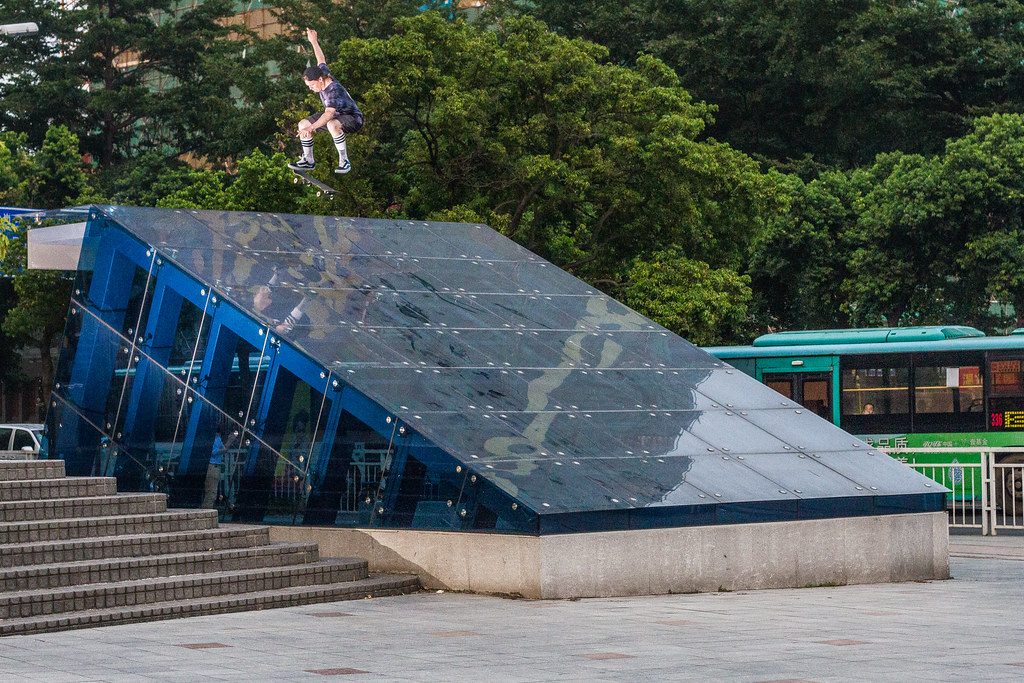 This was another one of Tommy’s sudden bouts of spontaneous “throw myself off this and see what happens”. This kickflip is straight up stupid – I could barely run to the top of this glass ramp without breaking a bone. The funny thing about China is that, although they are interested in skateboarding and often stop to watch, sometimes the locals pay no attention to the absurdity going on. People in China tend to mind their own business, and not many stopped to watch this trick go down. I guess you become somewhat desensitized to it all when there’s people whipping giant spinning tops in the streets, or dangling their young child over the sidewalk while they take a shit, or riding motorbikes up staircases and straight into the apartment lobby like it’s nothing unusual. Tommy nailed this kickflip third or fourth try, and we were on our way. Nothing to see here. 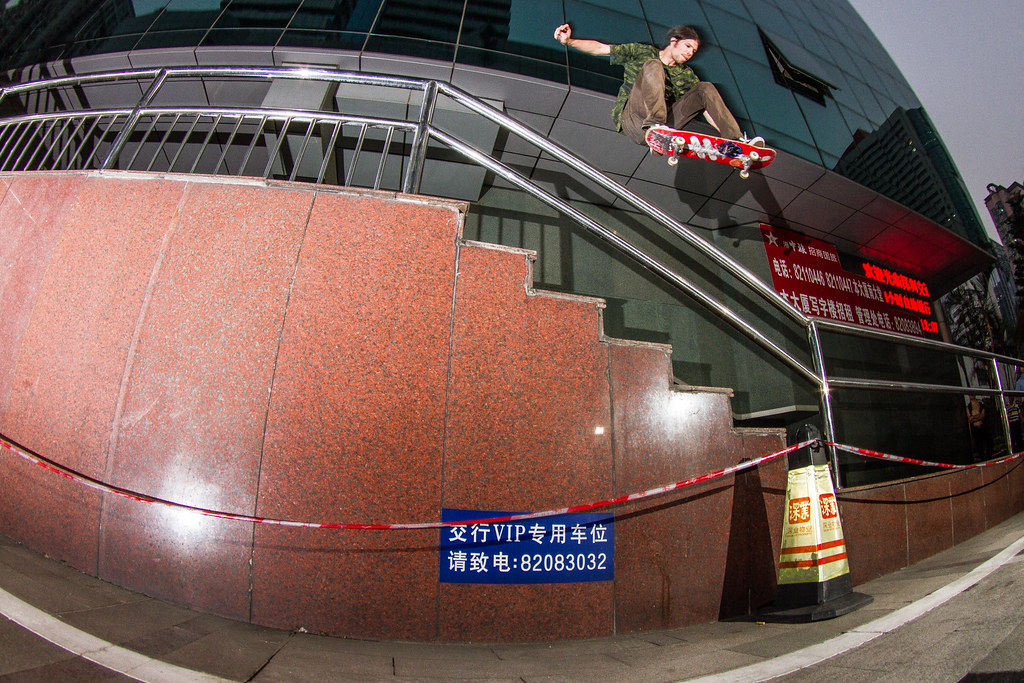 We’d been in China for about a week by this stage, and we’d made our way to Shenzhen. This over-rail was stacked with people heading to and from the train station after work. It didn’t bother Crowey though, and he hucked out this heavy ollie much to the delight of passersby. It was immediately afterwards when the real hammers went down – the discovery of 7-11’s Breezer drinks. I guess they have these in Australia too, but for about 50c each, we were hooked. A bunch of sweaty skaters hanging around drinking fruity alcopop drinks was pretty badass if you ask me. “Gettin’ breezy” quickly became a common phrase throughout the trip. “You coming skating today” would get a response of “nah, I’m getting breezy”. You can’t make this shit up. We’re the coolest people in the world, I swear. 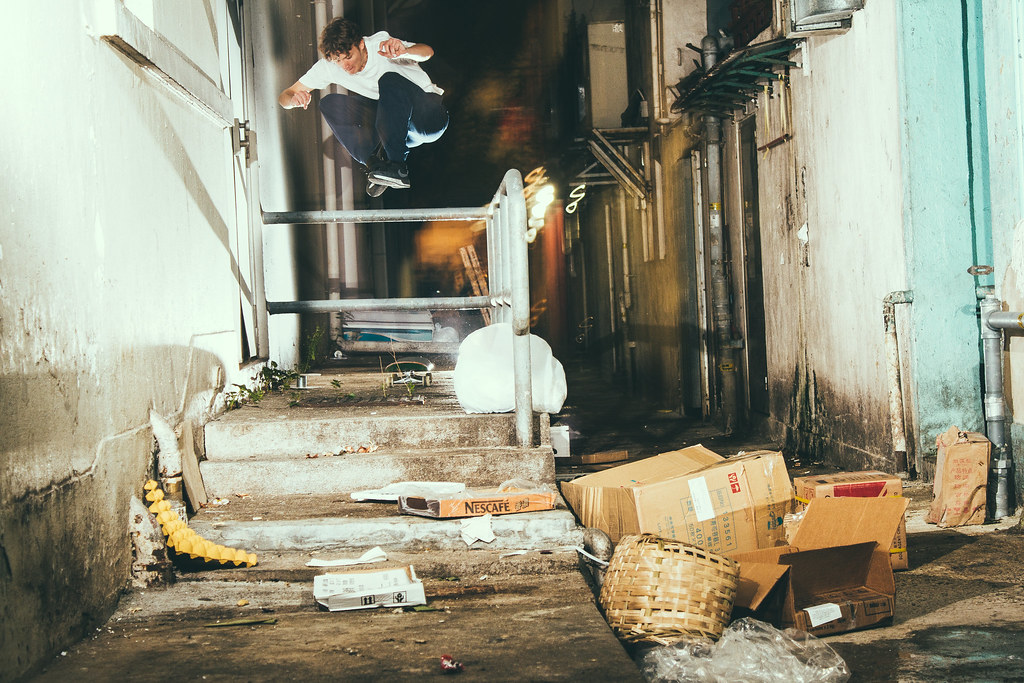 Corey’s hippie jump went down on our very last night in China – down in Hong Kong, actually. Corey and I were sussing out some dark alleys when we stumbled upon this. We agreed it’d be cool for a photo…but the stench was unbelievable. They were cutting up fish and other sea animals down there in the alley. We went in, quickly nailed a cute little hippie jump photo and got out of there ASAP, while the seafood samurais stared us down with a glare that could kill a man. Hong Kong is definitely an interesting city. A couple of nights earlier we’d made the national news and papers for trying to take our push bikes onto a train…but that’s a whole other story. 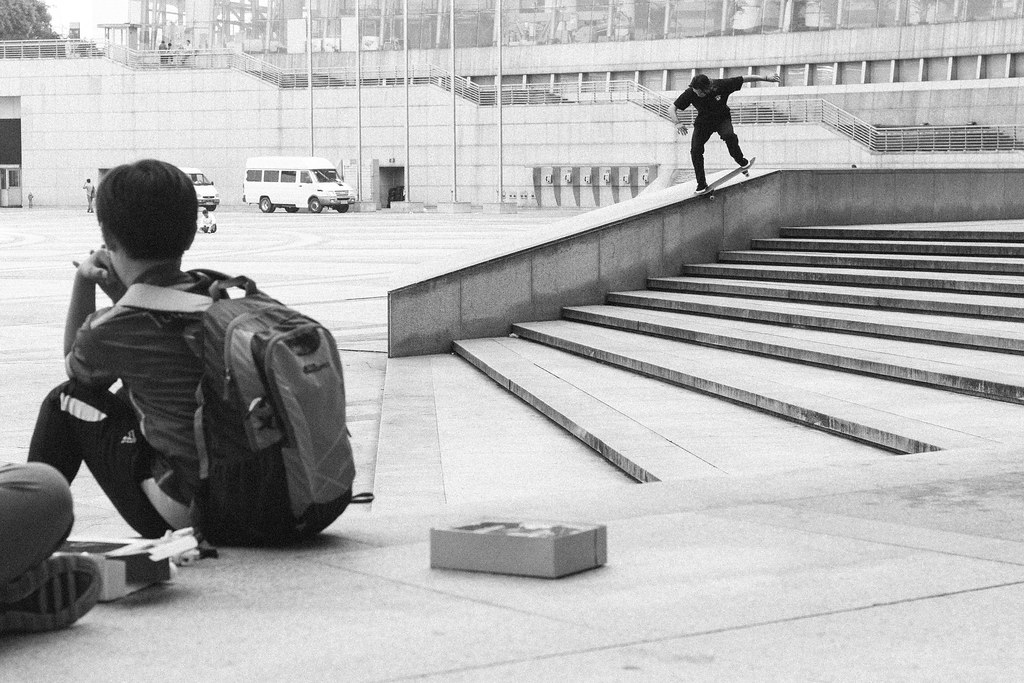 This long hubba is a pretty well-known spot in Shanghai, and it’s at another one of those ridiculous gigantic marble plazas that seems like it was designed to be skated. Something that’s less well-known is that the spot is located right across from a gigantic underground marketplace – the kind where you haggle for Beats by Dre ripoffs and fake football kits. Milan was the only guy ballsy enough to try something down this thing, and I’m glad he did, because we had the time of our life in the markets while he toiled away. Corey and I ended up getting lost in there and didn’t see anyone until the next day – the place is a maze, built into old subway tunnels. We lost all contact. We haggled the shit out of the shopkeepers all day and night, and ended up with an entire new wardrobe of clothes, head to toe, a ton of new electronic goodies and a few remote controlled helicopters. Wait, was this meant to be a skate trip? 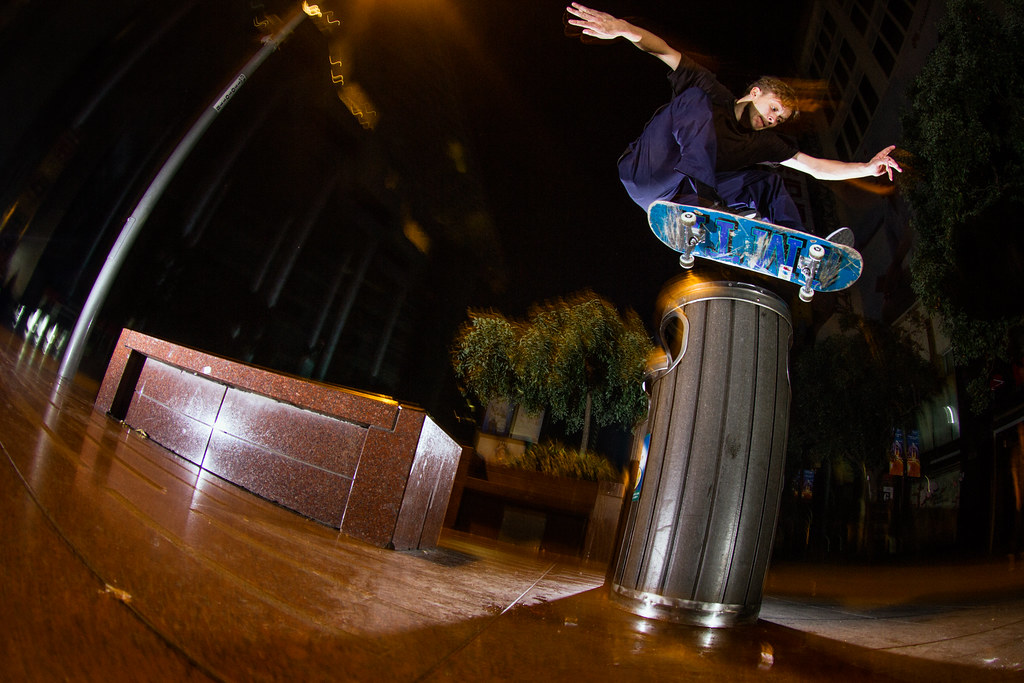 This trick probably looks kind of simple, but take a closer look. This was a quick ollie onto a skinny bit of marble, and an even quicker ollie over the trashcan. Only Corey could pull this one off - and he did, many many times, because I kept screwing up the photo. In my defense, I’d been swarmed by a large group of locals, who kept taking my board and spinning the wheels with caveman-like reactions. Skateboards are a primitive concept to them. They ride around on segways without handlebars and that’s totally normal, but skateboards are a fucking trip out. Makes sense. This is why I love China. 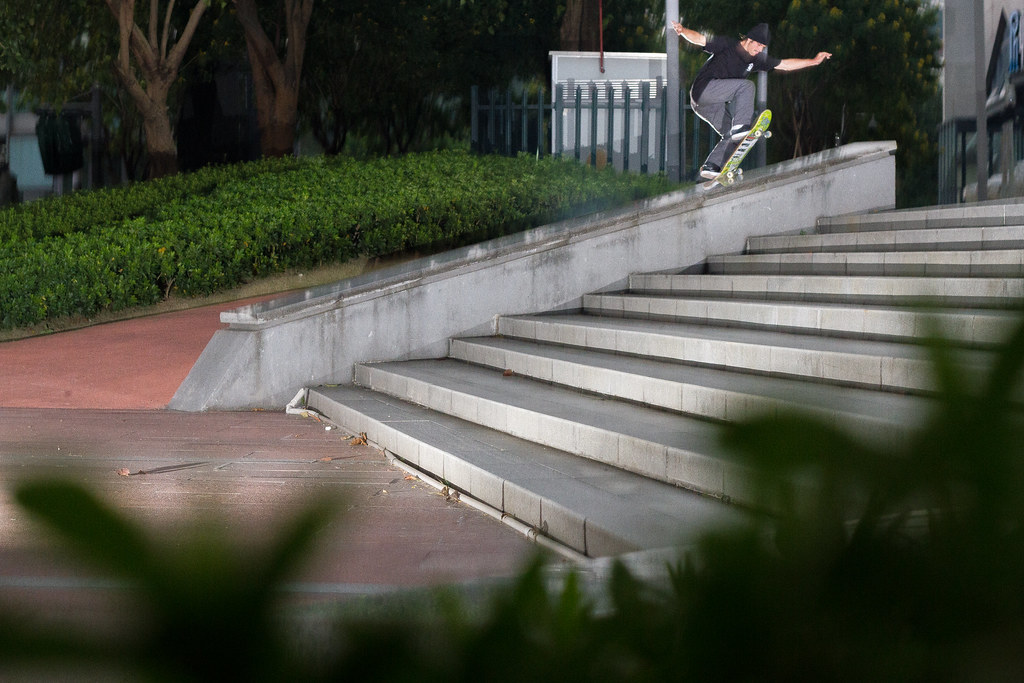 I'm going to be totally upfront here — Milan didn't roll away from this front blunt. But I had to include it here, because it's the absolute gnarliest/coolest/funniest thing I've ever witnessed with my own eyes. Sit back and imagine Milan slowly bluntsliding his way down this enormous hubba in Guangzhou...it's the stuff of legends. This plaza spot is probably one of the world's best for skateboarding — hubbas and ledges of every size, out-ledges, wheelchair ramps, handrails, perfect ground and you never get kicked out. It's practically heaven. You might be second guessing a trip to China, turned off by the fact that "everyone goes there now", but if you're too cool for fun then you probably shouldn't be skateboarding. This spot, and China as a whole, is an absolute blast. 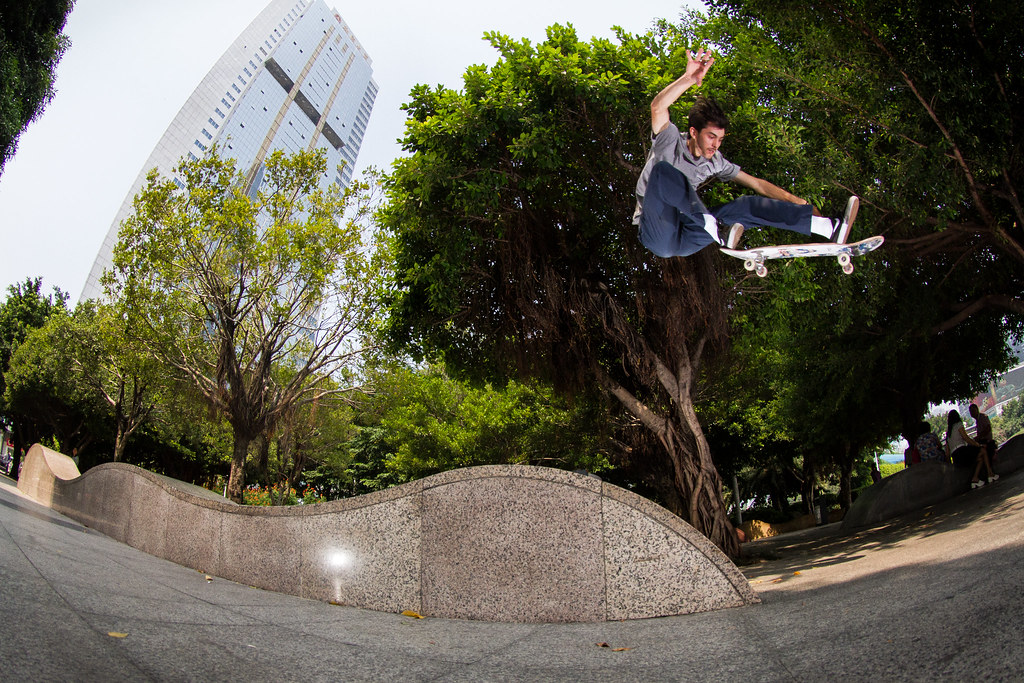 Did I mention the spots in China are really fun? You've almost definitely seen this spot before, and skating here had been a dream of mine for a good while. We'd booked a hotel right across the road from here, so this was the warm up, warm down and middle-of-the-day chill spot for the duration of our time in Shenzhen. The morning that Michael threw down this kickflip, we actually ran into a young Chinese kid with a skateboard, who came over to say hello. He was riding a board with plastic sides that lit up with lights, what appeared to be wooden trucks, and a completely snapped kick on one end. He didn't speak a word of English, but the sheer happiness he exhibited while watching us skate is the type of thing you'll never forget. Definitely one of the coolest moments on the trip. Michael has the world's best kickflip too, so it made for a nice photo. 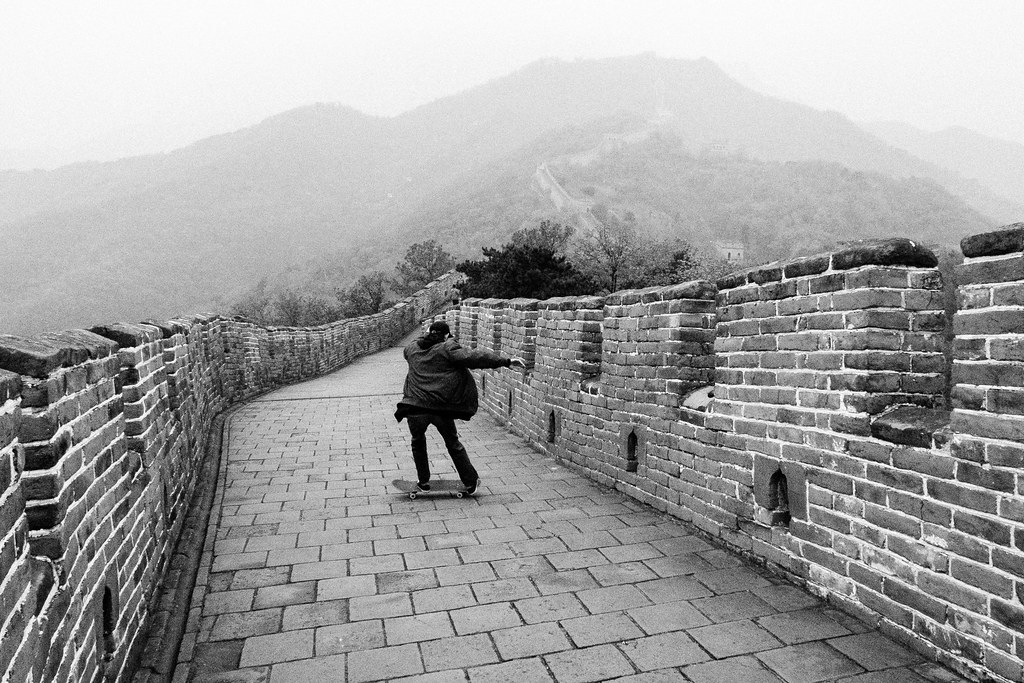 Michael Powerslides on the Great Wall

It’s not too often you get to visit one of the wonders of the world, let alone skate on top of it. Skateboarding on the Great Wall of China was probably the highlight of the trip, and one of the highlights of our lives. Myself, Mike, Corey and Milan made the trip out there (via a taxi, which cost us about $40AU and he waited in the car park in town for 8 hours while we visited!), took the ski lift up there, skateboards in hand, and began trying to kickflip on an ancient wall. It’s a bit weird when you put it that way…we got one or two bemused looks, that’s for sure. 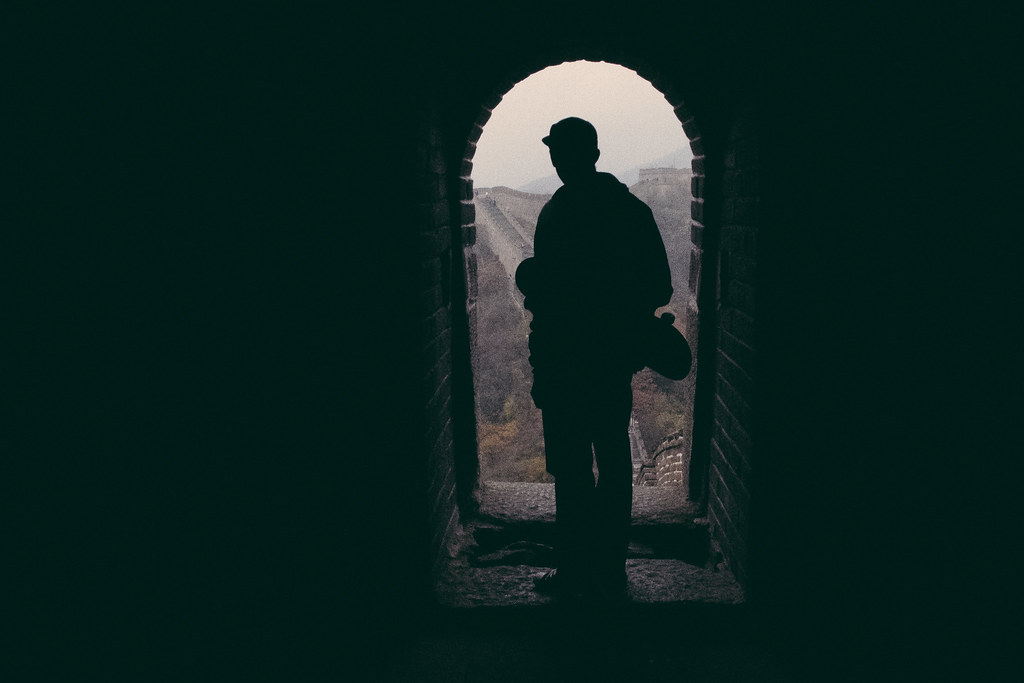 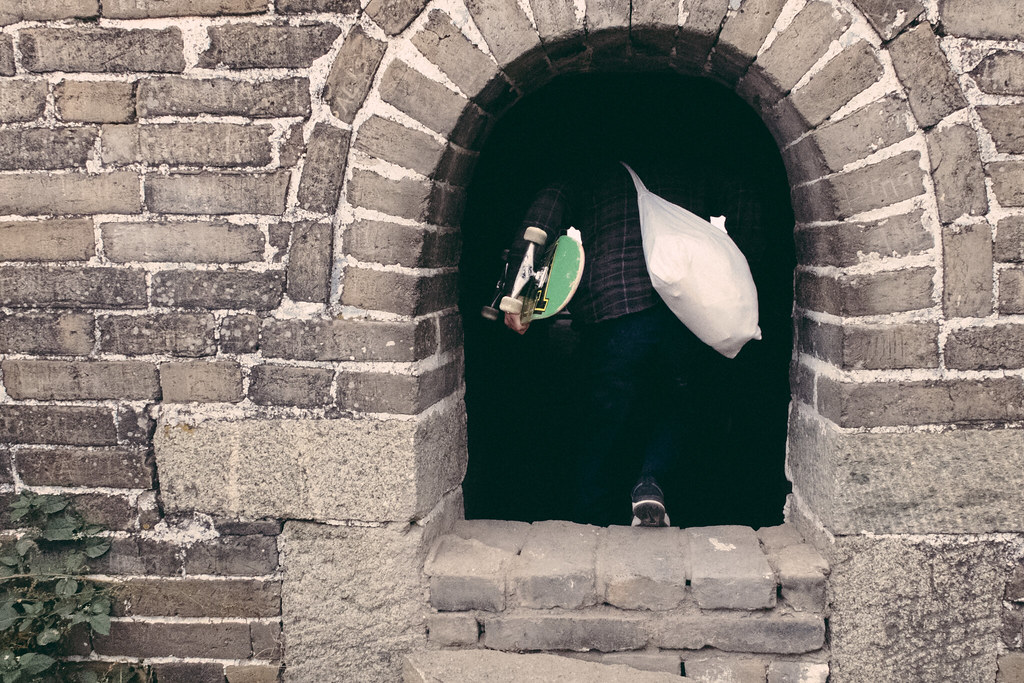 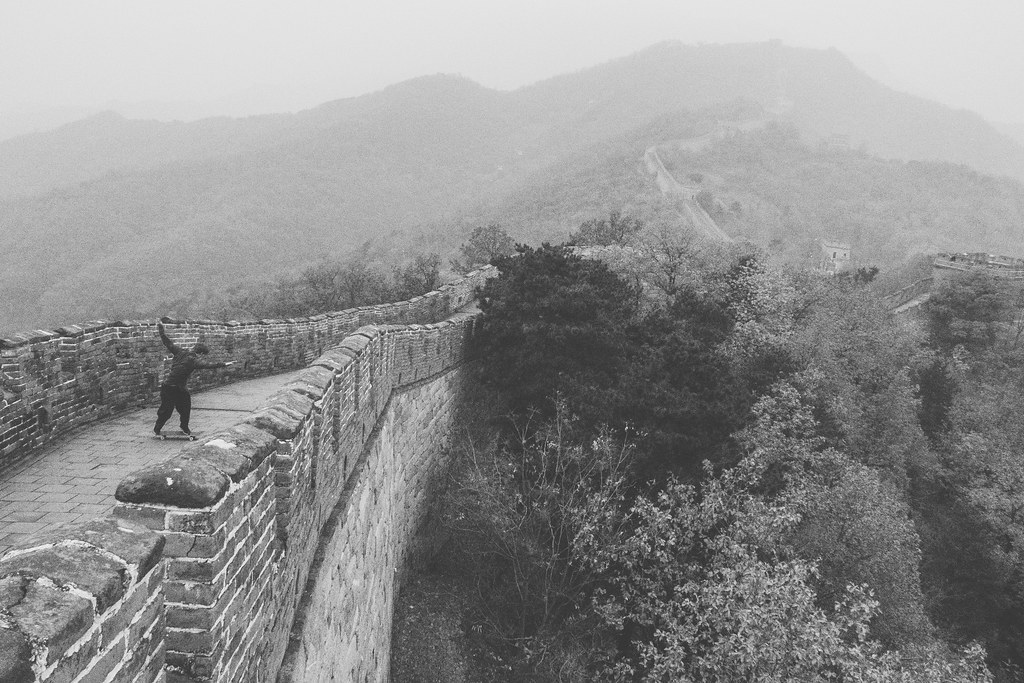 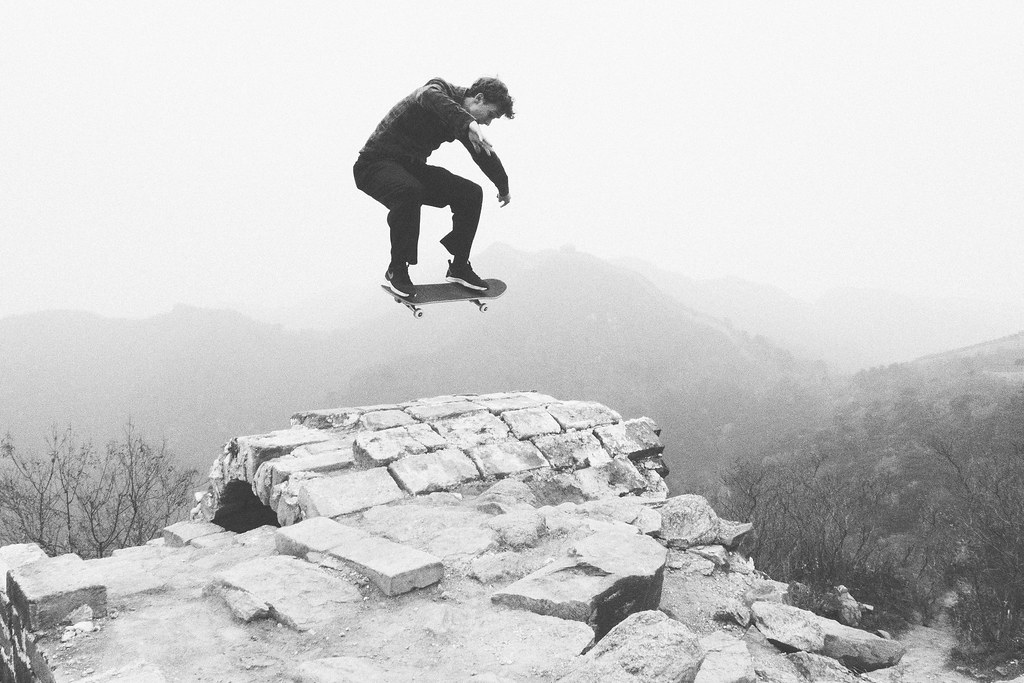 We were lucky enough to end up at a pretty much deserted part of the wall, where a lot of it was naturally overgrown and resembled something from Indiana Jones more than a classic postcard. I can’t recommend getting off the beaten path enough. With this experience under our belt, we were back on a 24-hour train to Hong Kong, and jetted home from there. What a weird world.

Behind the Glass: Hong Kong

A sacred spot and the session of a lifetime

With Barletta, Cairo, Carlin and the team