Behind the Glass: Hong Kong

A sacred spot and the session of a lifetime 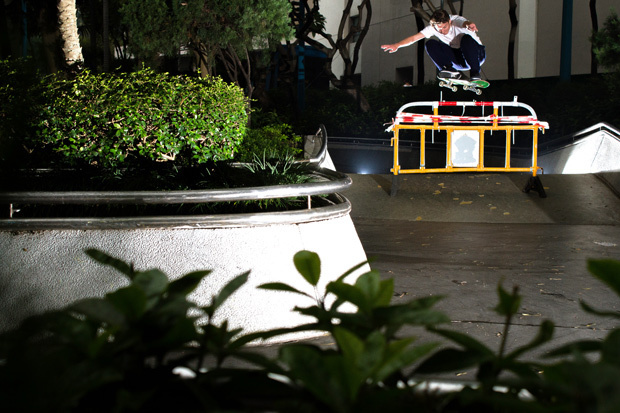 To those unaware, this bike track in Hong Kong is something of a sacred spot in the skateboarding universe. It's one of those dreamy, unreal spots that doesn't feel like it actually exists in the real world. You've seen it in the videos, magazines, commercials and on social media every day for years; you've seen the Kostons, Carrolls, Coles and O'Neills lap around it's perfect surface; the rails and banks are marked with relics of the best skateboarders the world has ever seen. It isn't until you actually lay eyes upon the spot, however, that it all becomes real. It's a strange and awesome experience. And, as I've learnt over the last few years, there's no better sight to a skateboarder than that of a sacred spot.

Yeah, skateboarding does weird things to you.

It's funny to think that something so simple can hold so much passion and meaning. This is a bike track designed for kids to ride around on their bicycles and play in the park next door, yet skateboarders have turned it into a temple. We'd travelled to the opposite side of the world just to get a glimpse at these tracks, handrails, ledges and banked surfaces. To an outsider, it's absolutely absurd — half of our crew on this China trip opted to skip the Great Wall in order to hang around in Shanghai and hunt for spots a little longer. We'd rather gaze at a certain 16-stair handrail in Hollywood than visit the Hollywood sign or Ripley's Museum; we'd rather spend the night dodging bums around a dinky park in Philadelphia than visit the Liberty Bell, and so on. These are our tourist attractions. Like I said, skateboarding does weird things to you.

With that being said, you can imagine what it felt like to skate around the corner and lay eyes on Hong Kong's most skated relic. While some would find a magic moment in their first glimpse of the Taj Mahal, we similarly held that sense of pure excitement and awe upon stumbling across this sacred combination of concrete and metal. And believe me, the spot lives up to the hype. Skating here was one of the funnest experiences I've had in my life, even if it simply involved pumping over the banks and carving around the turns. Similarly, having the opportunity to shoot photos here was incredibly fun and rewarding. Snapping photos at a spot you've seen in every magazine ever is exciting, no matter what trick or obstacle you're shooting, and it was certainly the case here. As is natural for any skateboarder, though, I wanted to mix things up just a little.

For those unaware, Hong Kong is a jungle of construction — there's workers on every corner, huddled under bamboo scaffolding and digging ditches in the side of the road all day and night. Unsurprisingly, this means there's a ton of barriers and traffic cones left in all corners of the city, which meant we could use them to our advantage here. A quick hop of the fence and some teamwork led us to an old construction barrier, which we decided to use to our advantage at the bike track, as you can see. It was quickly set up in front of one of the spot's mellow banks, and Corey began blasting the ollie you see here. It was awesome to add something extra to the spot, as others had done before us, and to me it sums up skateboarders perfectly. We're always looking for that extra creative challenge and looking to add thay DIY touch to any spot, even the best in the world. A couple of clicks later, Corey had rolled away from a monster ollie, laughing his head off as we high fived and let the good times sink in. It's not every day you get to shoot a photo at a spot like this.

As for the photo itself, I tried to keep things simple. I was nestled away in a garden, 50mm lens attached, with four flashes (two behind, one front right of Corey, one further back front left) as I aimed to cancel out most of the uneven natural light that had been sprayed everywhere by the tree cover above. It's nothing too special or unique photo wise, but to shoot a photo here was an awesome experience, and something simple felt like the best option to run with.

We left the spot with a sense of accomplishment and that buzzing excitement that comes at the end of an awesome session. To us, we'd just had one of the most memorable experiences of our life, and it involved riding around on a plank of wood and wheels on a children's bike track. Skateboarding does weird things to you.

This session took place on the last day of our month-long trip around China, where we found ourselves awe-struck by unbelievable spots on a regular basis. Truth be told, it was a perfect end to the funnest skate trip I've ever been a part of. I'll be posting up a couple of articles covering more unbelievable spots in Southern China, namely in the cities of Shenzhen and Guangzhou, in the near future. Stay tuned for those.