In any other event, Johanne Defay's gritty underdog victory would have been the news on everyone's lips. And while the French youngster's triumph over a red-hot Carissa Moore in Fiji's tensely fought final is certainly nothing to glance over, it was another underdog who stole the headlines.

The story of 26-year-old Bethany Hamilton is well-known; she lost her right arm in a shark attack at the age of 13, and a promising professional surfing career seemed, at the time, to be over before it began. As it turned out, Bethany's determination and bravery in the face of the accident were nothing short of superhuman, and she was remarkably back in the water and chasing her dreams shortly after the attack. As Bethany left the water following her semi-final loss to Defay this morning, you'd be hard pressed to find a happier person on Earth.

Hamilton's road to a 3rd place finish in Fiji was of the highest calibre – a round 2 win against world number 1 Tyler Wright was followed by a heat-topping performance against 6-time world champion Stephanie Gilmore and the eventual winner, Johanne Defay. A quarter-final win against in-form Aussie Nikki Van Dijk followed, before her dream run was ended by a dominant Defay in the semi-final.

"She's the greatest human probably ever," Wright said of Hamilton, following her round 2 exit.

After gaining a wildcard entry into the event, it was the sixth time Hamilton had contested a world championship tour contest, but this was comfortably her best result.

The World Surf League themselves summed up Bethany's achievement in a way that can't be topped, writing:

"Bethany Hamilton is surfing with one arm. Paddling through waves, to waves, and into waves is supposed to be impossible with a disadvantage like that. And pushing to your feet while dropping into hollow reef waves? Forget about it. It's really not possible. She just refuses to believe it. And her storybook determination makes her the embodiment of the world's best motivational speech."


While Hamilton's superhuman performance was rightly lauded as the highlight of an action-packed event, Defay's win over Carissa Moore in the final has upped the ante on an already closely fought title race. Defay moves into 4th place overall with the victory, while Courtney Conlogue has pipped Tyler Wright to head the leaderboard before July's US Open of Surfing in California. Moore sits in 3rd spot, with barely 3000 points seperating her from the top, as it shapes up to be an epic contest for the world title.

No Australians reached the semi-finals in Fiji, with Sally Fitzgibbons, Laura Enever and Van Dijk all eliminated in the quarters.

Hamilton's wildcard performance means that she'll likely be invited to future events this season, and is oods-on to compete in the US Open, where Defay is the defending champion.

"Even after losing my arm, I am still doing everything I've hoped I could do with my future and even more," Hamilton said following the event.

"I think I am a reminder for the young girls that they can do it if they set their mind to it." 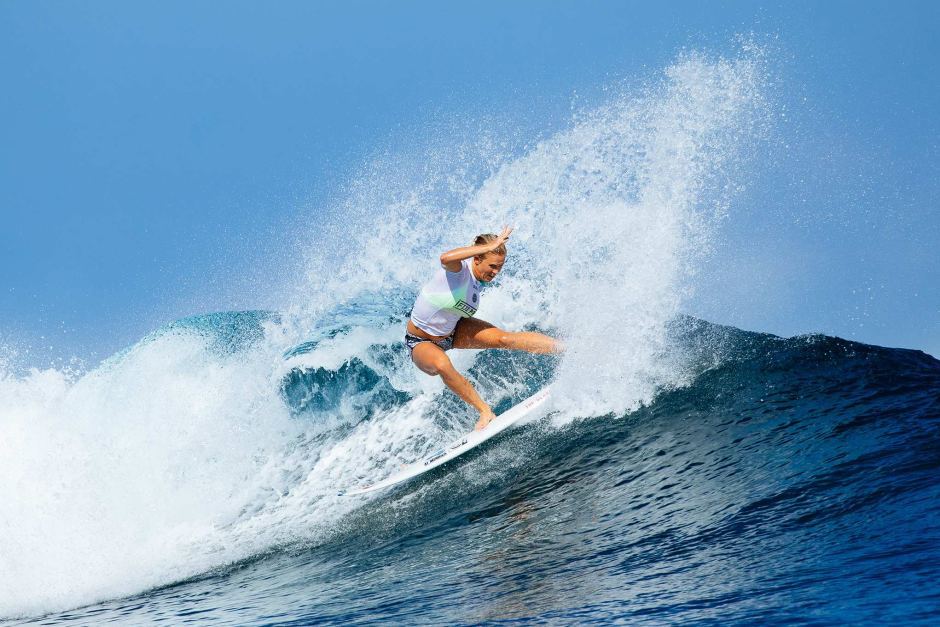 All the highlights from the final day in Fiji

Bethany Hamilton Explains How She Surfs with One Arm

Bethany explains how she surfs with one arm