An in-depth review by Riely Walker 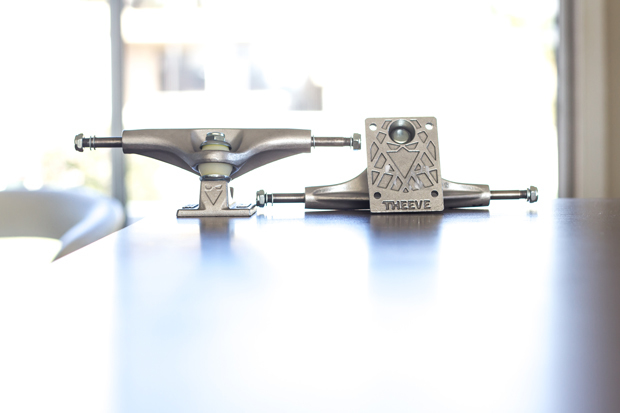 After a lengthy and rewarding spell riding Independent Trucks, I recently decided to mix things up and dive into a pair of newly listed Theeve TiAX trucks from the Boardworld Store. There has always been a certain buzz floating around these particular Theeve trucks, and a considerable amount of scepticism has been directed towards them over the last few years. Theeve is currently shipping the third version of the TiAX trucks, which you'll find at the Boardworld store, so I figured it was time to see if they had ironed out the kinks and delivered a truck that was up to the standard I had become accustomed to with Indys. Without any doubt, I was in for a surprise.

First of all, I have to be honest – these aren't the first pair of Theeve trucks I have tried out. I picked up a pair of the company's original trucks back when it burst onto the scene, which I rode for somewhere around 6 months before swapping back over to Independent. The ones I used back then, however, were vastly different to the TiAX model, and were more-or-less a generic truck that left me feeling like Theeve's were “nothing special”. It turns out things have certainly changed since then.

The first thing you'll notice when you pick up a pair of Theeve TiAX trucks is the weight – these bad boys are light. I'm not sure of the specifics, but they're noticeably lighter than the Indys I've been riding for the past two years. Upon closer inspection, there's no doubting as to why the trucks are lighter. The axle itself is surprisingly much thinner than any other truck I've seen on the market, and it's almost as if half of the truck has been carved out and thrown away in order to lighten things up. Secondly, the axle itself is made (at least partly) from titanium, a super light but strong metal that you'll find in golf clubs and similar equipment. Like any skateboarder, I was immediately sceptical about the weight of the trucks, especially after setting them up on my board. My doubts were quickly squashed. 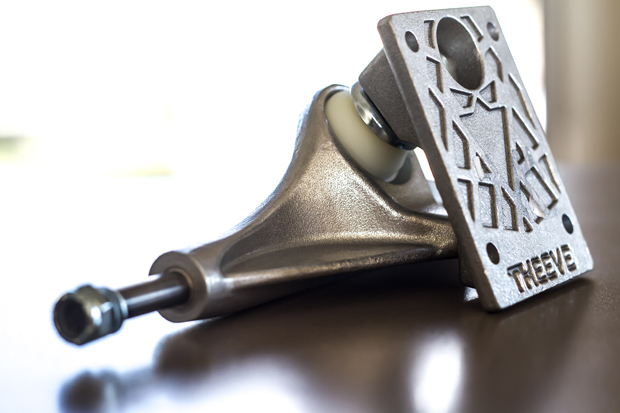 The reinforced titanium axle has a unique shape, and it does the job. These are the lightest trucks I've ever used.

The reality is that the weight of the trucks is as close to perfect as I've felt. The importance of your trucks in doing flip tricks and other non-grinding tricks is often overlooked, but the weight and “feel” of your board is often defined by those heaving pieces of metal underneath. I had absolutely no dramas with my flip tricks and flatground skating while using the trucks, and I can safely say that the light weight of the trucks is a completely positive thing. As always with new trucks, shoes or boards, new products will take a bit of getting used to before you can nail tricks as normal, and these trucks are no different. Is the lighter weight a huge advantage? Not particularly. But it's certainly not a disadvantage, and heavy trucks might very well be the reason you can't perfect those nollie tres or varial heelflips.

Now, moving on to the juicy stuff – grinds. Lets face it, this is what trucks are most important for these days, and the Theeve TiAX models do a bloody good job at it. I'd heard all of the stories about them grinding poorly, or sliding out, or whatever else, and I can definitely put those claims to rest. The stuff I skated ranged from perfectly coped skatepark ledges to crusty concrete blocks, and the Theeves came up trumps on everything. I'm not sure if it's the titanium in the axle or the unique shape of the trucks themselves, but grinding on coping felt even nicer than it does on Independent trucks. Like any skater, this is a pretty big deal to me. There's nothing like busting out a nice simple frontside 5-0 grind on a quarterpipe, and the Theeve's have a certain smooth feel that keeps me jumping back onto my board and dropping in again. They genuinely grind longer, and aren't prone to sliding out like some of the older models became known to do. It feels strange to say it, but these trucks feel better to grind than Indys. Plain and simple. 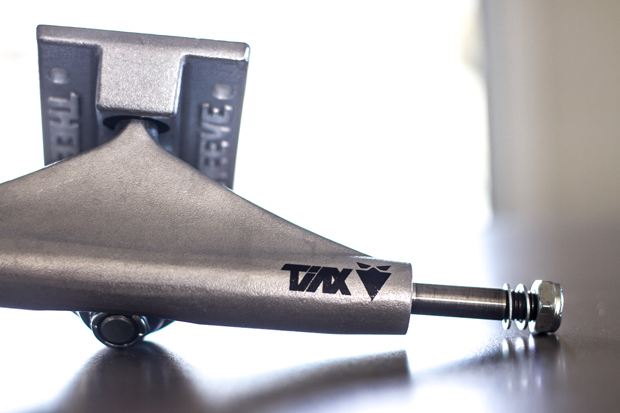 These are the third version of the TiAX model, and the axle is tough as guts. A little too resistant, I'd say, but they grind like a dream.

I had roughly two months with the trucks before writing this review, and I made sure to have enough time to wear in some grooves before putting my thoughts in writing. Again, it could be the composition of the trucks, but these things took a little longer to wear in than most trucks tend to do. Forging grooves into your trucks is important because it makes it a whole lot easier to lock into grinds, especially if you're skating a less-than-perfect ledge or rail. The TiAX trucks, however, seemed to remain pretty well unblemished throughout my time with them. It's obviously down to personal preference on this point – do you like longer lasting trucks, or would you prefer trucks that forge a groove earlier on? I'd like trucks that give me that solid groove to work with as soon as I start throwing crooked grinds at my local ledge, but that's just me. I skated the trucks long enough to get my groove going and it was ultimately a rewarding experience. Like I said earlier, these things are an absolute pleasure to grind, and that holds true regardless of whether or not they're heavily worn in. But are they a pleasure to turn and carve with?

To put things bluntly: nothing will ever compare to Independent trucks when it comes to turning. It's that simple. The Theeves are, however, a worthy opponent when it comes to turning and carving your way around the parks and streets. The first thing I noticed about turning on the trucks, however, was that the bushings seemed pretty stiff – this is nothing unusual on a new pair of trucks, but after a couple of weeks the bushings still seemed pretty hard, and this didn't change no matter what kind of tinkering I did. I ride my trucks fairly loose, so I probably put the bushings under more pressure than somebody who is riding tight and tic-tac-ing their way around. Even so, they just seemed to retain that “new truck” feel after numerous sessions in both the parks and streets. This is more of a personal preference than anything, as I like to ride my trucks loose and therefore prefer softer bushings. It just feels like the medium Bones bushings used by the Theeve trucks aren't up to the flexible standard I've become used to with Independent's medium bushings. In saying that, the Theeve TiAX trucks were more than capable of getting me around the park or down a hill, and the bushing problem pretty much only reared its head when I took to transitions and the odd bowl or two. You can of course change the bushings to suit your needs, which I may do in the future, and as relatively inexpensive items this isn't too much of a problem. 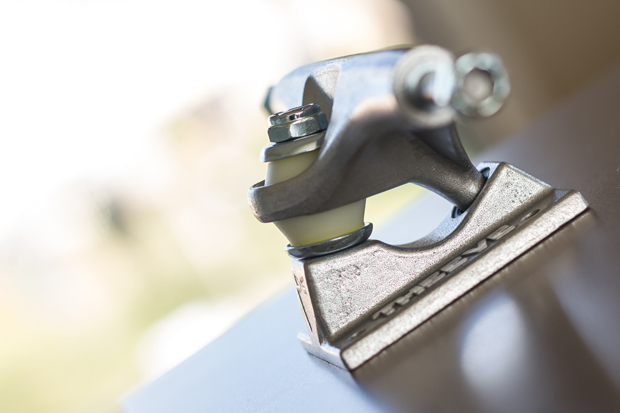 The notoriously fidgety bushings have given me do dramas in terms of becoming displaced, but the default Bones bushings are a little on the hard side.

There's also been a lot of talk in skate circles about the Theeve bushings “popping out” on the TiAX model, but I must admit that during my 2 months spent with the trucks so far I've had absolutely no problems on that front. From what I can tell, the problem has been all but eradicated since the third version of the TiAX model was released. I will, however, edit this article in the future if I run into any problems, as it's been a big enough issue in the past to warrant a warning if it does occur in the trucks I'm using. Once again, I've had no unusual problems with the bushings popping out or becoming restless during my first two months with the trucks, and I think it's fair to say that the Bones bushings currently being used have been heavily improved in order to remain intact under all sorts of pressure. I've found them to be capable of turning and carving soundly, without being anything too special.

The Theeve TiAX trucks were a definite surprise to me, especially with all of the rumours that have constantly dogged the brand pretty much since its inception. Most, if not all of them, I have found to be completely false. They feel better than Indys to grind, they're lighter than any truck I've used before yet remain very controllable while flipping your board, and they seem to have held up remarkably well despite heavy usage over the past two months. They aren't for everyone, though, and they may not replace the Indys I've grown to love. Are they worth a shot? Absolutely. Go ahead, mix things up. At the end of the day you'll have a ton of fun with the Theeve TiAX trucks no matter what, and even if they don't end up as your favourite truck afterwards, you'll still be glad you gave them a go. I know I am, and I'll continue to ride them until they're completely unusable. There's just that special something about these trucks that makes them feel unique, and I like it. 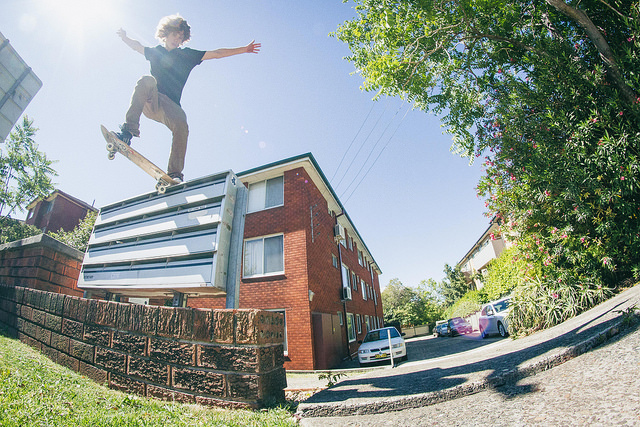