Are they really better than Bones STFs?

The Spitfire Formula Four has been available for a quick minute now, and we've all heard what “game-changing” technology is apparently crammed into these rounded blocks of urethane. They skate faster, they're easier to control, they're more durable, and they last longer than Bones STF — their direct competitor. At least that's what Spitfire claims, and it's what Spitfire fanboys have been shouting from the hills since these things hit the market sometime in late 2013. But are the Formula Fours really a smash hit? Do they actually blow the tried-and-true Bones STF out of the park? I figured it was time I investigated the wheels myself, and the answers aren't as clear-cut as I first imagined. 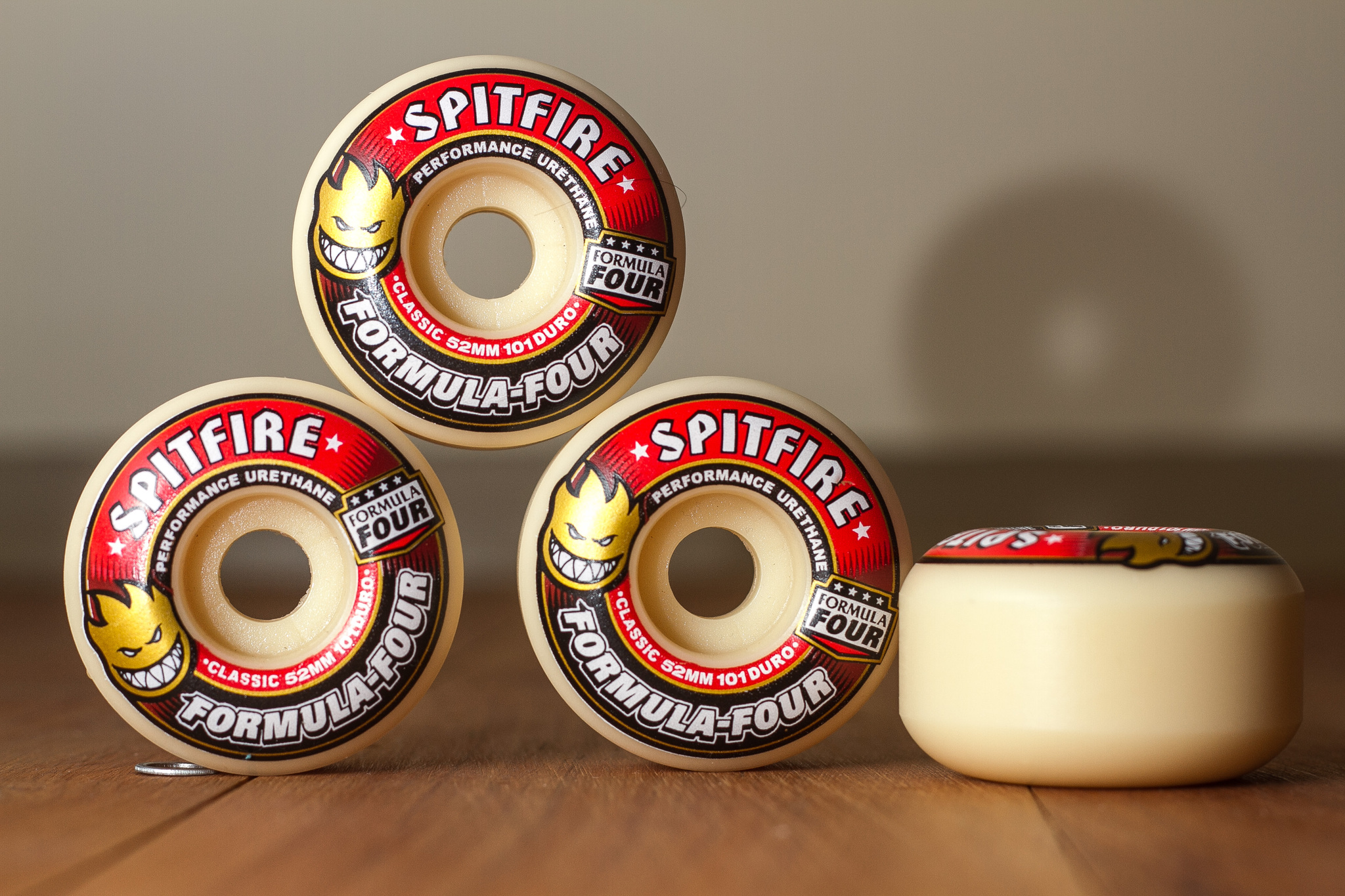 First of all, I'll be upfront — I've been a Bones man for years. The STFs have been my go-to wheel choice without much thought of switching, and even when the Formula Four hit the market with all the buzz and hype of a blockbuster film, I stuck to what I knew was good. In saying that, I'll always look at another product with an open mind, and I was super excited to finally give the Spitfires a whirl.

To somebody unfamiliar with wheel jargon, 101d and 99d are probably completely foreign terms. Even if you've been skating for a while, it's entirely possible that you've never come into contact or had to worry about this number, but it's a pretty important identifier. Basically, the durometer of a wheel determines how hard it is. The lower the number, the softer the wheel. That's the basic gist of it, anyway. If you've ever skated both hard and soft wheels then you'll know how that hardness effects the wheel in other ways, in terms of grip, speed, and so on. If you haven't, then you needn't worry, because I'm going to be comparing the two-wheel durometers as well as putting them up against their Bones STF counterparts in this review.

The first thing you'll notice when you skate the 101 duro wheels is that they aren't afraid to slide around. As someone who had been riding softer wheels before chucking these on, it definitely took some getting used to. After riding them for a little while, it quickly became apparent that despite being slippery, these wheels are extremely intuitive to control, akin to Bones STF controllability. Once you figure them out, they become an absolute blast to ride. Powerslides are super easy to hold and control with the 101s, and reverting 180s in the parks and streets alike is a breeze. 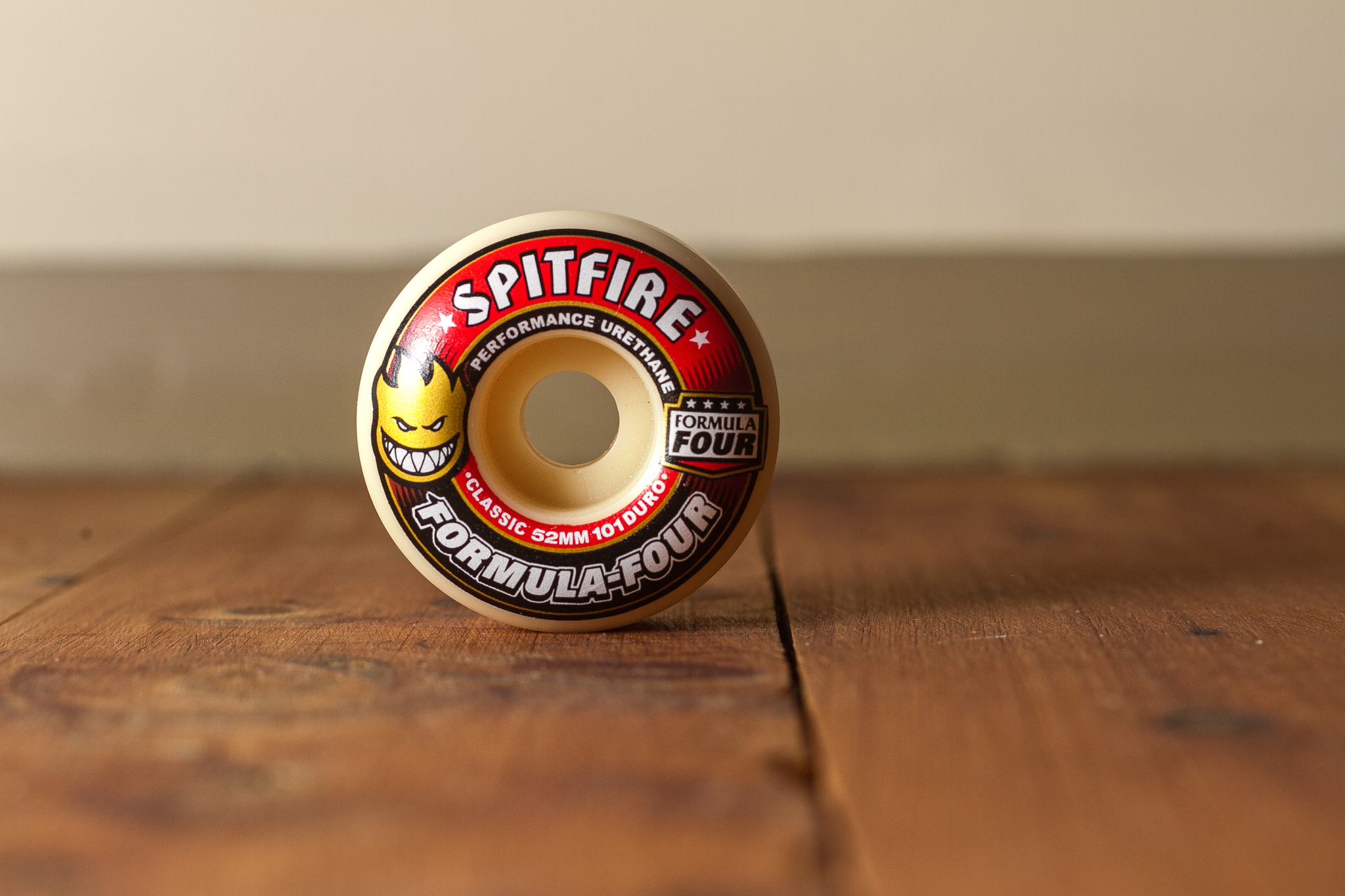 This is something that I think most Bones fans will be glad to hear. For me personally, and for many others, the ability to have control yet still slide intuitively and easily, whether you be powersliding or reverting, is one of the major drawcards of the Bones STF wheels, so it's good to see that the Spitfires are up to scratch in that department. It's a major improvement on the Spitfire Classics, and I'd genuinely rate the controllability to be on par with Bones, while offering slightly more slide. If you want to be able to slide yourself silly, the Spitfires are probably the wheel for you. I'm impressed.

In my personal opinion, the 101 duro wheels are at their best in the parks. In my own experience, harder wheels are preferred in the parks while softer wheels are more suited to the unpredictability of street skateboarding. Of course, some skaters prefer it the opposite, and it's entirely up to personal preference. As I mentioned, I initially felt that the 101s where too slippery in the parks — I found myself sliding out when locking into 50-50s and a couple of times when reverting from a blunt. If I'm honest, the wheels feel harder and slipperier than the 101 duro suggests. The reality is that they very quickly become easily controllable, and in no time I was having an absolute ball on these things. 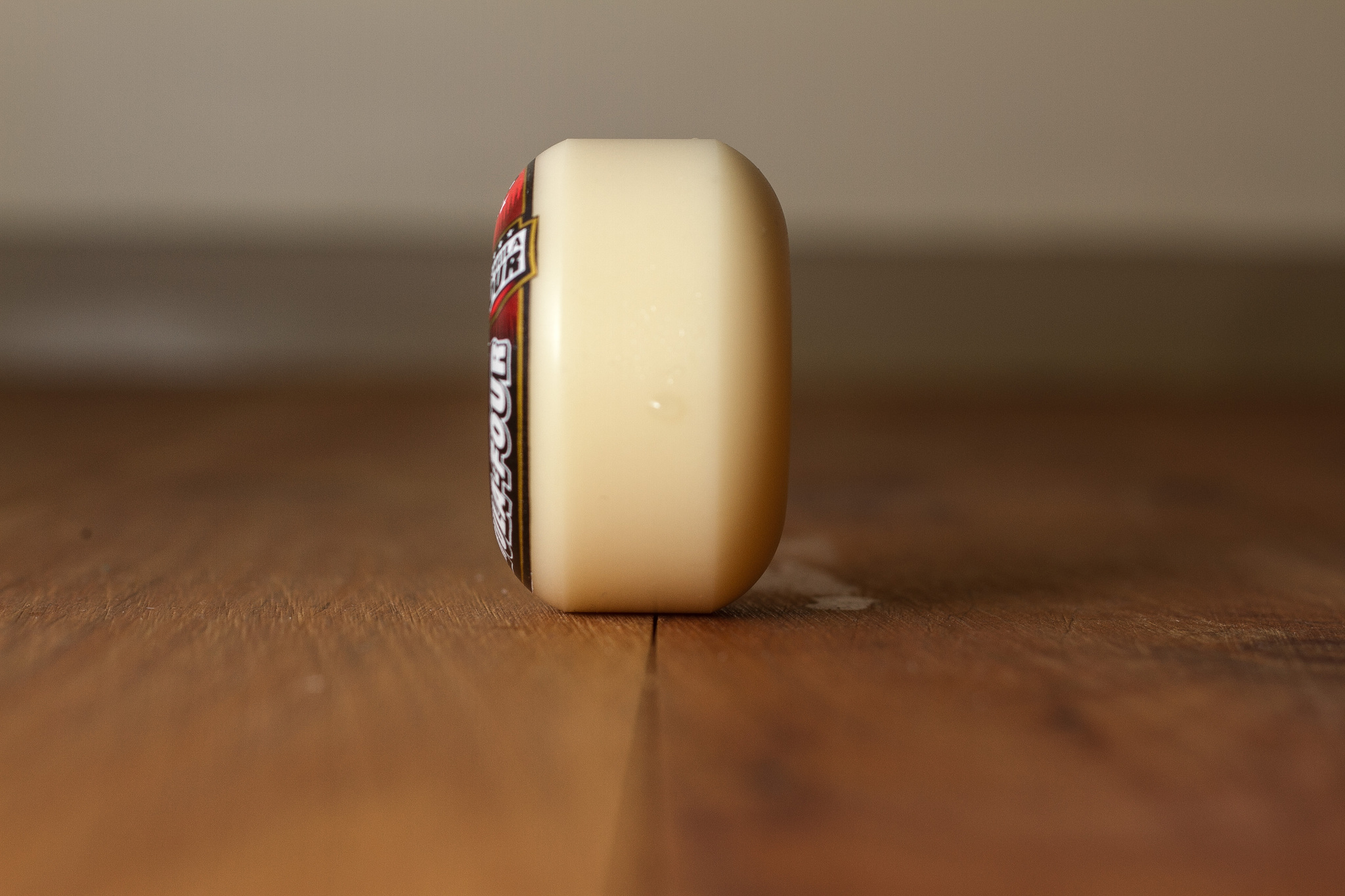 The 101s also hold their own in the streets, as you'd probably expect. They felt comfortable on rough surfaces, especially considering how hard they are, but they're not quite as comfortable as their 99d counterparts. If you're the kind of skater who regularly skates transition, or often skates smoother park surfaces, then I'd say the 101s are the right wheel for you. Either way, you're going to have a stack of fun on these things.

The 99 duro wheels aren't going to be super slidey, but they're absolutely perfect for cruising through the streets, hitting rough spots, and hucking down stairs and handrails. The first thing I noticed when comparing the two durometers was that they are hugely different wheels, in more ways than not. Despite the close proximity in numbers, the 99s are definitely very different to the 101s. For starters, the 99s are a much smoother ride, on any terrain. This is definitely expected, but it's almost surreal just how smooth they are when you consider their size and shape. They'd almost work on a cruiser board, yet they still manage to be effective with proper tricks in the streets. The softer range of STF wheels aren't as smooth as these Formula Fours, and whether that's a good thing or not is totally up to you. If you like to feel yourself on the ground, the Bones are probably a better option. If you're into a smooth ride and a softer stomp when coming off rails and stairs, these F4s are the wheel for you. 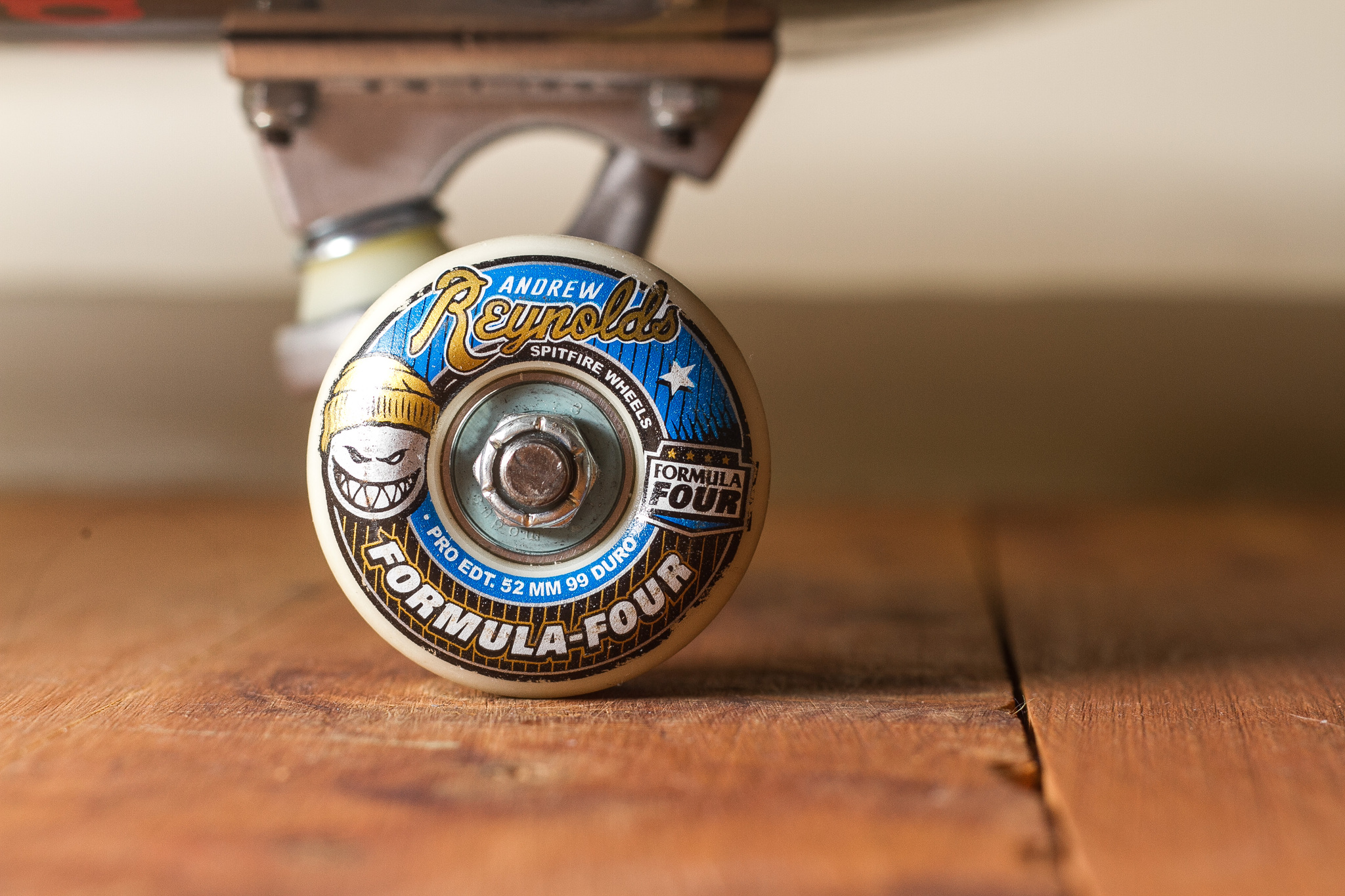 When riding the 99s in the parks, and particularly on transition surfaces, I felt they were definitely less comfortable than their 101d counterpart. While obviously extremely smooth (especially on newer parks), they tend to grip just a little too much for my liking. When skating ramps it's always nice to have that little bit of flexibility, particularly if you're someone who slides their way onto the coping, or is particularly fond of reverting out of ramp tricks, or sliding tailslides and bluntslides. In the streets, that extra grip is brilliant because it allows you to skate just about anything with relative ease, and tailsliding on rough ledges becomes a breeze. In the parks, however, you're skating perfect concrete, wood or coping, and controlling yourself becomes much easier, which in turn makes it less necessary to have grippier, softer wheels.

When it comes to speed, there's almost nothing between these F4s and a similar set of Bones STFs. Both wheels are exceptional in the parks and streets when it comes to maintaining speed, and assuming you've got yourself a decent set of bearings, you'll have no problems with either wheel. As per always, Bones and Spitfire are leading the way in this regard, and with these F4s I can safely say that Spitfire have stepped up to quash any doubts over the speed of their wheels. If I was going to split them, I'd say the STFs are slightly faster, while the Spitfires offer slightly more grip and control — and that holds true for both the soft and hard wheel types. The 99s are definitely the faster wheel in comparison to the 101s, as you'd expect from a softer wheel, but they both do what they're asked and more. At the end of the day, there's very little between any Bones STF and any Spitfire F4, when you compare wheels of a similar durometer. 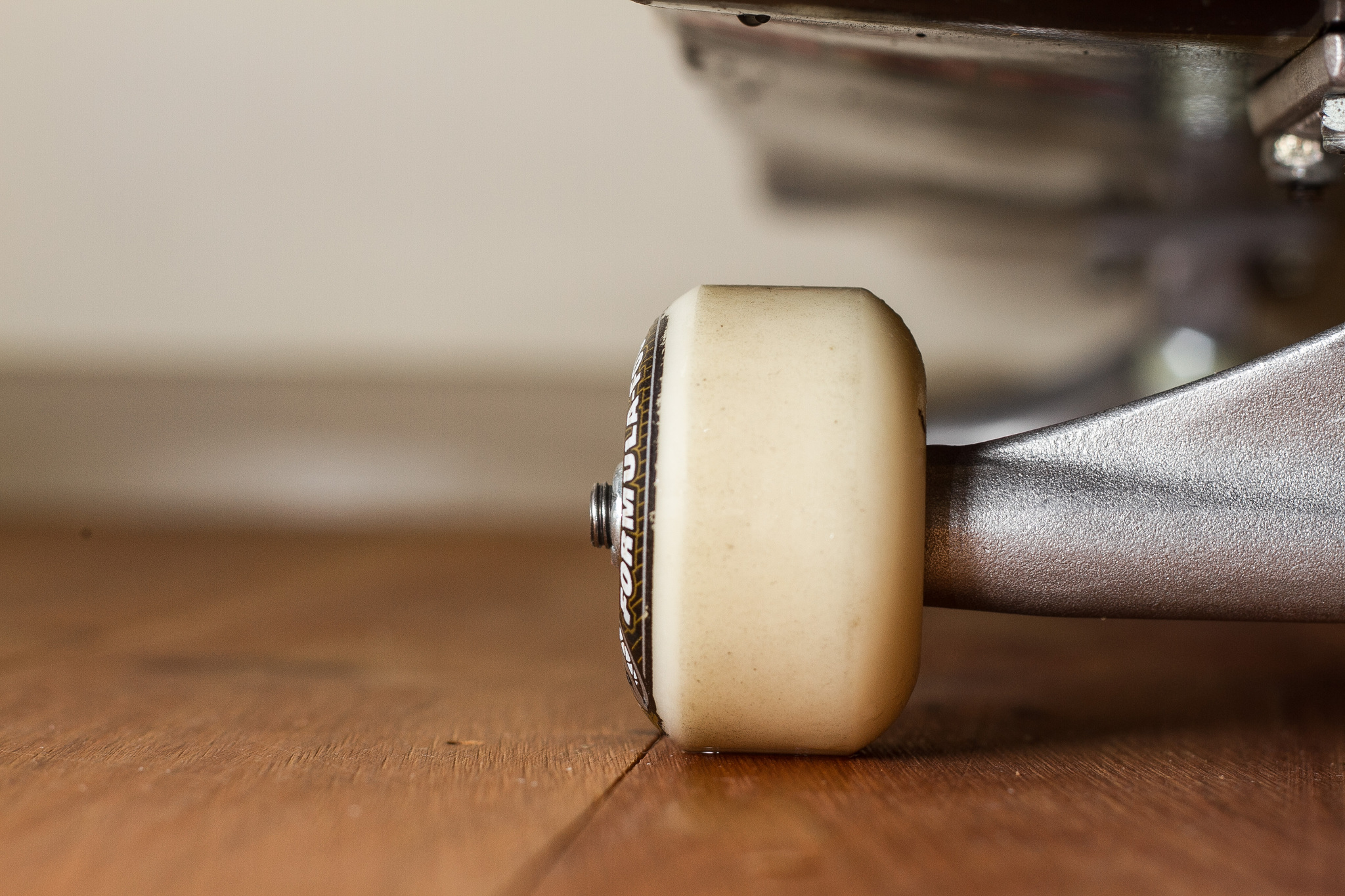 To be perfectly honest, I've never had a problem with flatspots on my wheels. Not since I started skating Bones wheels as a youngster, anyway. If you're into bluntslides or you enjoy skating sideways downhill more often than forwards, I'd say it's a safe bet that the Spitfires will hold up. I had absolutely no problems with the wheel shape throughout my time skating the Spitfires, and its a similar story with the Bones STF range. Something I will mention is that the Spitfires tended to have more “bounce” than I'm used to with the Bones, in terms of impact. Spitfires are often touted to have more spring in them, and I'm not going to argue with that, because it's something I certainly noticed and had to get a feel for. Is it a good thing? Not necessarily. I suppose if you're really into hucking yourself down large stairs or rails, then this could be a positive for landing, but it also opens up slightly greater potential for wheelbite. All in all, I'd say it's more of a personal preference thing, and I'm happy with either.

The general feel of the Formula Four wheels is very impressive. Only after going back to these Spitfires did I realise just how “plastic” the Bones STFs feel. It's not a major thing, but the Spitfires definitely feel a lot better to ride, and I mean that. They have a much fuller sound when you're stomping tricks, and they feel much more like a “real” wheel. I think most people who have skated the STFs will know what I mean when I say that they feel slightly cheap, despite how amazing their performance proves to be. The Spitfire wheels definitely get points for their general feel on the board. This holds true for both the 99 and 101 duro wheels. 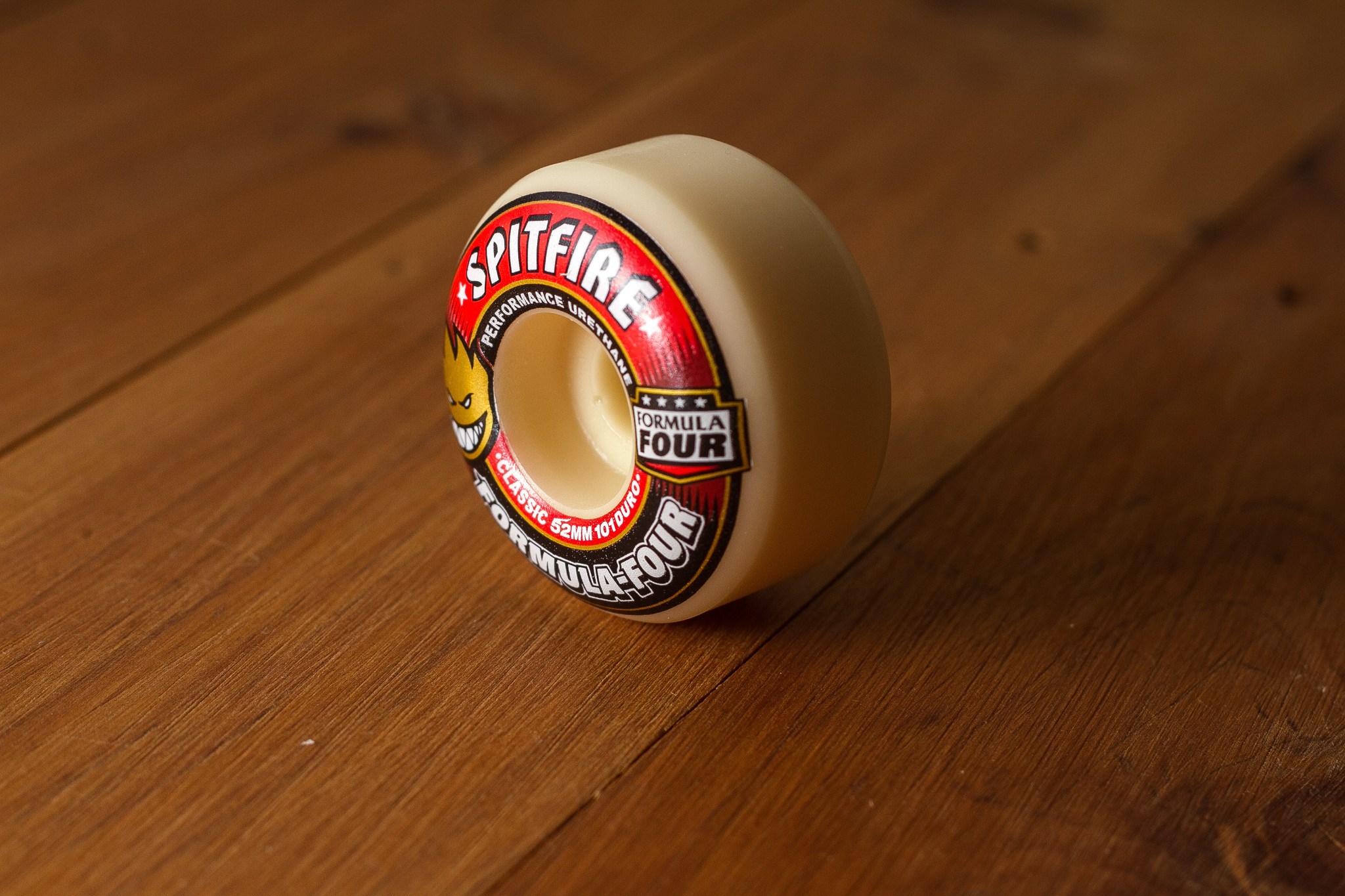 To be totally honest, I am absolutely impressed with the Spitfire Formula Four wheels. They're unbelievable in both the 99d and 101d incarnations and offer a broad range of features to suit a wide variety of terrain and trick preferences. They slide when you want them to slide, and they grip when you're looking for grip. They're fast enough — probably not quite as fast as Bones STFs — but they offer a much more authentic feel than the plastic-like feel you get from Bones wheels.

Are Spitfire Formula Fours better than Bones STFs? If I'm honest, yes, they are. Barely. At the end of the day the Bones are still extremely close, and many would argue they're better, but I just can't go past the feel of the Spitfires and the amount of fun I had sliding around on them. If you're a Bones man, I'd suggest at least giving them a shot. And, to those who are already on the Spitfire bandwagon, try out the Bones STFs if you haven't already. I'm glad I switched from the usual routine and mixed my wheel selection up, even if it's just for a little while. But, with the way these Formula Fours skate, I'll probably be sticking with them for a while.

This Bones man has been converted.

A look back at Chima's decade with Real Skateboards

The most naturally gifted skater on Earth