Dylan Rieder was not merely a phenomenally gifted skateboarder. He was, in many aspects, the most influential figure within the modern skateboarding landscape – a landscape he carved largely himself, with a trailblazing style both on and off the board. Skateboarders look like Dylan; they skate like Dylan, dress like Dylan, act like Dylan. With his impossibly tragic death yesterday, skateboarding lost one of its favourite sons.

While Dylan's passing is unbelievably painful for the greater skateboarding community – and well beyond – the thought that he'll live on forever through the mark he left on our culture is somewhat comforting. People will never stop attempting Dylan's signature wrap-around impossibles; 'Dylan arms' will forever be a style staple; cuffed pants and tucked-in wifebeaters will always be present. Dylan will always be present, and we can't thank him enough. Skateboarding loves you, mate. 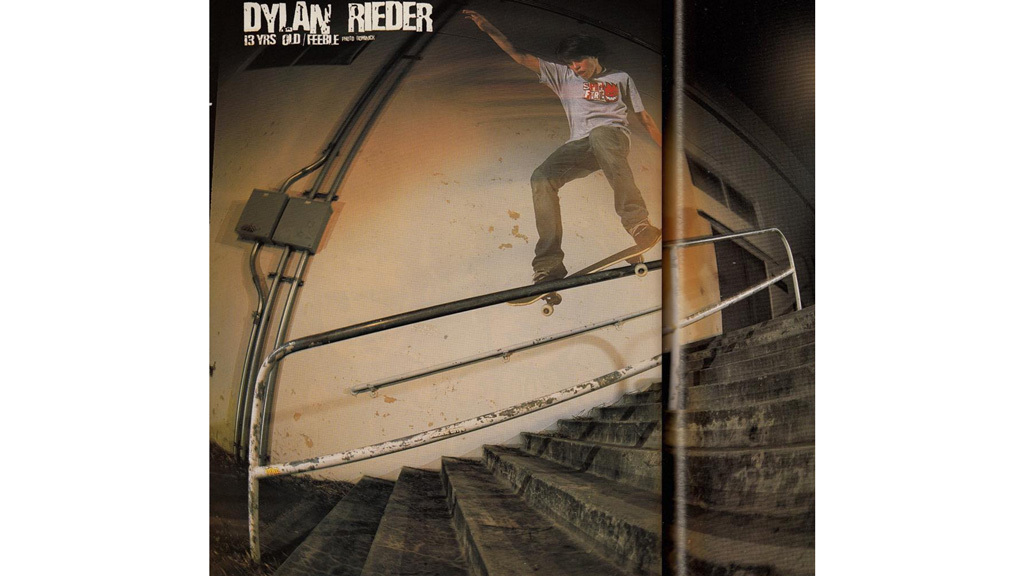 We'd known about a talented young Californian ripper by the name of Dylan Rieder for a while before 2006, but it was in that year that he broke into the forefront of the sport. With a highly memorable part in Transworld's A Time to Shine, an 18-year-old Dylan was suddenly a new fan favourite. We were introduced to his untouchable frontside flip, and watched in awe as he blended smooth park lines with raw and stylish street moves. Later that year, Dylan turned pro for Alien Workshop, one of the biggest and most respected teams of the era.

With his elevation to pro status, Dylan began filming for Workshop's magnum opus – Mind Field. With a new long-haired look and a freshly procured bag of tricks, Dylan's stardom skyrocketed following the video's release. He somehow looked even more natural than before, yet it was different to anything we'd really seen previously. The once little rail-chomping kid had grown into a style of his own. Dylan's style was his, and it was almost as much of an artform as anything else. Kids mimicked it. Everyone mimicked it. He made landing tricks look fucking cool – he made everything look fucking cool, without even trying.

A little over a year later, we were introduced to something different entirely. It was the early days of solo internet video parts – still a relative obscurity within the skate world back in 2010 – and Dylan dropped something that changed the skateboarding landscape once more. His kicks were like formal shoes, but he was skateboarding in them. His pants were rolled up his shins. He impossibled over the bench under the Manhattan bridge – how? You can't impossible over that, you can't do that trick like that. But Dylan could. His 'simple' tricks were popped unfathomably high, and never simple. Kids wanted to do what Dylan was doing. He was wearing Supreme, so kids wanted to wear Supreme. At this point, you couldn't go to any skatepark without seeing people who were mimicking Dylan. Skateboarding followed his lead.

Arguably his best and most influential part, though, was tragically his final. In 2014, Supreme released Cherry, and Dylan was the star. This was a man at his absolute peak. With a slightly tweaked style once again, he skated over picnic benches in schoolyards like nothing – and cemented his place as the king of Gardner Elementary. He re-invigorated the LA schoolyard scene while stamping his own style on skateboarding once again. He skated to INXS, he skated in black-and-white, he skated with an inset video of a girl smoking a cigarette. He wasn't afraid to do it differently, and skateboarding wasn't afraid to follow his lead. It was unanimously voted Transworld's Best Part of 2015, and helped cement Supreme as one of the hottest brands in skate culture.

Nobody did it like Dylan. And as transcendent as his influence was, nobody will ever do it like him again. Thank you, Dylan, for showing us what our sport was capable of. You're gone, but you'll never die.

"You always inspired with your effortlessness. You've left the most memorable legacy. For the future generations to come, they'll always remember you, and the gift you crafted"
– Alex Olson

The long-awaited Supreme video is coming