A heist on the streets of Melbourne 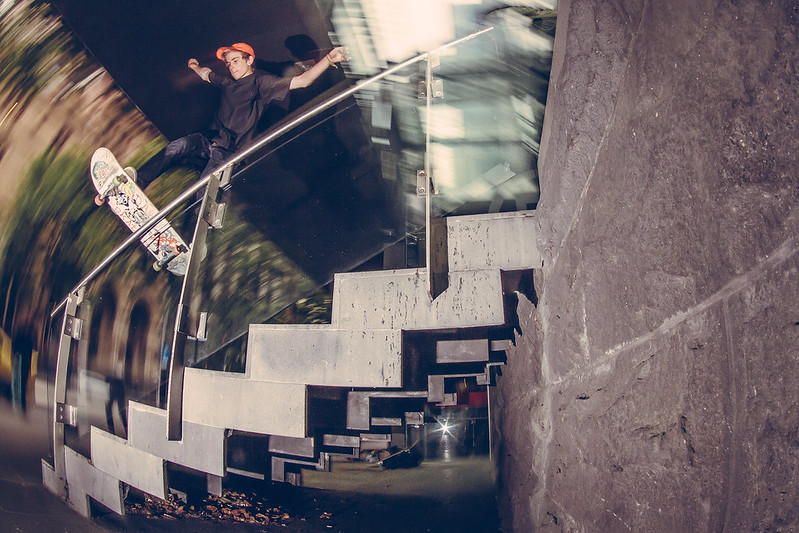 Skateboard photography is a ridiculous thing. On the surface it seems pretty normal; guys are riding skateboards, performing stunts, while other guys are documenting it. It’s just like any other sport or activity, and as skateboarding continues to grow it’s become more and more normal to see skate photos littered across the internet like any other form of photography. To a fashion photographer the lighting of skate photos might seem slightly interesting. To a landscape photographer our regular use of the distorted fisheye lens probably seems absurd. Most photographers from other fields think they could pick up a camera and shoot skateboarding without a problem. Just turn the shutter up, throw a speedlight on your hot-shoe and hit the park, right?

Skateboard photography, in my opinion, can be like a heist. The photo featured here was taken in the middle of Melbourne’s busy CBD just after lunch on a Thursday. This particular rail sits at the front of a bank that happens to be (for obvious reasons) heavily secured by guards and cameras. Skateboarders are used to this, and so are the guys who document them. Basically the skater is going to get 3 attempts at his trick if he’s lucky, before he and his crew are promptly removed from the premises. You’re in and out in a flash. It’s a heist.

For a skate photographer, this means you’ve got to be ready for these three attempts. You have to be in there setting up your gear, setting up flashes and light-stands, figuring out compositions, working out focal lengths, sorting out lighting angles, shutter speeds, apertures, the lot. You’ve got maybe 5 minutes to get yourself sorted while someone throws themselves down a handrail for the photo. If you make a mistake on the first shot, you’ve got 20 seconds to fix it before the skater is back on that rail. Security are out and after you. Just like skateboarding, shooting skateboarding is frantic, fast-paced, adrenaline rushing stuff. And, of course, it’s loads of fun. The joys of having 20 minutes to get the perfect focus in the studio are a world away.

Thankfully everything went well in this particular situation. We got in, set up, got the photo and landed the trick before security could chase us away. I’d quickly realized when approaching the spot that the roof over the handrail would mean that I’d be dealing with some uneven lighting, so I decided to try shooting with a slower shutter in order to blur out the light area and create a nice looking effect while I was at it. By turning the flash duration of my two flashes up I was able to freeze the action with the flashes so that the skater wasn’t affected by the slow shutter. After the flashes fired, I quickly twisted the camera so that the lightest parts of the image would get that swirling effect shown, and also create a less harsh light. It’s no surprise that so many skate photographers go on to dominate other fields of photography later in their careers, because learning to do everything at such a fast pace makes lighting up a Rolex or Ferrari seem a little easier. Thankfully this one worked out in the short time we had to shoot it. The heist was successful.