Reborn spots and their cycle of life 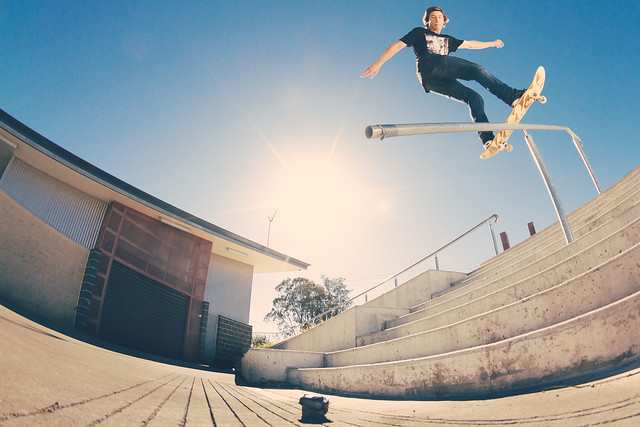 Even the oldest spots can become fresh again with a few tweaks and adjustments. Right next to this rail is a stale block of stairs that people have been skating for years. Nobody had ever thought about hitting this rail next to it – it was high, kinked and skate-stoppered, which wasn’t ideal. Rob and I came here with the intention of shooting a photo an another rail that was a little further up the street, but we were surprised to find that somebody had cut the kink off the 9-rail, rendering it (almost) skateable for the first time ever.

Our only problem was that the skate-stoppers at the top of the stairs were still firmly in place, which meant we would have to figure out a way around them. We couldn’t pass up skating this gem of a rail, so the skate-stoppers were quickly and covertly removed with a couple of tools we had and by jamming our boards underneath and ripping them up. Surprisingly, this worked a treat, and the rail was finally skateable.

After jumping on a quick boardslide, it quickly became apparent that this thing wasn’t nearly as perfect as we’d imagined. Whoever cut the kink off the end also cut off one of the supporting legs of the rail, which meant this thing was far from sturdy. As wobbly as it was, Rob managed to quickly roll away from a 50-50 and Smith grind. He then chucked himself on a couple of front boards, nailing it second shot. We were both psyched on the session and the reborn spot.

Rob had talked about trying another trick, but it was decided that we’d wait until the next weekend when a filmer was around. Unfortunately, when we arrived the next weekend we found that the rail had been freshly re-kinked and stoppered. We couldn’t believe it; the spot was dead barely before it had been created. Sometimes the skate gods just don’t agree with you. Alas, this is the cycle of the skate spot life.