A mix of luck and disappointment in Sydney 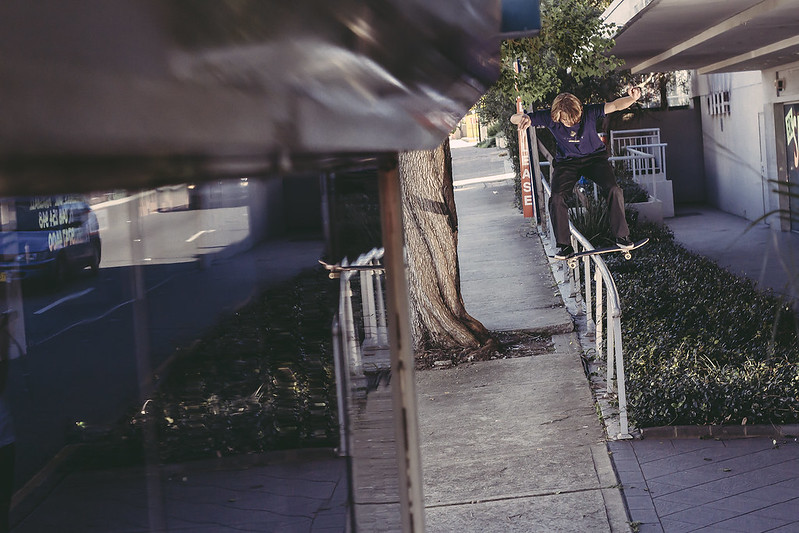 This is an interesting spot that sits right on the side of a main road in Sydney. It’s a spot we’d driven past a bunch of times but never thought about stopping to skate  – the bank was barely a bump, and the rail was somewhere around torso height from the ground. Then, seemingly overnight, the spot became a little more skateable. I’m not sure if there was a storm or strong winds, but the tree that had been lifting a once-small bump in the sidewalk had suddenly began to lean a little sharper, which meant the sidewalk was pushed up a little more with it. We figured we’d give it a go.

Needless to say, the spot was still super gnarly. It was high and the rail was long. Nobody was keen to skate it except for Corey. He’d been wanting to boardslide a high, long rail for a while, and this seemed like the perfect chance to do it. After a couple of attempts I started jumping around and trying to get a decent angle, dodging filmers and trying to find something that would be mildly interesting.

After I had something simple that I was happy with, I started trying to get to an elevated point somewhere and see how it looked from a different angle. I ended up hanging off the side of a bus shelter, dangling there like an idiot and hoping not to make a fool of myself next to the main road (if I wasn’t already). I thought for all money that I’d fall off, but thankfully for me it only took Corey one more attempt to land the trick, and the celebrations were cued.

Funnily enough, we wanted to go back to the spot to shoot something else a couple of months later, but the council had removed the tree and fixed the sidewalk so that the spot was unskateable once again. We were disappointed, but that’s one of the special things about skateboarding in the streets. Spots get capped, changed, created and demolished every single day. I think sometimes capping spots can bring out the best in skateboarders, adding that little extra inspiration and creativity that makes street skating so enjoyable. I have no doubt someone, someday, will come back to this spot and tear it a new one.