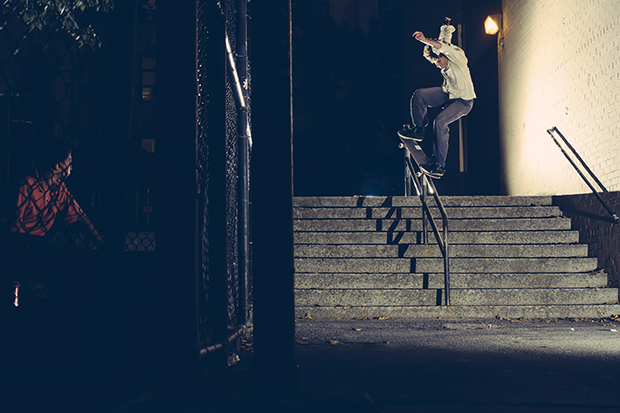 Shooting this photo turned out to be a fairly interesting experience. We’d heard about this rail, which is located up in Harlem, a not-so-friendly area north of Central Park. The rail looked perfect though, and there was no chance we were passing it up. Our problem was that we only had a few days left in the city, and this rail is located inside of a school. It was a Monday. This meant if we were going to skate it, it would have to be after school was finished. We had to skate it.

In the late afternoon we decided it was time to jump on the subway and head up to Harlem, in the hopes that the school would be empty and we could hop the fence and skate the rail. American schools, however, love their after-school activities. We arrived to a ton of elementary school kids playing basketball, skipping, throwing tennis balls around the place and getting in the way. It was chaos, but the fences were open and we figured we’d try out luck. Jamey jumped on some 50-50’s much to the delight of the school kids, and they along with the parents and teachers began to take notice. Our unlikely session was underway.

We thought we’d be kicked out immediately, but everyone was stoked on us skating there. Parents were enjoying it, the kids loved it and the teachers didn’t seem to care. It was starting to get dark, and Jamey was working away at his nosegrind, when people started leaving. The principal of the school introduced herself and told us that they were shutting up the gates, but they’d leave one open so that we could get the trick and then leave. We were gobsmacked. The principal of the school was letting us skate there, on our own, after hours. This is the kind of thing I certainly don’t get back home in Australia.

Jamey eventually got the trick, and we were outta there before it got too dark and the seedier folks of Harlem got out and about. It was an unbelievable experience though. A couple of the kids stayed with us to watch the trick, while their parents yelled at them to leave. You can see one of them to the left of frame. I chucked a flash on the ground behind Jamey to get that “pop” with the rim light, which worked out pretty nicely. The composition and main lighting was pretty generic. I was mostly stoked that I got the kid in the frame, because it’s a little reminder of what we went through to get the photo, and tells a little story that only we could know for sure. It those little stories that make skate photography something you can love.