A Decade of Influence: The Golden Videos of 2007

When flicking through the skate video collection recently, I was suddenly halted by the realisation that 2007 was ten years ago. It struck me like a rogue board to the lens – were the videos of 2007 really a whole decade old already? Fully Flared came out 3 years ago, didn't it?

Perhaps it's nostalgia talking, but that specific year has always stood out as one of the grandest in terms of skate video content. It was a changing time; the internet hadn't taken video parts hostage quite yet, corporate footwear and energy drink sponsors were only beginning to dip their toes in our pool, and the hard-copy DVD still reigned supreme. Street League? Olympics? Not a chance!

In our opinion, 2007 was one of the most influential years in skateboarding, period. While one video release in particular obviously changed the landscape, there were plenty more to back it up and leave their mark in some sort of unique and lasting way. These are the best of them, 10 years on.

2007 wasn't quite the golden age of Osiris – the D3 was fading in popularity by this point – but their team was undoubtedly one of the finest and most well-rounded in memory. With Russell Houghten behind the lens and editing suite, Feed the Need broke ground with an old-school soundtrack, flawless use of the VX1000, and an endless flow of fantastic skateboarding. Mainstays like Corey Duffel, Diego Bucchieri and John Rattray blended with young up-and-comers in the form of Marius Syvanen and Jimmy Carlin, among others, to deliver a video which is still talked about today. It's safe to dance. 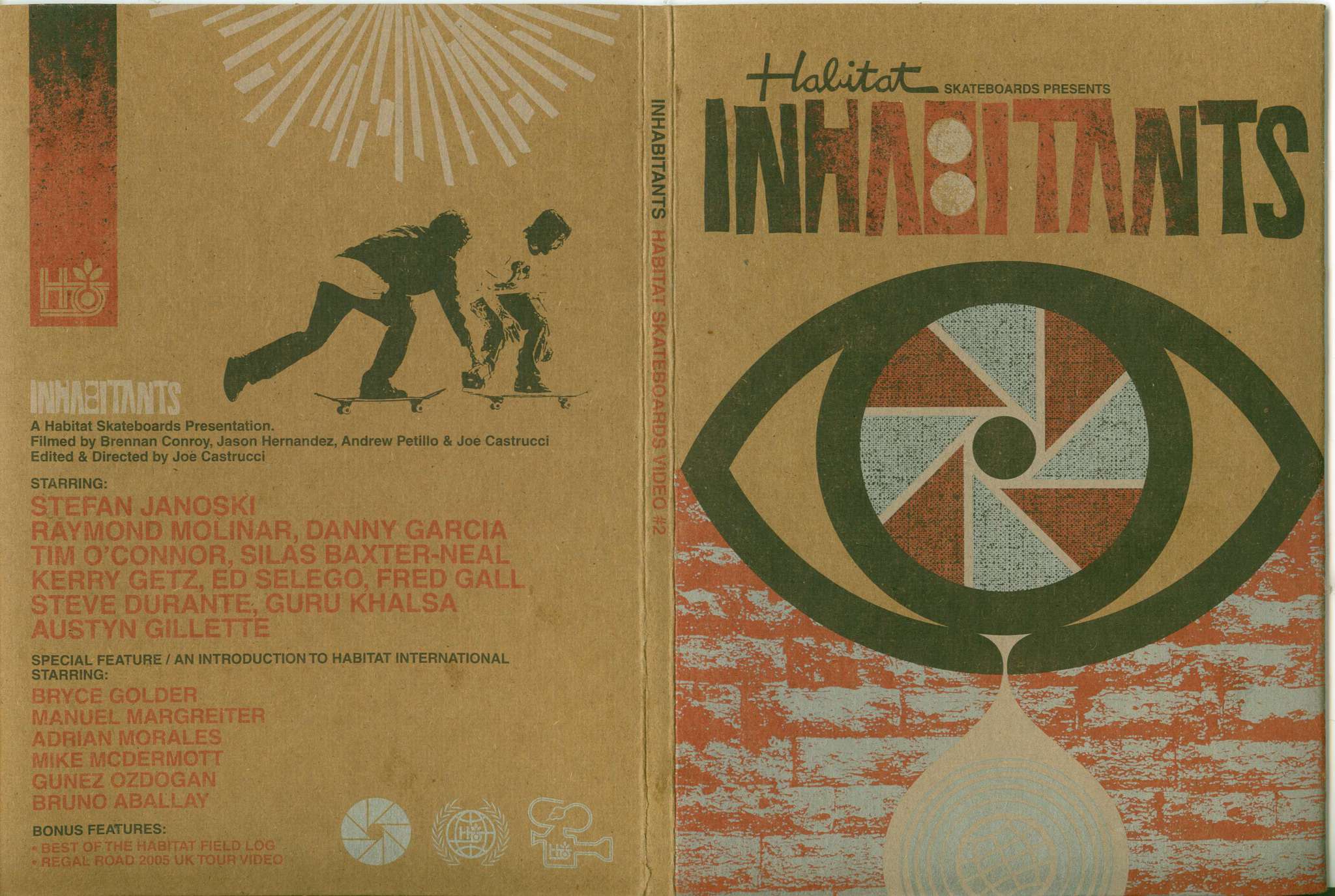 Pre-SOTY Silas, pre-shoe Janoski, and a pre-adult Austyn. 4 years after Habitat's iconic video debut Mosaic, Inhabitants marked the first time that Alien Workshop's little brother stood tall in a production which was wholly its own, and helped forge the brand's own distinctive visual style, thanks in no small part to lensman Joe Castrucci. The video marked the beginning of Silas' domination (which culminated in 2008's SOTY award), introduced us to a 15-year-old Austyn Gillette, reminded us that Kerry Getz was still the man, and, of course, included a Fred Gall part for good measure. Oh, and the soundtrack... untouchable.

NIKE SB: NOTHING BUT THE TRUTH

After ceasing their skate department briefly, Nike SB returned with their first full-length video in 2007 and marked the dawn of a new era in the world of skate. East Coast icon Dan Wolfe was the man behind the VX1000 in this case, as he documented a freshly curated team of diverse rippers. Australia's Lewis Marnell was just a young gun in '07, but opened things with a part to remember. We were introduced to Grant Taylor, a 15-year-old destroyer from Atlanta, while Brian Anderson and Gino Iannuci proved that it wasn't all about the young guns. People wondered if the Swoosh was here to stay... We think it's safe to say they've stuck around.

An entire movie in black and white? You either loved or hated the first – and really last – Mystery video, but one thing was certain: the skateboarding was high quality. Gilbert Crockett was an instant favourite after busting onto the scene in this one, a year before he cemented himself in Ride the Sky. The usual suspects delivered the goods, including the likes of Ryan Smith, Lindsey Robertson and a curtain-closing Dan Murphy, and Australia's Dennis Durrant featured with a half-part to shine his name in the international light. It's a video which is still talked about today, thanks largely to its unique style and bold art direction. 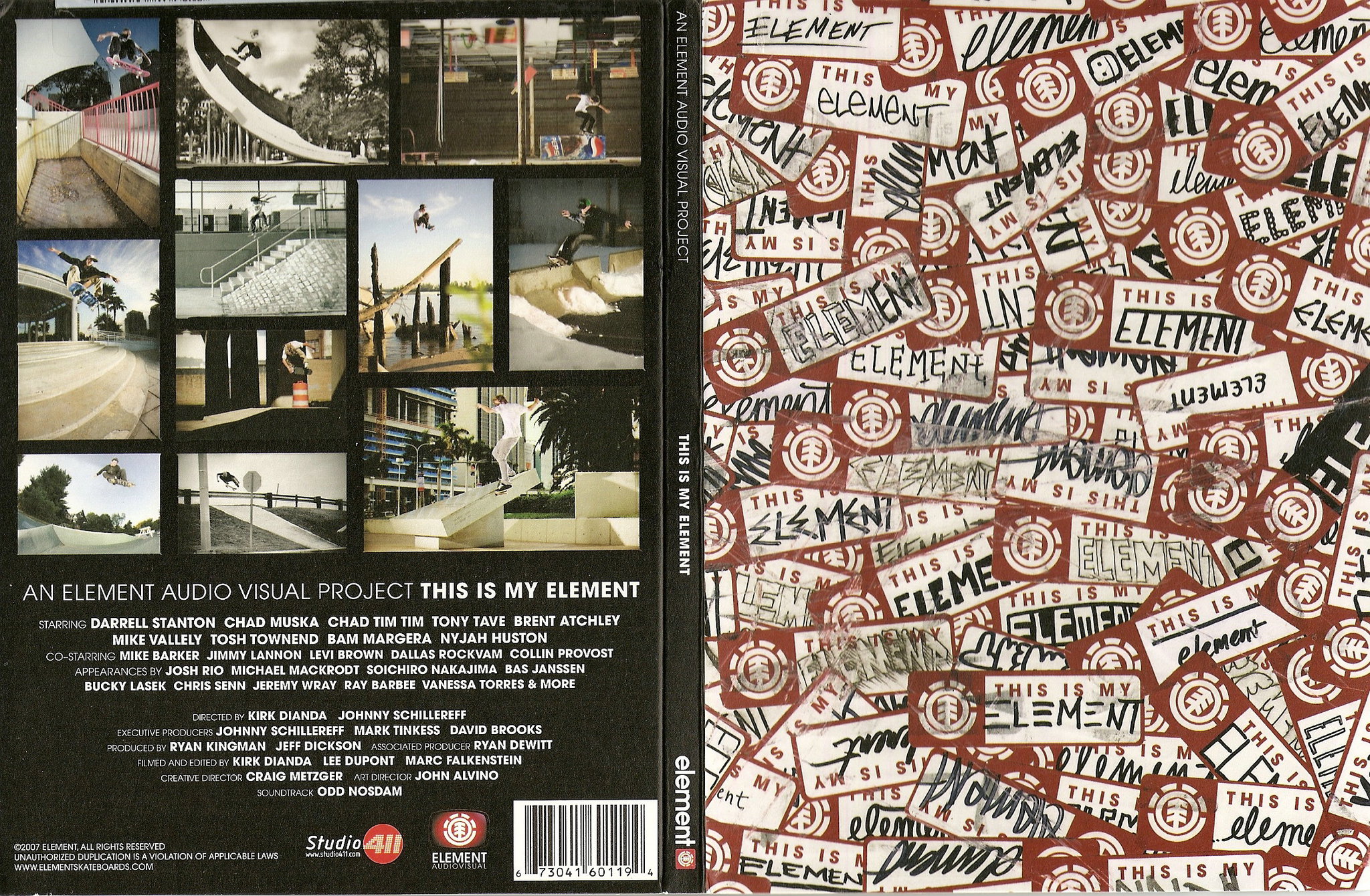 Element: This is My Element

Element was arguably at the height of its popularity around 2007, backed by the unfathomable celebrity of Bam Margera. It was a dreadlocked pre-teen who stole the show in this video, though, and it left the skate world in a state of disbelief. Nyjah Huston had been rightly touted as a future star, but this video proved that wrong – he wasn't a future star, he was a star right now. At just 12 years old, it's genuinely hard to fathom the level of skateboarding Nyjah displayed, and we haven't seen anything like it from someone that young ever since. A supporting cast of legends – Muska, Bam, Bucky, Mike V and Chris Senn – blended with Element's young talent to create a timeless classic. But it was Nyjah who stole the show, and changed the game.

Nothing eS could have possibly done would have compared to their first video, Menikmati, and this video was by no means on that level. But for what it was – basically 4 years of tour footage wrapped up into an entertaining and high-quality video – Especial has found itself as a memorable relic of the later 2000s era. Nyjah appeared again, this time slightly more low-key, though still mind-blowingly skilful. The entirely revamped team also included PJ Ladd, Justin Eldridge, Bobby Worrest, and Australia's Cale Nuske. Rodrigo Tx and Rick McCrank remained from Menikmati, and reminded us why eS was one of the best companies ever, period. This one was an underrated gem. 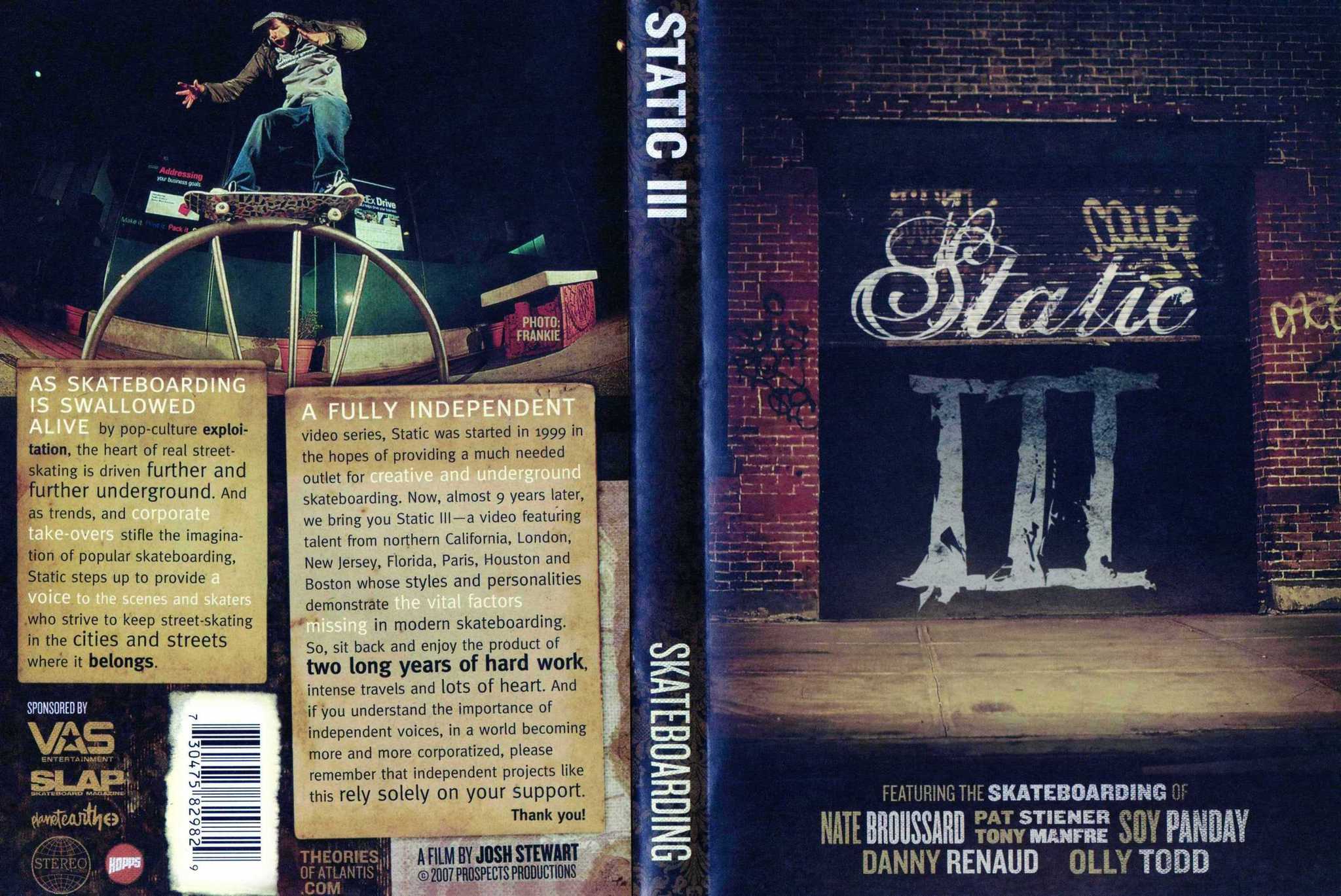 In terms of "game-changing videos released in 2007", Josh Stweart's independent flick, Static III, might have been the most influential of the lot. While the current skateboarding landscape is stacked with incredible indie videos, Stewart's Static series had stood almost alone in the realm of high-quality brandless videos since the first one dropped in 2000. Static III proved that the very best videos didn't have to be from companies or teams, and plenty would consider Josh's '07 video to have been the best of that year, bar none. The likes of Colin Read (Mandible Claw), Zach Chamberlain (Sprinkles) and Ryan Garshell (GX1000) have all credited Stewart as a major influence in their own independent video productions. That's all the praise you need.

Where do we even begin? Lakai changed the way skateboarding was approached with Fully Flared. The way ledges are skated – constantly flipping in and out, technicality with style, the lipslide combo craze – was shaped by the likes of Mike Mo Capaldi and Jesus Fernandez. A runtime of 90 minutes was unheard of, and Marc Johnson's 13-minute part broke new ground and single-handedly earned him the SOTY award for '07. The intro was a cinematic marvel – the likes of which we'd never seen in skateboarding at the time. Cinematography skits and projects were intertwined with the skate footage, and Ty Evans cemented his place among skateboarding history through his creative use of the VX1000 and never-before-seen editing style.

Guy Mariano's long-rumoured comeback was completed with a two-song part which exceeded everybody's expectations by a significant margin, Koston dropped arguably his final great part, and a young kid by the name of Alex Olson showed he could live up to his father's skateboarding legacy. It's difficult to explain just how influential this video was, but it's safe to say that the skateboarding environment was heavily altered upon its release, and helped cement 2007 as a turning point in the history of the sport. 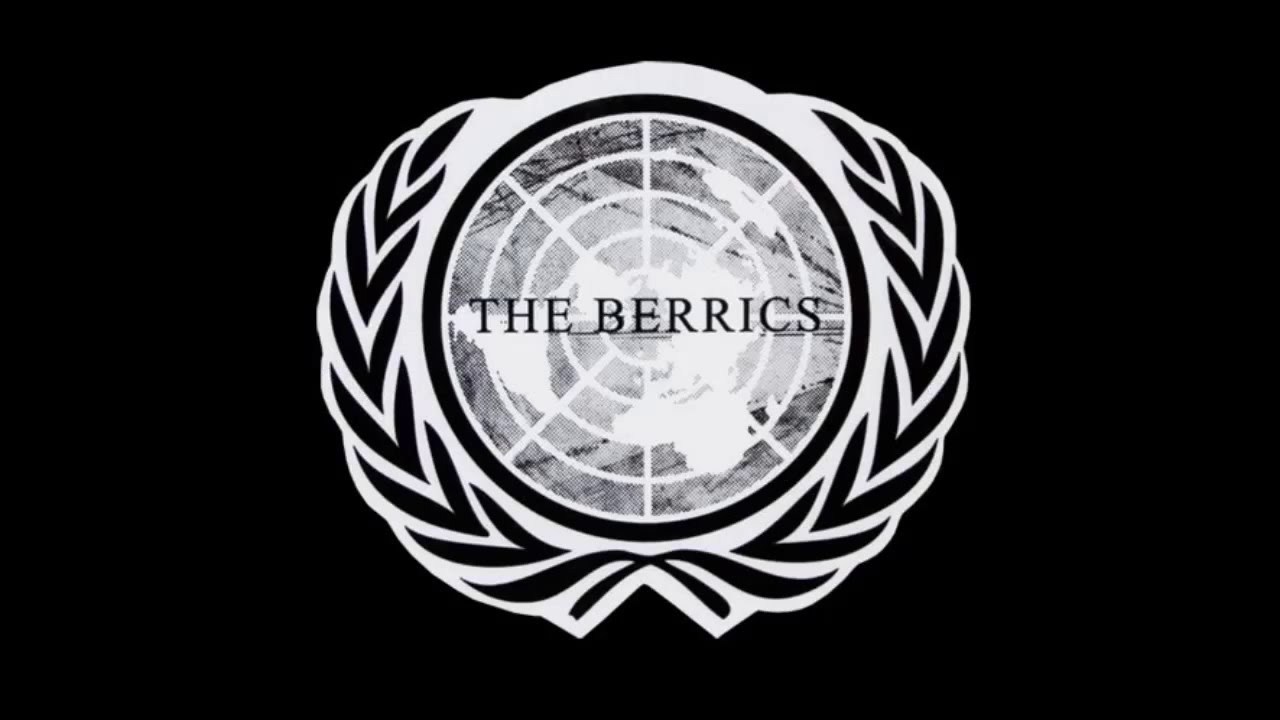 If we're talking about influential video content in 2007, The Berrics has to be mentioned. The Berrics website was launched in 2007, and completely altered the way skate content was digested. The first Battle Commander was released in December '07, followed closely by the first Recruit video, while the United Nations series had also begun in late 2007. The Berrics was probably the first website devoted solely to skate content, and its incredible popularity showed that the internet was the best place to release skate videos if exposure was the main aim. The current landscape of online content owes a lot to The Berrics' early forays in '07 – that much is certain.

7 minutes of Koston at his best

One year since the tragic passing of Marnell