This year you’ll be able to follow the WSL around all 11 world tour stops, with insights, fantasy surfer tips,  event re-caps, surf forecasts, world title contenders and the mechanics on event locations, all here on Boardworld.

The main entrance point to Snapper is through the “key hole” at the top of the point.  Once you’ve negotiated the rock jump or paddled out and you’re in the line up, this sandy right hand point break offers all the fruits you could ask for in a wave. Reeling barrels, smashable lips and of course an overwhelming and some what intimidating crowd.

Super bank season works at its best from March through June. During this time easterly and north easterly swells grace the line up, over a sandy bottom creating one of the most perfect right hand points in the world.

*Gabriel Medinas step dad, Charlie gets banned from the first 3 tour stops of 2017 due to bad behaviour at a tour stop last year. 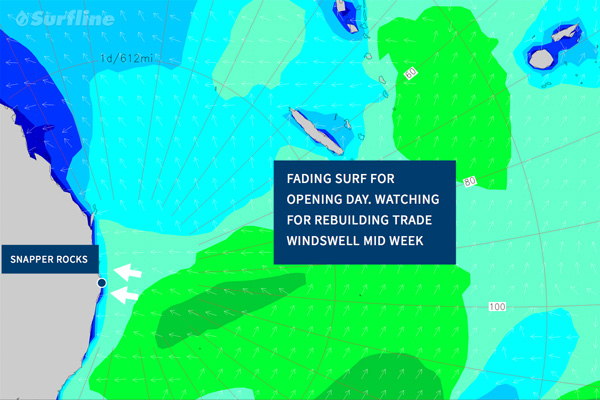 Swell/Surf Outlook:
Our current Tasman Sea low will spin down/weaken while tracking off to the SE over the next couple of days. Swell from this will be trending down over the weekend and through early next week. By Tuesday we are on the last bit of this with surf around the waist high range.

We’re back for another year of (impossible to pick the winner) Fantasy Surfing. For those of you that haven’t played before, your FS team must consist of 8 surfers. 2 Tier A surfers (high seeds), 4 Tier B (mid range seeds) and 2 Tier C surfers (lowest seeds). The aim of the game is to get all you’re surfers through to round 5 and the finals. The person with most points for each surfer wins! Wins what you ask? Well that depends if you start up a league (club) and place a wager like myself and a few mates have!! Enough about my gambling habits…. Lets see who’s stacking up for the Quik Pro.

Tier A
Always a tough tier to pick. These picks are your aces in the hole. My choices here would be, Julian Wilson and Gabriel Medina. Julian recently got hitched and got runner up at the Australian Open of Surfing at Manly Beach. The guy looks hungrier than ever. Dropping 8’s and 9’s all over the AOS, he’s going to be dangerous at Snapper. Did I mention he’s also a previous finalist?
Gabriel Medina has every trick in the book on lock, including amazing heat strategy. Your 2014 world champion, Medina is no stranger to success. He’s going for a second world title this year. Look out.
Other options. John John Florence, Jordy Smith

Tier B
Filipe Toledo, Mick Fanning and Connor Coffin. These 3 guys combined have the biggest rail game of anyone on tour. t Filipe won here in 2015 against Julian, Mick Fanning, well… Say no more. Connor Coffin will be looking to cement his place amongst the tour elites.  Connor has just picked up a new sponsorship deal with Ripcurl, who he’ll be out to impress with his monster rail game.

Tier C
Pick wisely here young jedi, and accumulate points you will. Rookies are a good risk here. Zek Lau and Leonardo Fioravanti. Two power houses. Zek managed to qualify by the skin of his teeth and will be out to show the critics he means business. Leonardo is a surgeon. This guy’s surfing is so particular and on point, I’m sure even the top dogs will have trouble bringing this guy down.

All proven guys with a bag of tricks bigger than yours. Europe has the strongest presence for the first time ever. Australia has the top 2 QS qualifiers. Connor O’Leary won the QS last year and Ethan, who is the current world junior champ came a strong second in the QS ratings. Zek Lau is the only Hawaiian to qualify and just scrapped through, but this should be his break out year, a QS veteran, Zek will be nothing short of 100% focused.

I really like the look of the rookies this year. All hungry and all biding for a permanent spot on the world tour.

World Title Predictions
As I write this article, Mick Fanning has just announced he’s committed to the world tour, full time and gunning for a 4th world title!!! More on that here.  Kelly will also be in the hunt for his 12th title this year after “finally getting his shit together”.

With the 2 vets going at it, we can also add some young spark to the mix. John John will be out to defend his 2016 title, with Gabs Medina hot on his heels. Julian Wilson, Jordy Smith and Kolohe Andino will be very fired up and looking to come the title party.

This years race could be the best we’ve seen for a while with the rookies, vets and anyone in-between, chasing down the 2017 world title.

Summery
Overall, this years CT is shaping up to be an absolute doozy and Snapper Rocks is the starting point of it it all. Will Kelly kick off his campaign with a win? Will Mick showcase his best at home? How will Owen Wright handle coming back on tour after a life threatening injury? Will the Brazilian Storm continue to flare?  All questions will be answered when the event kicks off, March 14th. Make sure you tune in live to the WSL site for all the action!

Great write up, @saltyseadog. Should be a great year with Mick Fanning back in the hunt!