Last years Billabong Pro winner and all round tube pig, Jeremy Flores doing what he does best. Can he do it again this year? Photo: WSL - Kelly Cestari

Introduction
Firstly, my apologies to anyone who’s been following these write ups. I wasn’t able to get the Fiji or J Bay articles out due to my work commitments and being in remote areas, however I will touch on these events shortly.

For now we focus our attention to stop number 7 on the World Surf League Championship tour.  That heavy slab of reef in the middle of the South Pacific, more commonly known as Teahupoo or Chopes for short will play host once again to the top dogs on tour. Tahiti is just one island in a chain in French Polynesia. Tahiti is a wave rich haven, with its lush scenic back drops and clear blue water, a true surfers paradise.

Breakdown
Teahupoo is a heaving right hand, barreling wave thats breaks of jaggered reef break. The reason it breaks the way it does is due to fast moving ocean swells that hit a very shallow reef. Fiji and J-Bay Recap
This years Fiji Pro some epic conditions through out the contest, but it was the final between rankings leader Matt Wilkinson and boy wonder Gabriel Medina. Medina outclassed the Aussie in the final to take the win cementing his place as a surfer in hollow reef breaks. Other surfers to make a push up the rankings were, Kelly Slater, Adrian Buchan and John John Florence.

J-Bay. What a contest for Mick Fanning and Julian Wilson, returning to the place of their shark encounter. As we all know Mick took the win, but Julian and Mick did get to face off in and square up some unfinished business. John John Florence got to meet MF in the final, Mick edged out John John in an extraordinary final by .57. Josh Kerr, Gabriel Medina, Kelly Slater and Filipe Toldeo all had good results.

Wildcards
The wildcards will be: Bruno Santos (BRA) and Hira Teriinatoofa 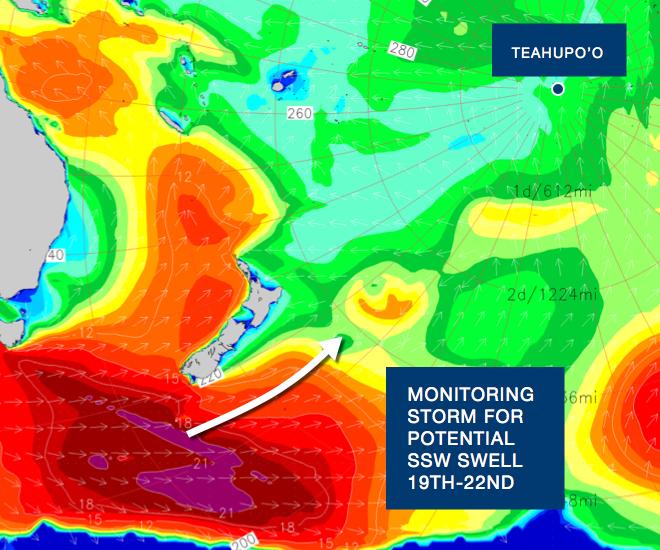 Brief Overview: A modest pulse of inconsistent SW/SSW swell fills in Friday PM and over the weekend to open the contest waiting period. Another, potentially stronger SSW/S swell shows for Tuesday/Wednesday (23rd-24th) before gradually easing. Slower surf expected after that at this point.

Swell/Surf Outlook: A storm system moving through the Southern Ocean will track south of New Zealand during the next 24-48hrs. Winds associated with that system will send a modest pulse of longer period SW/SSW swell (220-210) that gradually builds on Friday PM and Saturday before peaking on late Sunday/early Monday before fading.

Calling all barrel riders! Joel Parkinson once said that the one skill you need on tour is barrel riding. He’s dead right. Chops is hard to ride even on a small day let alone trying getting shacked on a 8-10ft day. Going on performance this year, I like the looks of the following surfers for fantasy surfing.

Tier A: Lock and load John John Florence and Gabriel Medina. These 2 are no brainer picks for this event. Both sitting second and third on the Jeep leader board respectively, you can count on these two guys on being there at the end to make a push for the top spot and cementing their world title hopes.

Other Tier A Options: Italo Ferreira and Julian Wilson

Tier B: Conjure up good picks here and you’ll go far kid. Tier B has a lot of excellent options. Wiggolly Dantas is a beast in the big hollow stuff, Wiggolly has done well the past 2 events, expect him to keep this momentum up.  Adrian Buchan is another ace in the hole, a past winner here and Ace has had some great results this year I can only see him continuing on this path. A great dark hose pick with low percentage ownership. Kelly Slater. Not much needs to be said about the guy. Especially after his 2014 heat against John John. Lock him in.

Other Tier B Options: Joel Parkinson and Sebastain Zeitz

Tier C: Last years Tahiti champ Jeremy Flores is the best of a bad bunch here. Though his form has been questionable this year. Jeremy thrives in the belly of the Chopes beast. He’ll be hungry to rack up some points as he sits quite low in the rankings. Kai Otton is another charger that’s had some good heats at this venue. Again, his form this year has also been a bit lack luster. Thats why i like both these guys. Fuel for the fire.

The World Title Race Check-in After Fiji and J-Bay, the gap on Matt Wilkinson has been closed. Hot on his heels are John John and Gabriel. With just 5000 points separating the 3. Though anything can happen at this stage in the title race. With the top 10 still all in the hunt. Sebastian Zeitz sits are world number 10 on just shy of 20000 points, 14000 behind the leader. Mick Fanning, after just surfing 3 events, rounds out the top 5. Could he win the world title??!! Highly doubtful. Though stranger things have happened. My prediction? Wilko, John Florence, Medina and De Souza will head to Pipeline in an ultimate showdown. To be continued…...

Summery
With the world title race still wide open, its still anyones game at this stage. Wilko needs to put the pedal to the metal if he wants to keep the yellow jersey. He’s going to have a pretty big target on his back when this event comes to life. Can some of the bottom dwellers and rookies make a come back? Connor Coffin, Stu Kennedy, Jack Freestone and Jeremy Flores all need top results if they’re to compete on the big stage in 2017. Grab your inflatable flamingo, sit in the channel and cheer on your favourites in this years Billabong Pro! Just don’t get caught on the inside!!!

Great write-up, @saltyseadog! Pumped for this!

Kelly is back in a big way taking out JJF in the final.