Can someone tell me how surfing contest is judged?

To me 90% of it looks the same, a guy riding in the barrel and slashing the lip. Every now and then you see an air but I don’t get how are they judged.

Surf judging at the highest level is based on a selective criteria:

Commitment and degree of difficulty

A panel of five judges scores each wave on a scale of one to ten. For every scoring ride, the highest and lowest scores (of the five judges) are discounted and the surfer receives the average of the remaining three scores. There is no limit on the number of waves that will be scored, but the two best scoring waves (each out of a possible 10) are added together to become a surfer’s heat total (out of a possible 20).

The top 2 scored waves by each surfer determines their overall heat total.

To the non surfer, all moves preformed can kind of look the same and repetitive, however if you take a look at a surfer like John John Florence and then take someone like Glen Hall you’ll see the difference in style and power between the two.

I can see the difference in style and power but I can’t see the variety and difficulty of movement. I understand when someone does a 360 or something like that. But when someone is in a barrel or just slashing the lip, I don’t see where the variety/difficulty is.

In very simplistic terms it’s kinda like saying that a carving turn vs a kick turn on a snowboard are the same.  The degree of vertical attack of the lip is kinda three dimensional as well.  You may hear the commentators talk about a vertical attack or a “twelve o’clock” hit the lip.

Primarily this means if you’re looking from the beach the surfers board at the point of impact with the lip is positioned vertically with the nose of the board where the twelve would be on a clock face.

This is not a 12o’clock backhad reo, more like a 2o’clock although nobody will ever call it that, it’s just not quite as hard or committed. 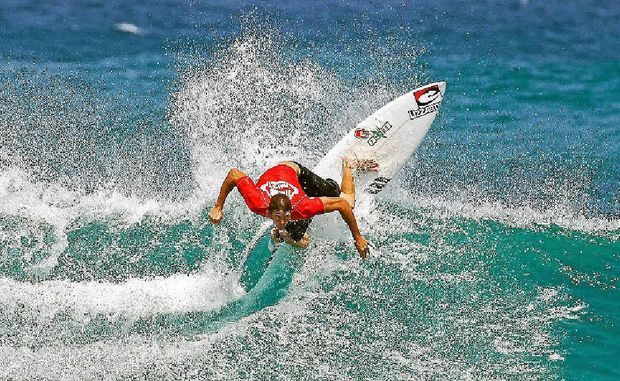 There is also the steepness of the wave that comes into play at that point, when the commentators talk about beyond vertical.

Combining the vertical across both aspects is going to get you more points than in only one aspect.  Additionally there’s what happens after, how many degrees you rip the board back around before transferring onto the next move.

Say the bloke in this pic (Kolohe) had turned from the 12 o’clock position, he’s turned the board maybe 180-190 degrees 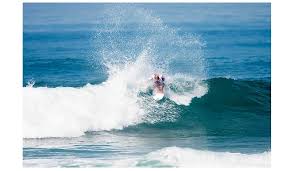 In this pic the bloke (Matty Wilko who IMO has one of the best backhand blowtails) has gone through around 220 degrees if he came from the 12 o’clock like he so often does on his backhand.  Adding the extra flair of blowing the tail and fins out the back for some extra slide and release.

Blowing the fins out the top of the wave, sliding and regaining control and seamlessly linking into your next bottom turn isn’t very easy at all.  In contrast, taking off and stringing together a lot of 2-3 oclock top turns that arc through maybe 100degrees is relatively a lot easier.

There’s a lot of different types of turns that to an outsider are barely distinguishable between in terms of how they look.  Take a look at this wave of Fannings from last night in the Quik Pro France

The first turn is best described as a big arcing top turn, he doesn’t really attack the lip he starts his turn at about 10o’clock near the lip and puts it on his heel rail and rips the board around in a really tight fast arc that sends a lot of spray.

The second turn he starts at around 11o’clock, probably near on vertical on the side plane, attacks the lip, rips the board through more of a pivotal 180 degree’s where the pivot point is on the lip but about one third of the way from the tail of the board to the nose.  As a result he also blows the tail of his board out of the lip, momentarily slides till his fins re engage and sets again for the next bottom turn.

Third turn is similar to the second but he starts at around 10 oclock, pivots through about 170 degrees with blow tail and re adjusts mid slide/pivot to about 140 degrees before resetting for the next bottom turn.

The last turn is similar again, about 11 oclock again, pivot slides about 150 degrees with a smaller amount of tail blow.

With regards to his score of 9.03 I think it is, the first and second turns are the money ones, the third is decent and the fourth is just to finish the wave off strongly.  Needless to say Fanning is very very fast.  In comparison most above average surfers on that same wave would get three turns in with Fannings fourth turns arc degree with probably almost no tail blow out and be pretty stoked with their ride.

Thanks for the detailed explanation! Makes sense now.

That’s just scratching the surface Skip, the nuances of just one type of turn could go on for pages and pages detailing how each and every turn that looks similar is actually quite different.  A lot of it is because every wave is different as well which makes it all so much harder!