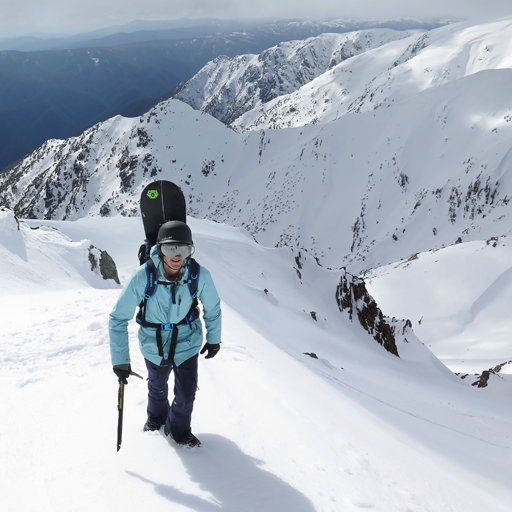 On a sunny Saturday morning in November, my close mate Erryn and I trekked on foot from Charlotte Pass in the Kosciuszko National Park, Australia, in search of late season snow. Our plan was to hit Blue Lake as the south facing chutes usually hold snow well into late November. We weren’t overly confident, given the absolute absence of snow on the ground but we forged on regardless.

We crossed paths with couple of fellow late season snowboarders on the way, who quickly relayed the one piece of news we didn’t want to hear, that there was no snow in the chutes, we decided to push on anyway. 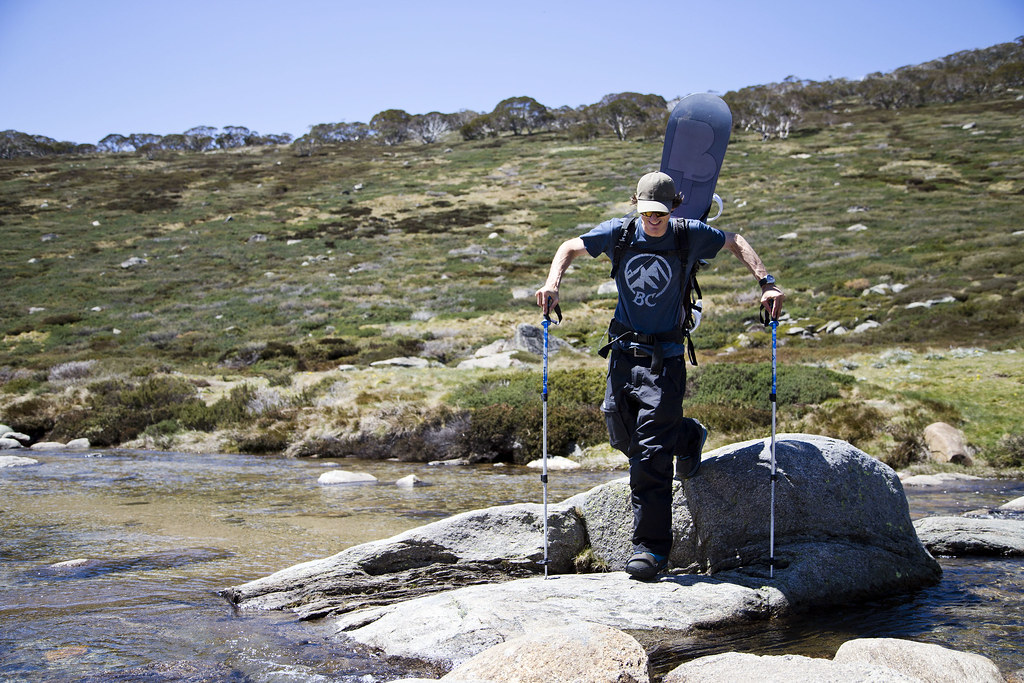 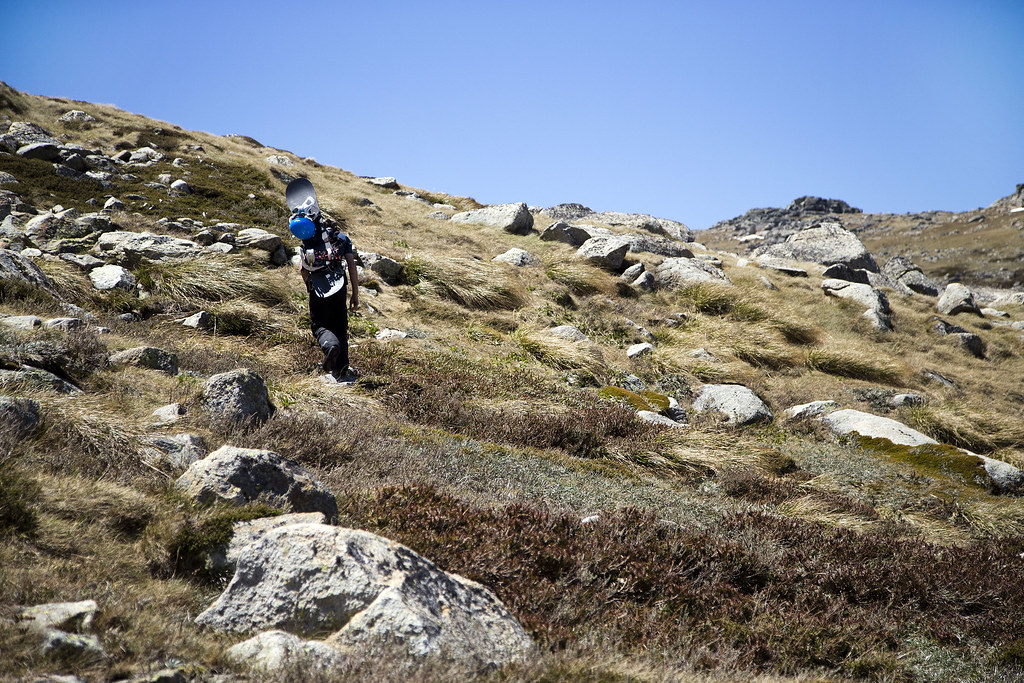 We arrived at Blue Lake and were immediately surprised to see that the cover was still good. This confirmed the other snowboarders were either blind or pathological liars. We headed towards the peak for a better gander at the chute, and noticed there were no visible tracks on any of the faces.

So far, so good, now for the chute itself. Erryn had a look from the top and unfortunately it featured a vertical drop in and was less than board width wide, not ideal given the conditions. Undeterred, we decided we would ride a nice steep line on the other side of the chute and then climb the chute from the bottom. 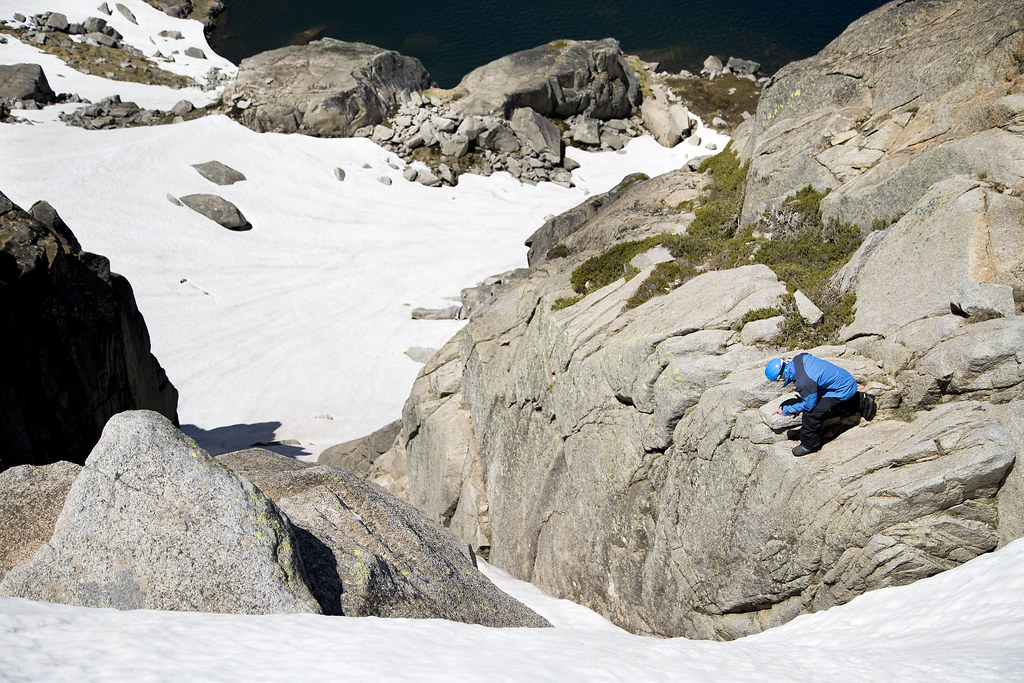 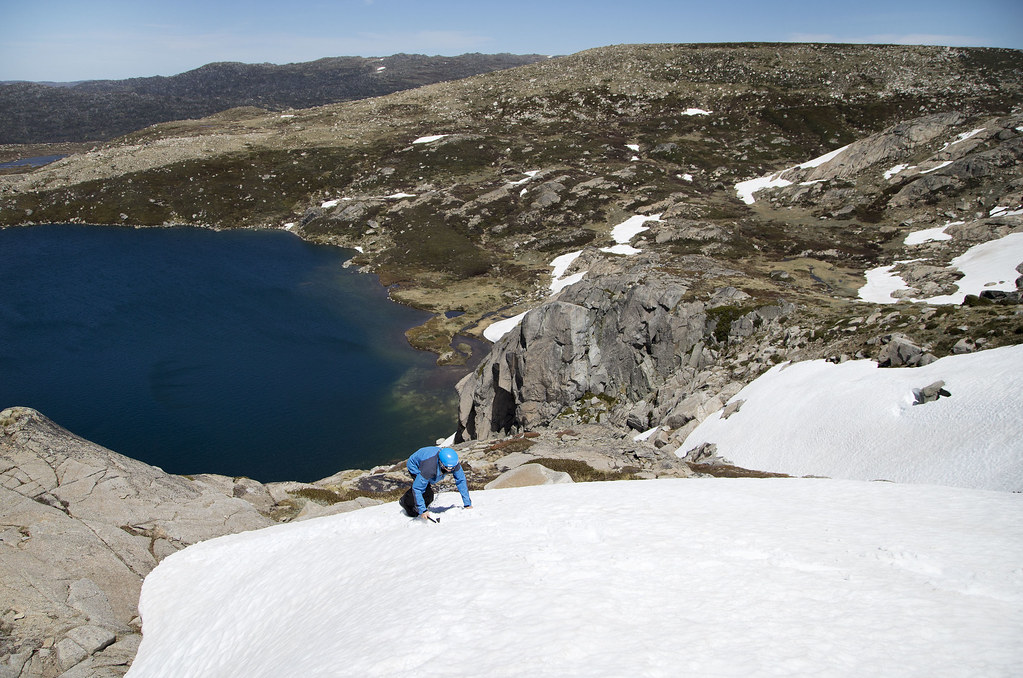 We then checked out the snow and it was about 5-10cm of spring slush straight onto a pretty solid ice base, perfect. Erryn dropped in and had a great ride to the bottom slashing the snow and enjoying the Aussie sun. He radioed up to me that the snow was a little unpredictable in places but it was fine to ride the steep face fast. My turn, I rode to the bottom and nailed it! How good is spring snow!? One thing that always blows me away is the scenery in Australia, going down a nice steep face and seeing a beautiful lake rise up at you is simply awesome. 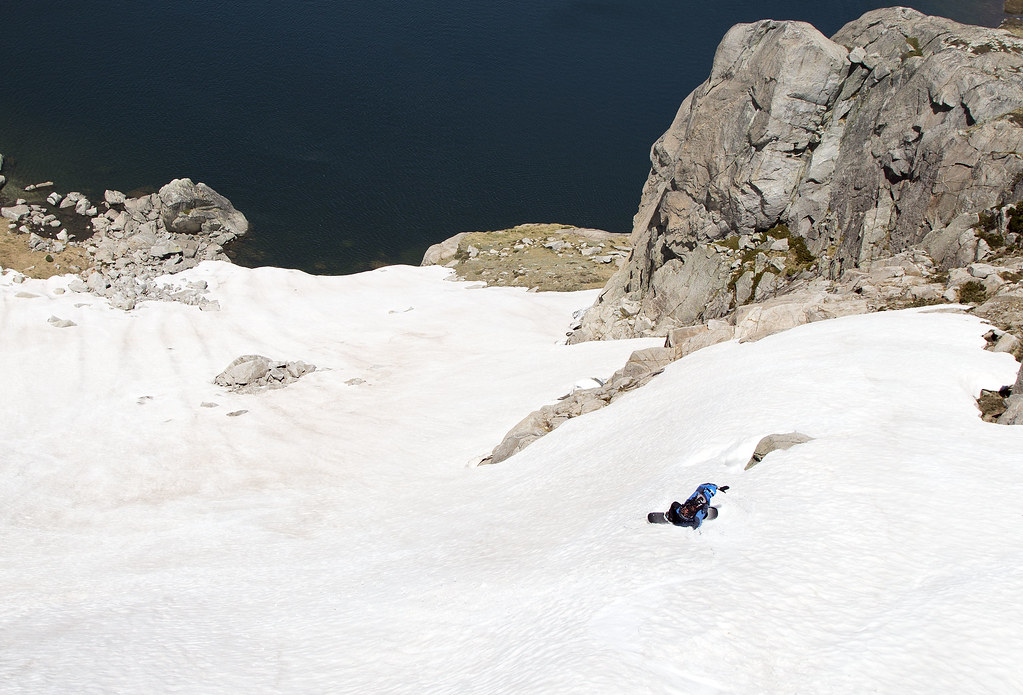 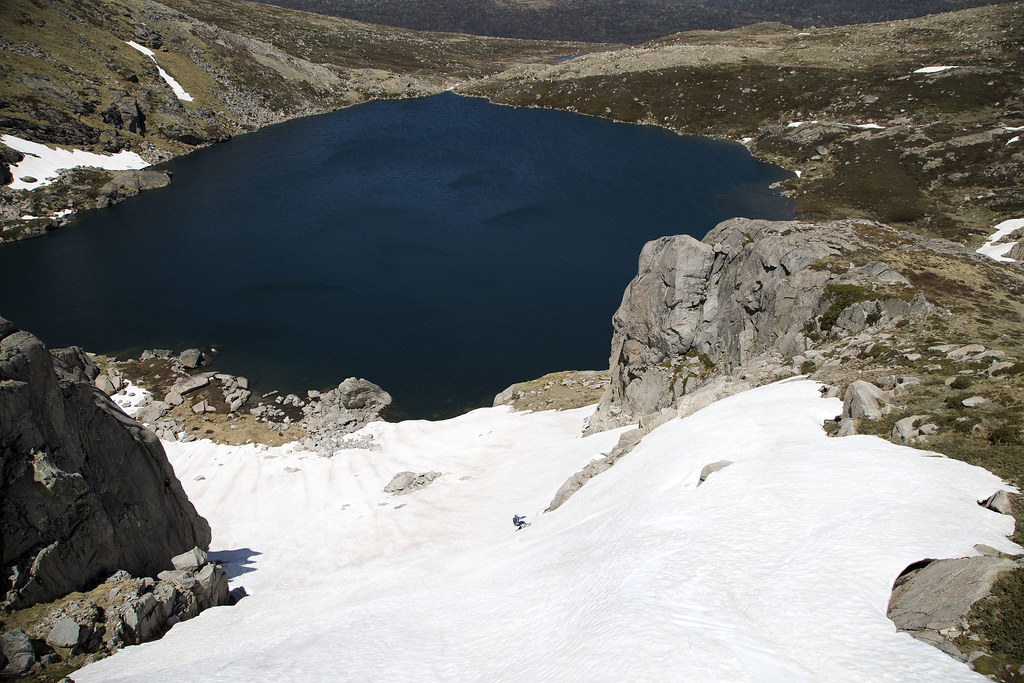 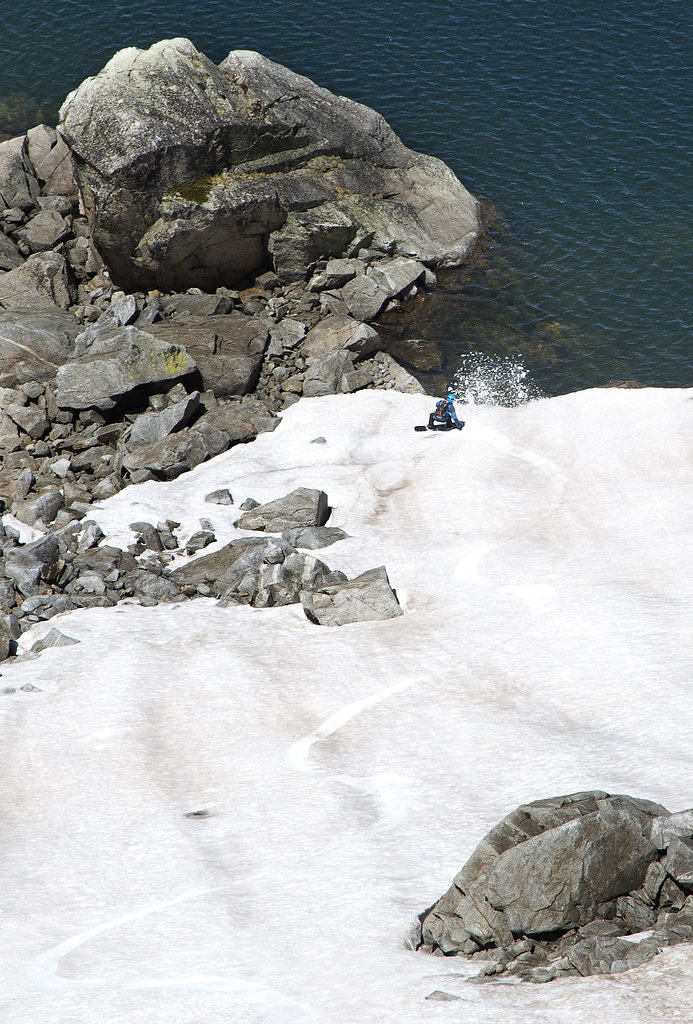 Using his crampons and ice axe Erryn began the long climb up the chute. The snow here was definitely different, about 5cm of spring corn clinging to a solid ice base. 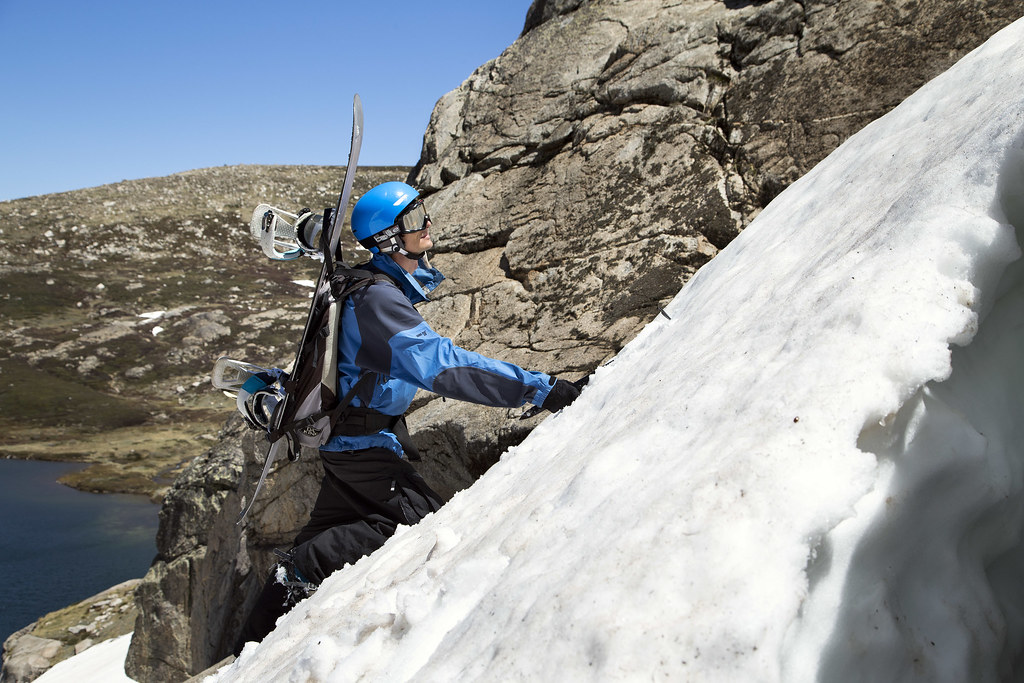 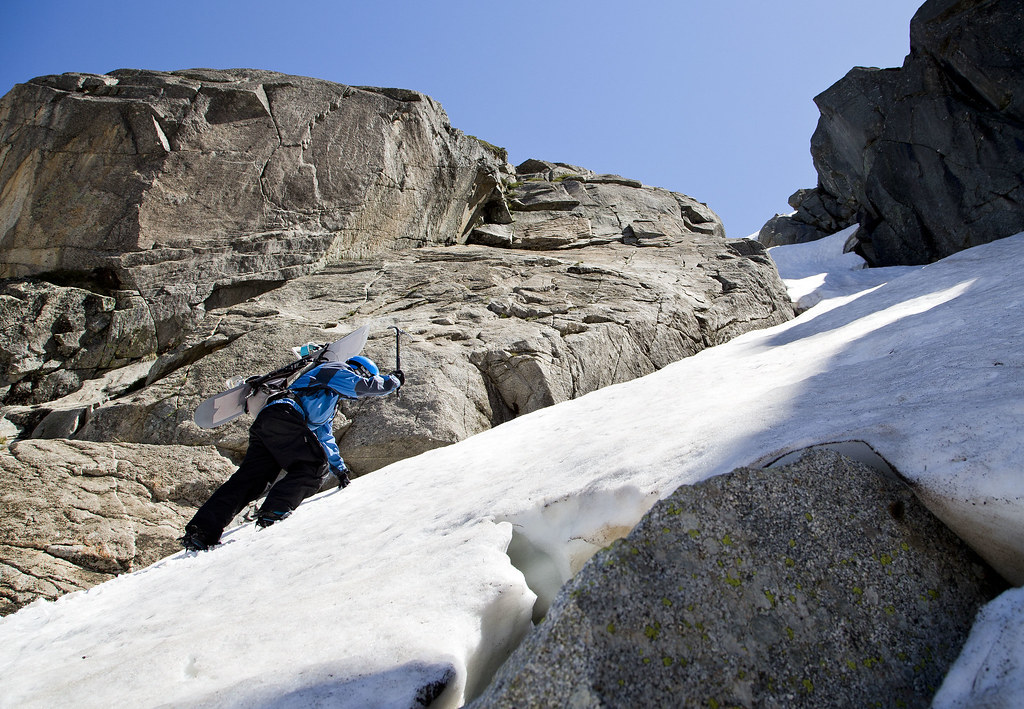 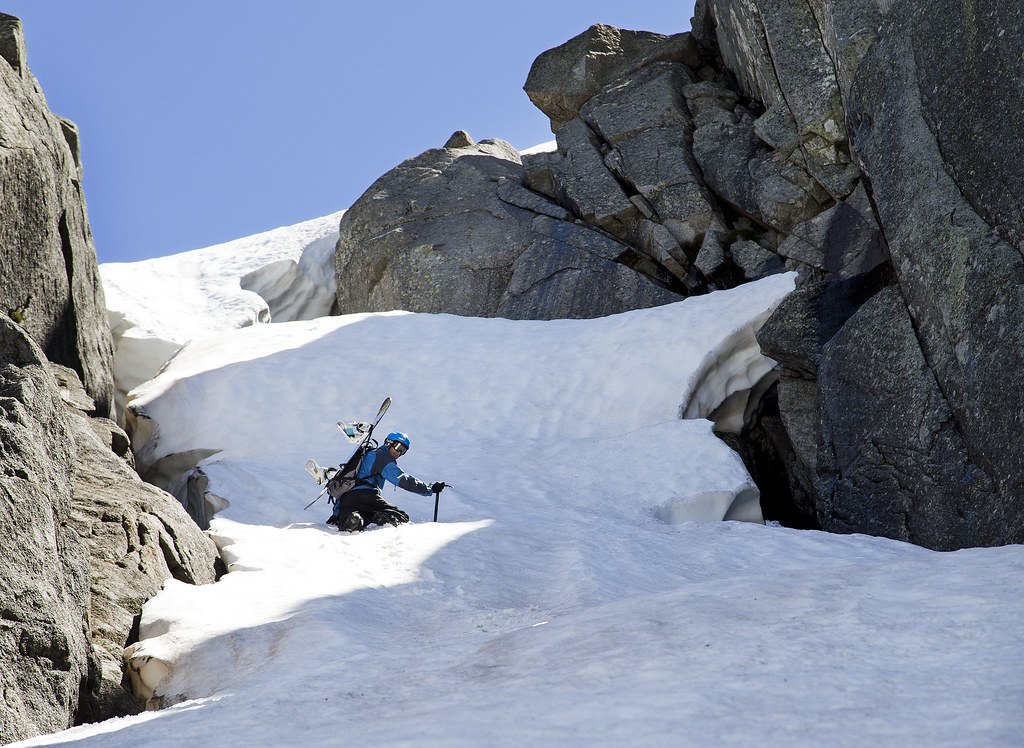 I set up, Erryn gave the ok and he dropped in. Pictures do not do this chute justice; those that have done it will know just how steep it actually is.

I was clicking away and then as Erryn got in line with me he did a huge slash. I lost him in the cameras viewfinder, there was snow everywhere. I freaked, thinking that he had fallen. There was a massive rock garden just below us and I thought he was a goner. I turned around, fearing the worst, but there he was, almost at the bottom and he was flying! What a relief! It would not have been fun conducting first aid after had he hit those rocks. Next it was my turn, I signalled OK to Erryn and I rode a super fun spring snow line, how good is this I thought again! We high fived, had a quick drink, a bite to eat and then started to head back to the cars. 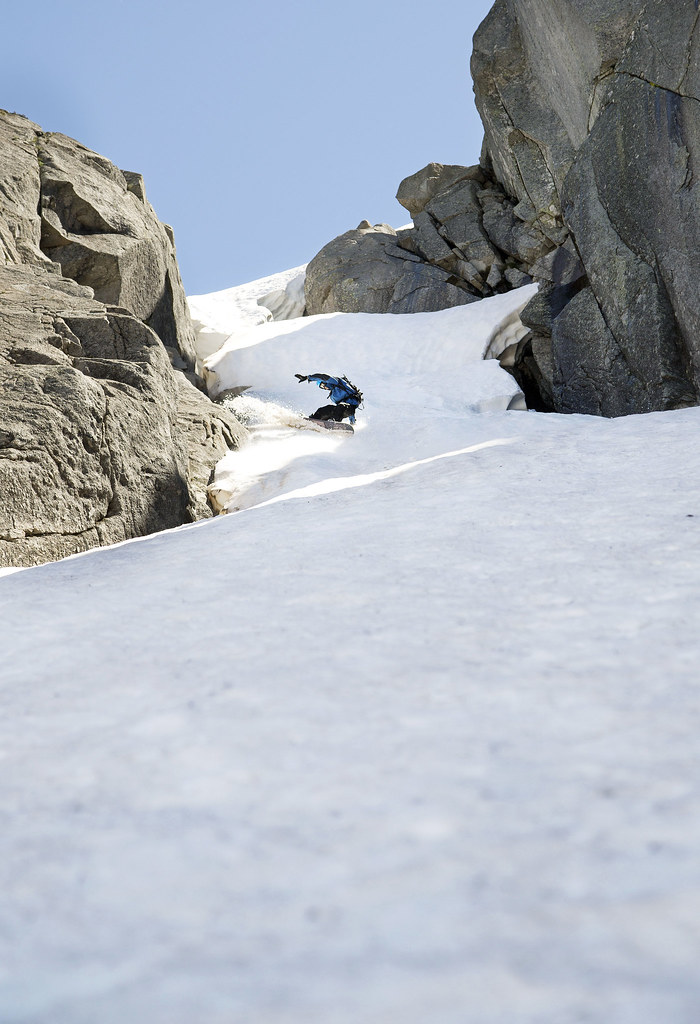 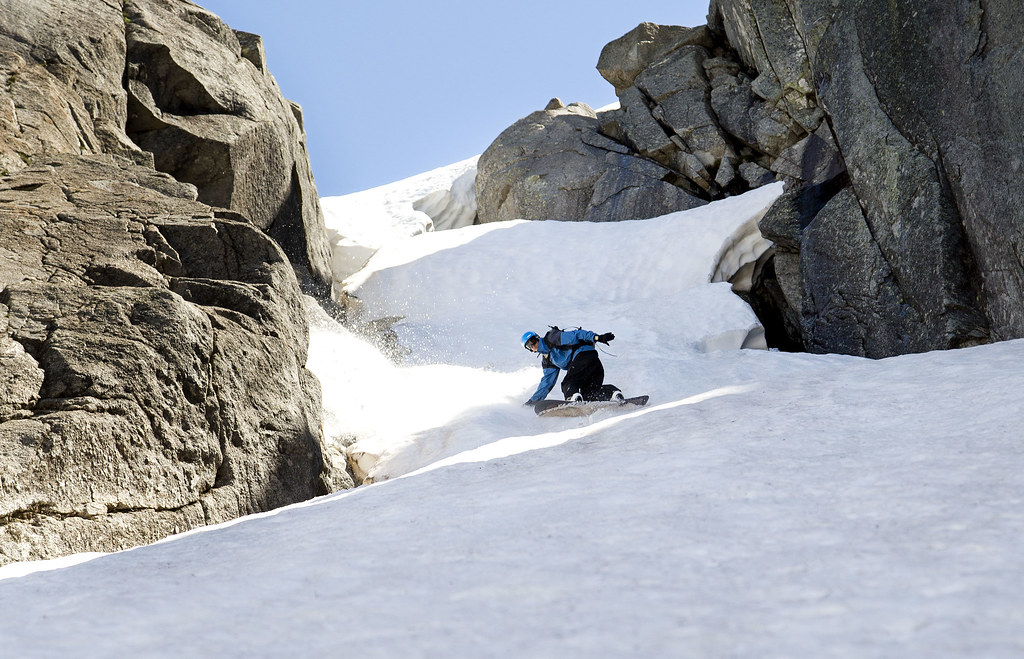 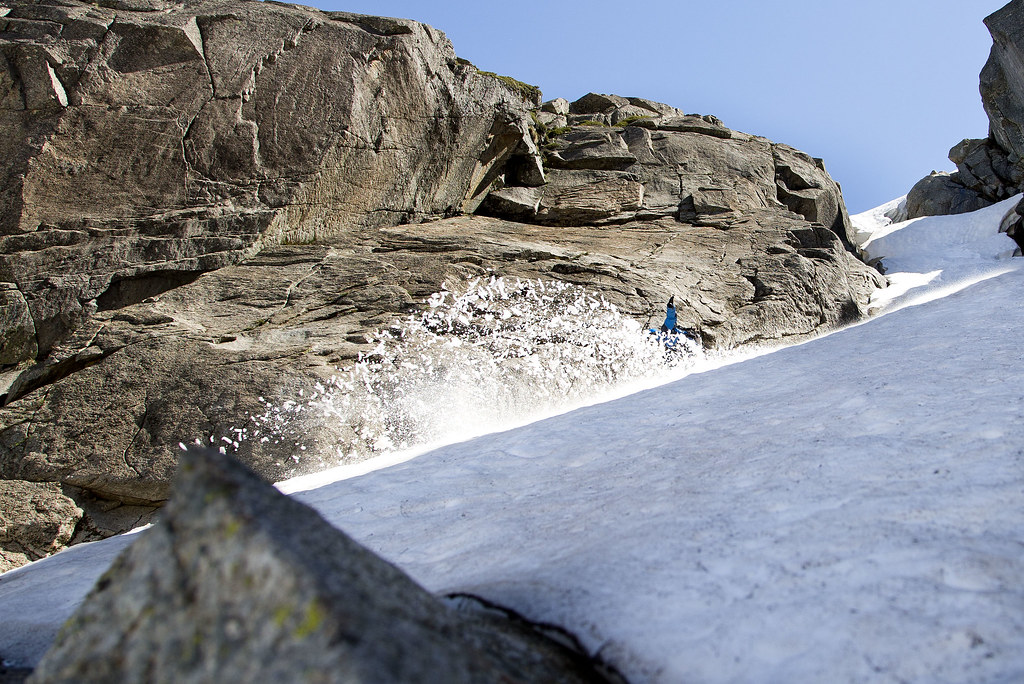 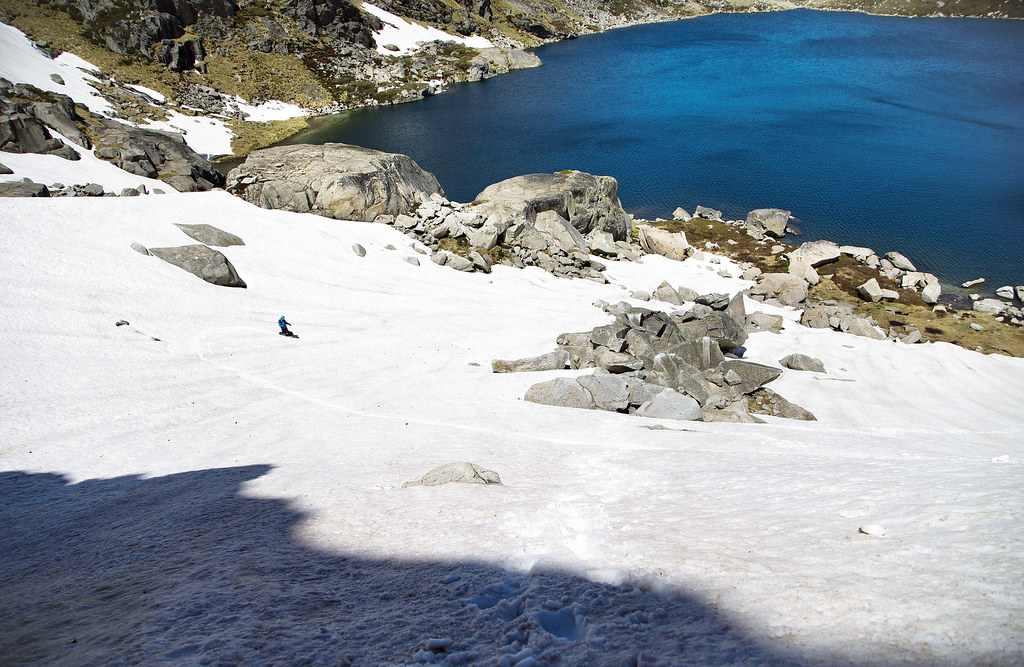 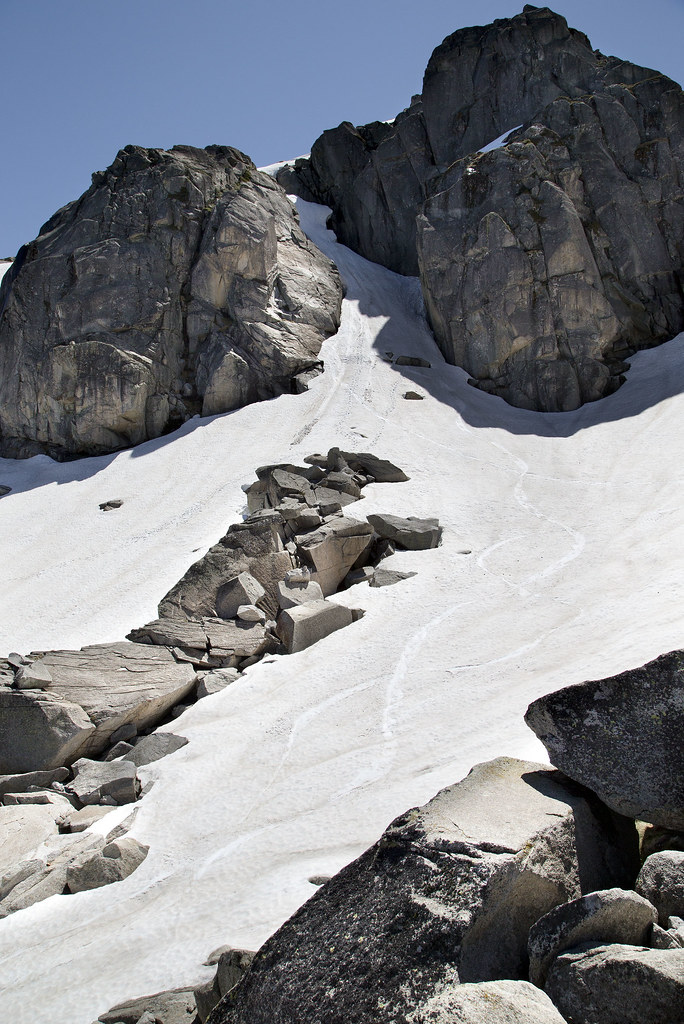 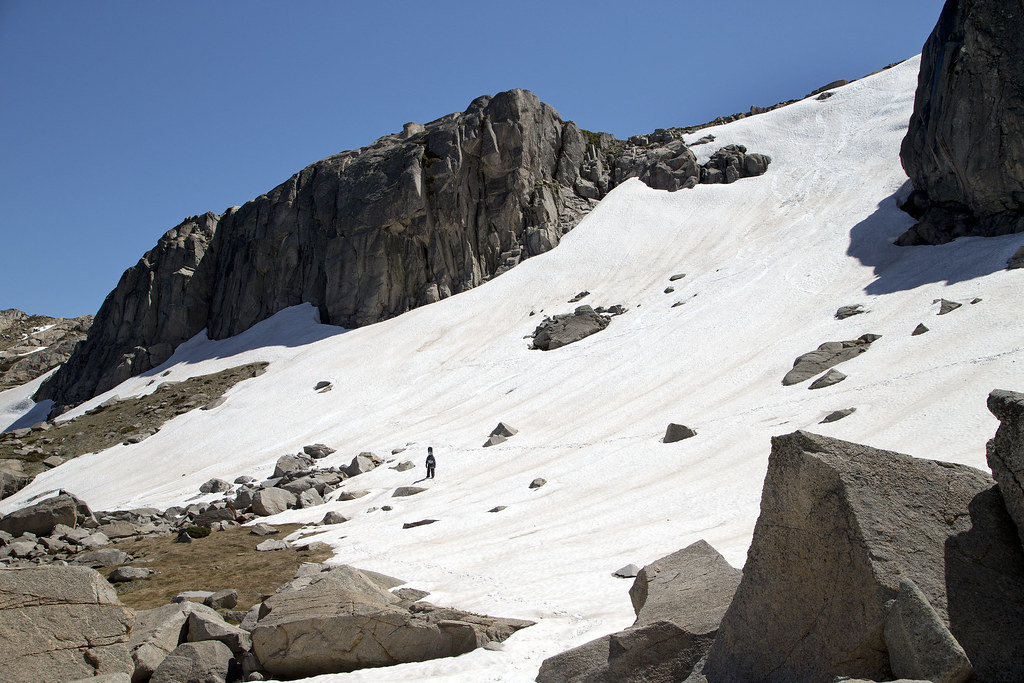 This is when I experienced the third most terrifying moment of my life. We were traversing across a steep face, an incline of maybe 35 degrees (again, trust me, the images don’t do this justice). Below us was the lake, the water approximately 3 metres deep. Erryn had already made it across so I picked up my pace. I took a step and found myself suddenly plummeting down the hill!

Everything was slow motion. I slammed down the ice axe into the snow, but to no avail. I positioned my body to carry out a self arrest with the ice axe. I tucked down straight onto the axe and put my whole body weight onto the head but I was still sliding. I glanced over my shoulder and the water was very quickly looming up at me. I distinctly remember thinking I have to ditch my bag as soon as I hit the water or I’m dead. By some miracle I came to a stop 3 metres from the water’s edge. Shaken, I climbed back up and finished the traverse. When I got to safe ground I sat down, and Erryn and I burst out laughing about how close I came to being in a very interesting situation only minutes before. The BC almost had the last laugh with me. 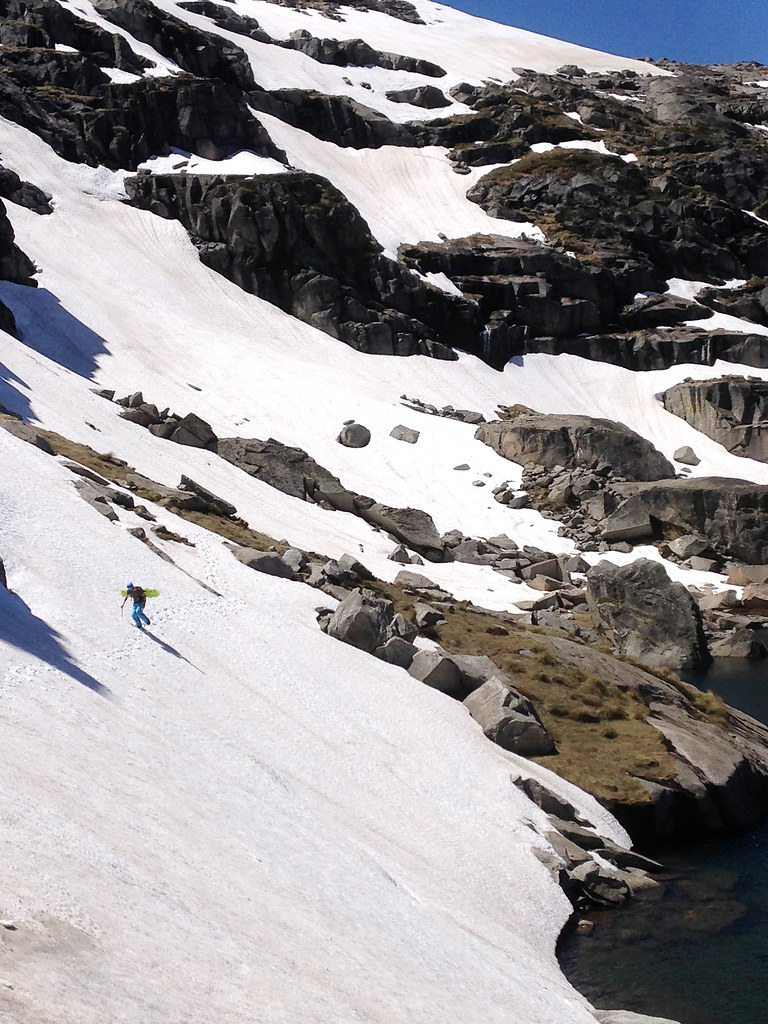 After i slipped, coming back up 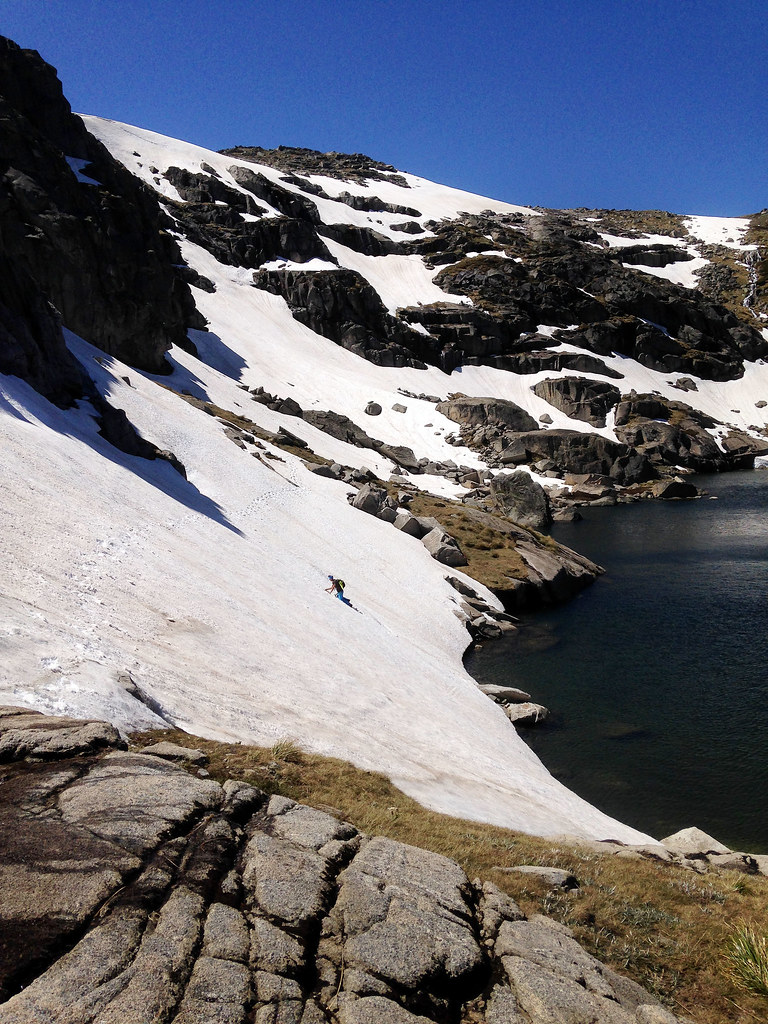 It’s like my snowboarding prodigy is all growed up :D

Erryn is the best dude to go riding with. Ever.

This is awesome. Thanks for sharing, and welcome to Boardworld.

I’ll push this through our social channels tomorrow.

It’s like my snowboarding prodigy is all growed up :D
Erryn is the best dude to go riding with. Ever.

Haha, not growed up yet mate, still plenty to learn, im just lucky i’ve had Erryn, yourself and Lu to push me along.

Erryns riding style is epic, so old school, so much fun

This is awesome. Thanks for sharing, and welcome to Boardworld.

I’ll push this through our social channels tomorrow.

Thanks mate, it sucks i didn’t know about this forum earlier, i could have done more BC trip reports during the season, i have plenty of images from winter trips as well

No worries, Jake. The photos are epic. Looks like it was quite the day out there! You’re here now and we’re looking forward to seeing more from you in the future.

Did ya ditch the underpants after the near swim experience?????

It was really cool to read this because my friends and I all hiked out that way for my birthday on October 31st. That was my first time out there too so it was great to see our backyard finally, after looking at it from a distance for so long.

It just made me keen for more! I’ll definitely be heading out there and going a bit further to check out some of these spots that I haven’t been yet.
And welcome to BW by the way. Pretty good entrance if you ask me

Here’s a few shots from our hike 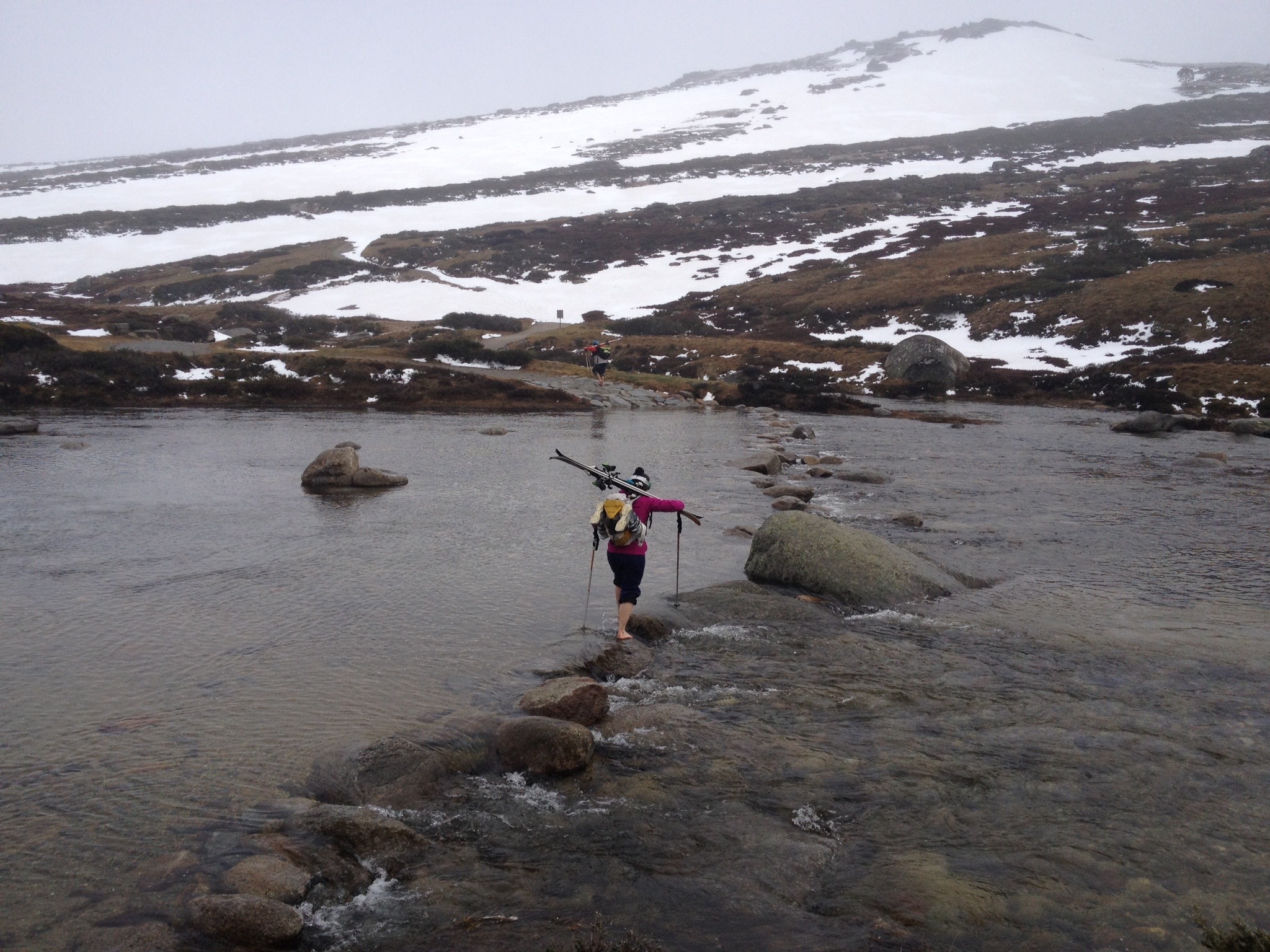 Jake, great TR! I thought it was good before I even got to your deathslide. Good work on the self-arrest!

Mizu, hahaha. Got him!

of course not! it’s the riding pow in a whiteout smiley